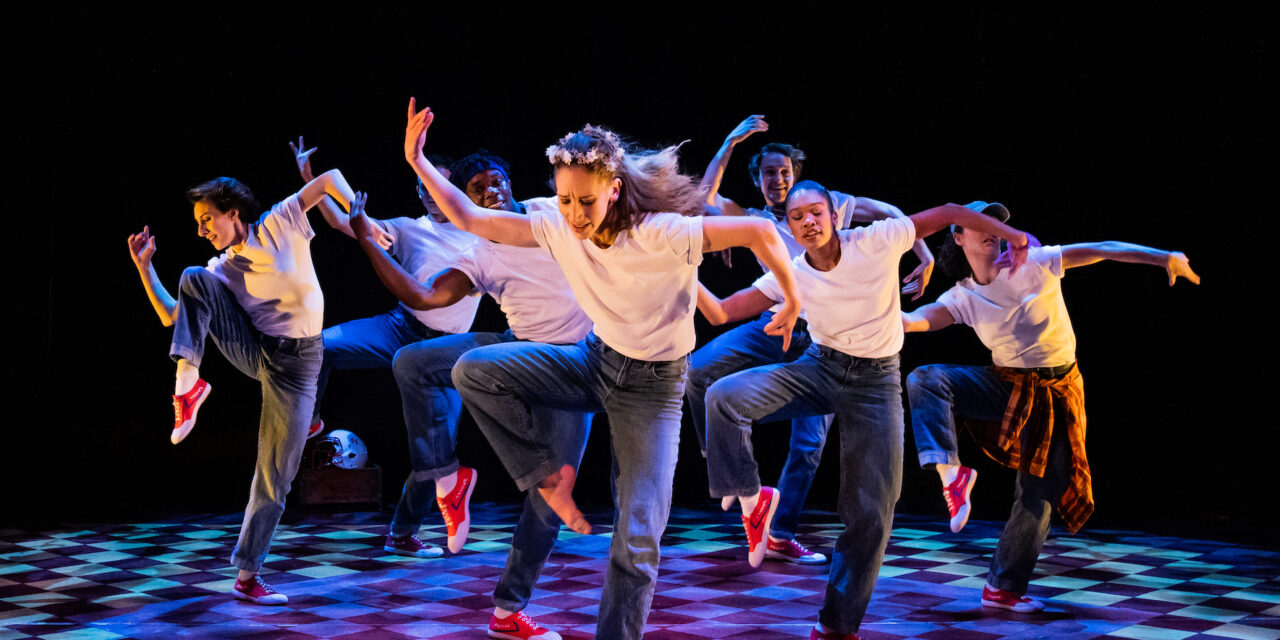 In November of 2019, in the bygone days prior to the pandemic, I attended a performance by The Chase Brock Experience dance set to Antonio Vivaldi’s Four Seasons at West 42nd Street’s Theatre Row complex. Loaded with commentary on our (sadly) still-current climate crisis, it was highly inventive and commanded a company of thoroughbreds. Now, after a long hiatus, a new work titled Big Shot has premiered in the same tight space, this time co-choregraphed by Brock and Travante S. Baker. Though not up to the creativity on display with Four Seasons, and outclassed by classic classical music, Big Shot has more than enough fine elements to recommend it.

Based on stories Brock was told to as a child, the piece is inspired by a family drive-in restaurant, once located in Hendersonville, North Carolina. Opened in 1949 by Brock’s grandfather, it remained in operation for twenty-three years, closing fifty years ago in 1972. A story has been crafted to showcase three generations from two separate families striving to “achieve the once sought after ‘American Dream’ at a time when America herself was losing her innocence,” as its production notes state. Using an original score from the combined talents of Paul Libman, Gary Apple, Rob Berliner, Jack Lechner, Mary Liz McNamara and Mark Pierce, it’s a broth with a lot of chefs that deliberately apes an ad-jingle sensibility in order to depict a specific era between 1967 and 1972. It leads to a sameness that makes the score overly generic, though it’s likely that was its intention. The opening notes of some songs are identical to memorable tunes such as the Beatles’ “My Girl” or Laura Nyro’s “Stone Soul Picnic.” It also brought to mind the ear worm of a Mentos commercial, catchy but disposable. It’s not coincidental that the main composer, Paul Libman, has extensive credits in the jingle business.

There are nineteen songs over a seventy-five-minute stretch, which makes for a lot of music. Happily, the dancers are equipped to handle all that’s thrown at them. Dressed in period white t-shirts, blue dungarees and red sneakers, West Side Story certainly comes to mind (though offering little in the way of finger-snapping). What little plot is driven across manages to stay focused, and it’s to the company’s credit that they are able to convey different characters with minimum hats and props. There’s an equal balance afoot, though I was taken with two dancers in particular. Cemiyon Barber displays a grace and power that’s undeniable and, when partnered with Lauryn Hayes, there’s magic in the air. The rest of the company I saw on opening night deserve praise as well. Jane Abbott, Jared McAboy, Ryan Fitzgerald, Bryan Letendre, Skye Mattox and Sara Elizabeth Seger are all stellar.

The time period allows for a lot of eclectic and spirited dancing, all tuned into the raging hormones of teenagers (and there’s nothing wrong with that). Brock and Baker keep the histrionics to a minimum and guide the troupe with finesse, be it when they take them on an LSD trip or simulate a hoe-down. Everyone from the Fifth Dimension to Tony Orlando and Dawn to Neil Sedaka seemed to be evoked.

So, if this sort of nostalgia trip makes you want to book a first class ticket, you would do well to experience The Chase Brock Experience’s Big Shot. It should prove a smooth ride.

Photo: Evan Zimmerman for Murphy Made