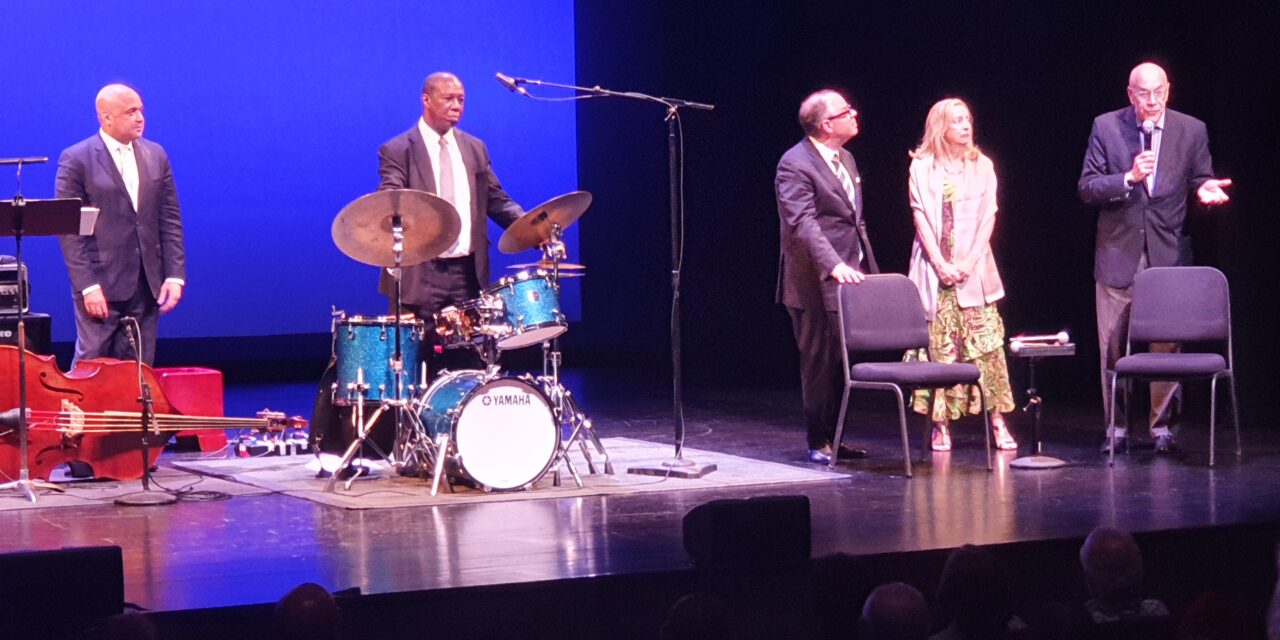 The Bill Charlap Trio presented conductor, composer, pianist and music educator Leonard Bernstein’s theater songs at the wonderful, nonprofit New Jersey Performing Arts Center (nearly always called “NJPAC”) in Newark, New Jersey.  This long-awaited show was delayed not once but four times by the pandemic.  There was one more hitch, as NJPAC host Ted Chapin had “the sniffles” and bowed out, leaving Mr. Charlap in the additional roles of host and interviewer.  The presentation combined stellar performances of Bernstein’s widely known theater compositions with an interview of Bernstein’s daughter, filmmaker and author Jamie Bernstein.  Signed copies of Ms. Bernstein’s book, Famous Father Girl: A Memoir of Growing Up Bernstein, were available in the lobby.

Mr. Charlap, a renowned jazz pianist and musical educator, is the scion of Broadway and jazz royalty.  His father was the late Moose Charlap, who composed the 1954 musical Peter Pan (ironically, unrelated to the 1950 Peter Pan composed by Bernstein).  Mr. Charlap’s mother is acclaimed jazz and cabaret singer Sandy Stewart.  The trio, together 23 years, consists of Mr. Charlap, bassist Peter Washington, and drummer Kenny Washington.  (Messrs. Washington share a last name, but are unrelated.)

Mr. Charlap opened with a piece from West Side Story that explored I Want to Be in America. He later confessed that he borrowed this approach from jazz pianist and composer Tommy Flanagan.  Kenny Washington’s strong, Afro-Cuban rhythms musically invoked Jerome Robbins’ choreography.

Of Bernstein’s six Broadway musicals, Mr. Charlap drew most heavily from West Side Story, On the Town, and Wonderful Town, all New York shows that captured the sounds of the city musically and rhythmically.  He took a more traditional jazz approach to “Lucky to Be Me” from On the Town, while “It’s Love” from Wonderful Town had an energetic finish, building excitement for the chat with Jamie Bernstein.  The remainder of the program alternated between a seated chat at stage left, and musical pieces by Mr. Charlap and the trio.

After some discussion of West Side Story with Ms. Bernstein, Mr. Charlap returned to the piano for a pair of songs from the show.  For “Somewhere,” he created great dramatic tension with voicings more in line with Rita Moreno’s tragic rendition from the 2022 movie remake, before the arrangement evolved into a jazz love song.  The dramatic ending somewhat mimicked the film’s gravitas before transitioning to “Cool.” The urgency in the bass and percussion created a palpable feeling of danger.

Mr. Charlap made a fine substitute for Ted Chapin.  A good interviewer, his knowledge and understanding of Leonard Bernstein’s mammoth musical contributions as well as his humanitarianism and activism (described as the legend’s “throughline”) informed the conversation with Jamie Bernstein.  The chat gave intimate insights into the maestro’s life and work, including a “big reveal” (stay tuned!).

Moving to “Glitter and Be Gay” from Candide, Bernstein’s 1956 operetta, Mr. Charlap transformed the piece somewhat, particularly a melody familiar to many older fans as The Dick Cavett Show theme, nearly unrecognizable here.  This alteration only added to the performance.  Mr. Charlap elaborated on some of Bernstein’s classical influences, such as Aaron Copland, Igor Stravinsky and Mahler.  He told an anecdote of Bernstein’s brave, bold confrontation of the Vienna Philharmonic musicians and their indifference in playing the music of Mahler, an Austrian Jew whose music had been banned by the Nazis until 1945.  “This is your music! I feel it’s also my music.  But it’s more yours,” Bernstein told the musicians, who then gave “the performance of their lives.”

A fascinating story provided both a musical lesson and an astonishing big reveal.  Discussing the tritone that is the “musical throughline” through West Side Story — whether in the first notes of the overture, in “Maria” and elsewhere– Mr. Charlap patiently explained what tritones are and how they work.  “The F sharp underneath the tritone at the end makes for a lack of resolution.”  (An analysis of the tritone’s use in West Side Story can be found here.) “Of course,” Mr. Charlap asserted, “we’ll never know where he got those notes.”  Ms. Bernstein replied, excitedly, “We do!!!”  Here, she revealed that the notes of the shofar — the ram’s horn used in Jewish religious ceremonies, particularly on Rosh Hashanah — made their way into Bernstein’s scores.

At Ms. Bernstein’s request, Mr. Charlap played a portion of “Lonely Town” (On the Town), solo, before seamlessly transitioning to a stunning rendition of “Some Other Time” from the same show, as the evening’s finale.  The song, played slowly and deliberately, had brilliant voicings by Mr. Charlap.

Every song performed was a Leonard Bernstein composition.  As the performance was entirely instrumental, the lyricists’ names were omitted above, but they included Stephen Sondheim (West Side Story), Betty Comden and Adolph Green (On the Town and Wonderful Town), and Richard Wilbur (Candide).

Celebrating the Theater Songs of Leonard Bernstein was well worth the wait.  Learn more about The Bill Charlap Trio at billcharlap.com.  For more great shows at NJPAC, visit njpac.org.