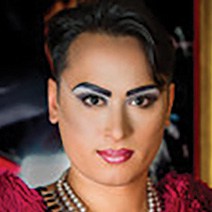 The Metropolitan Room was the perfect venue for Billy Lykken’s self-described “alt-cabaret experience.” In this intimate room Billy was right at home with an enthusiastic audience responding with cheering and “woo-wooing” to his fantastic range of characters, divas, riffs and personae, from drag-queen bitchiness to woman-scorned pathos.

In reviewing the song set list it became even more apparent the choice of songs were the key to the success of his performance. But let’s look at him first before we head to the songs he sang. Billy’s stunning smile lit up not only the room but served as the perfect prop to deliver the demeanor of the haughtier girls he morphed into during the show. Then poof: his smiled drooped, his shoulders slumped, his entire body changed and he became not a tough broad, but an unrequited lover or victim.

The personas can be paired with some of the songs he sang. What better way for Billy to convey a tough broad but through “You Wanna Bet” (Cy Coleman and Dorothy Fields): “Taunt me, call me a pest, but quite strangely, you’ll be impressed.” Or through “I’d Like to Hate Myself in the Morning” (John Meyer): “I’d like to hate myself in the morning,/And raise a little hell tonight.” Billy belts out these and other songs of their ilk with bravado. But his renderings of desperately vulnerable women is where Billy excels. In his versions one feels the pathos, yearning, and despair of all the women (and men!) ever scorned. Billy brought tears listening to him delicately pitch, while dressed in a kimono, his Japanese version of “Poor Butterfly” (Raymond Hubbard). His voice softened in “Be the One” (Nicholas Gale, Jack Tarrant, Lucy Taylor) when he whispered “I was wrong/ Come back to me, baby, we can work this out . . . ” And for each of the 17 songs he did (yes 17!) he either brayed strength or quietly reaffirmed fear.

A few times Billy missed the mark on the high notes and relied a little too much on all-too familiar caricatures of a pre-Stonewall drag queen “scarred,”  “afraid,” or “living in the shadow.” But with the skillful accompaniment of the piano (Yasuhiko Fukuoka, who was also musical director), drum (Simon Fishburn) and bass (Marco Panascia) combo, Billy (along with Rick Skye, who co-wrote and directed) gave the audience exactly what we needed: the pleasure of hearing and seeing an artist at work doing amazingly different things.