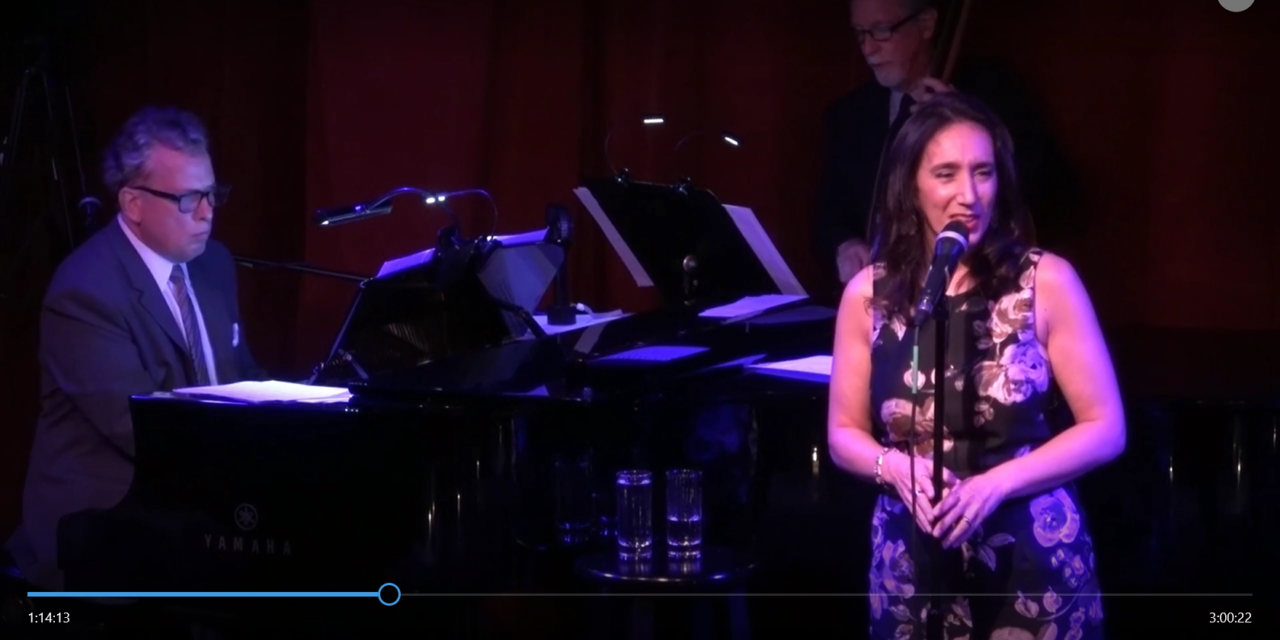 Mel Tormé and Ella Fitzgerald were two of the greatest jazz artists of the twentieth century, masters of singing and performance whose legacy continues long after their deaths.  When you are paying tribute to such legends, you’d best be on your game.  When you’re already on your game, this means reaching even higher.  For a lucky Birdland live (and livestream) audience, Billy Stritch and Gabrielle achieved just that, and then some, with their spectacular Mel and Ella Swing! on September 18.   Mel and Ella never did a show together; their musical meetings in television guest spots were few, and over too soon.  This performance was a taste of the “concert that never was.”

With Billy Stritch is an exceptional pianist, arranger and singer whose vocal style seems to combine the best of Mel Tormé and Buddy Greco.  Billy has accompanied everyone from Liza Minnelli to Tony Bennett, and has helmed the Cast Party with Jim Caruso trio at Birdland for nearly two decades.  As musical director for the show, he adapted many of the legends’ arrangements associated with Tormé and Fitzgerald that were written by the likes of Nelson Riddle, George Shearing, Marty Paich, and Tormé himself.

Billy opened the show with a snappy medley of “Just One of those Things” and “Green Dolphin Street.” Backed by bassist Pat O’Leary and drummer Mark McLean, Billy had a marvelous scat solo that seemed to quote, appropriately, “We’ve Got a World of Swing,” (recorded by Tormé).

Gabrielle Stravelli, an extraordinarily gifted singer and songwriter who can swing, scat, sing a Broadway tune straight, and make a killer album of Willie Nelson songs, took the stage for a very swinging “I Won’t Dance.”  She “gave props” to Ella Fitzgerald as one of her first teachers (through recordings and television clips).

The playful repartee between Gabrielle and Billy was just one aspect of their performance chemistry.  While each was excellent in their solo numbers, it was when the two teamed up for duets that the show delivered its most electrifying moments.  A slow, rubato duet all the way through “Just in Time” became another swinger, with the pair trading lyrics.  When they sang together in harmony, they evoked the spirit of Jackie and Roy, the jazz vocal team consisting of singer Jackie Cain and her husband, singer/pianist Roy Kral.

Tormé’s original lyrics for “Walkin’ Shoes” (tune by Gerry Mulligan) is filled with the kind of clever couplets you’d hear in a Dave Frishberg song.  Later in the number, Billy and Gabrielle used some new lyrics, with a brilliant scat duet.  Though only Gabrielle sang “Night and Day” (based on the Nelson Riddle arrangement for Ella’s Cole Porter Songbook), Billy played a delicate piano dance around her singing.  After utilizing the song’s verse as its bridge, the number took on a Latin beat, building to a powerful crescendo before returning to the slow tempo of the start – something of a Nelson Riddle trademark.  Riddle often wrote seductive arrangements suggesting foreplay, wild abandon, climax and some pillow talk.

Gabrielle told a sweet story of her mother pushing her to sing “So Rare,” made famous by the Jimmy Dorsey Band, and was her parents’ “first dance” song.  She demurred for years but finally relented.  It was a beautiful moment in the set, and, with her mother watching at home via livestream, looked into the camera and declared, “You were right, Mom!”

Billy did great justice to one of Mel Tormé’s most iconic Marty Paich arrangements on “Lulu’s Back in Town.”  This reviewer was fortunate to have seen Tormé in concert seven times, and “Lulu” is a favorite of mine.  Billy nailed it.

Ella Fitzgerald recorded some 200 albums and over 2,000 songs in her long career.  Eight albums comprised her “Songbook” series, including Ella Fitzgerald Sings the George and Ira Gershwin Songbook.  After she passed in 1996, Ira Gershwin said, “I never knew how good our songs were until I heard Ella sing them.”  Gabrielle did a fine job on a pair of Gershwin tunes, “I Got Rhythm” and “The Man I Love,” the latter in a beautiful, perfect reading with little embellishment.

Billy and Gabriel’s magic continued with several increasingly complex, tight harmony duets, with a brilliant closing medley that they clearly worked very hard to perfect, which included “I Hear Music,” Fascinating Rhythm,” “Exactly Like You” and, finally, a breathtaking “Lady Be Good.”

Photos from Birdland’s livestream on flymachine.com.