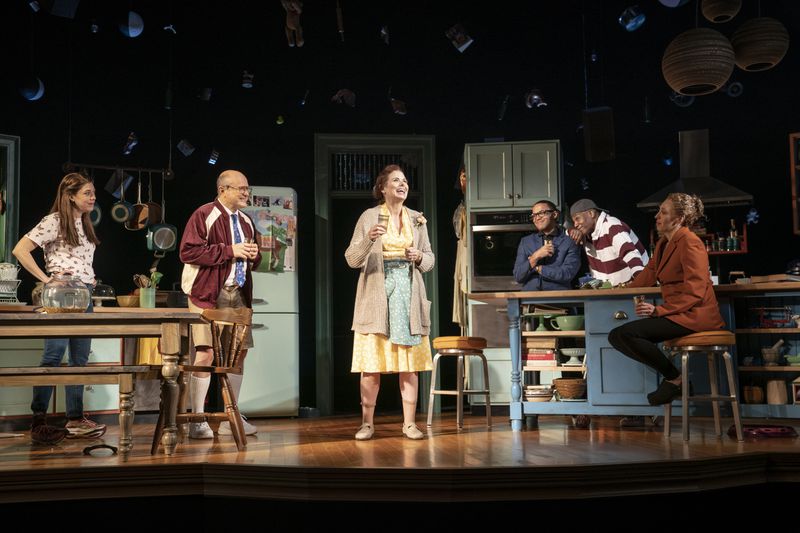 The effervescence of life . . .  we repeat rituals, saying the same little dogmas and platitudes to family and friends as if laid down in stone hoping to influence as we move forward in this time capsule of life.  And so it is with Birthday Candles – an often sad and truthful commentary on what it means to be human. The play, written by Noah Haidle, creates the timelessness of repetition, an ode to aging and the memories we hold so dear. Ah, young folk, take note as you, too, will find yourself with new life perspectives as the years pass.

Ernestine (a wonderful choice Debra Messing) makes her way from age 17 learning the birthday cake-making ritual taught to her by her mother (Susannah Flood whom, as many of the supporting cast, takes on multiple roles) – the then 18 year old Kenneth (loveable Enrico Colantoni) moves through Ernestine’s life from prom to old age, each year bringing her birthday presents in the same kitchen with everyday life objects hanging in the ‘sky’ (timeless design by Christine Jones) and where a lifetime of love, sorrow and sadness passes. The existential reverberations are not lost on us when this idealistic 17 year old teen speaks of wanting to “meet the divinity within herself.”

But we never miss a birthday as Ernestine continues not only the cake-baking tradition, but the ritual of measuring the growth/height of family members, passing it down the generational line. She continues to receive yearly presents from her admirer, not so secretly in love with her Kenneth, who eventually becomes her husband (when she and Kenneth reach their 80’s) after death and divorce have taken their spouses.

Noting Debra Messing’s interest in this role – – nice to see her close up and personal on stage as opposed to on a TV screen. She is surely a fine actress morphing thru life from 17 to 107!

Director Vivienne Benesch does what she can molding the cast in this challenging script, but I wonder how the repetitiveness might have been eased giving voice to other issues. Have we learned something? You’ll make your own cosmic connections and conclusions and will learn lots about cake-baking. 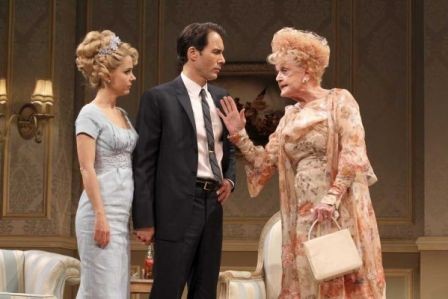