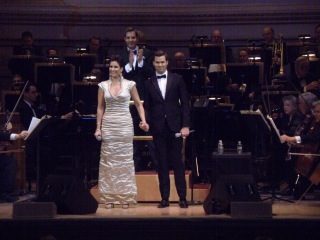 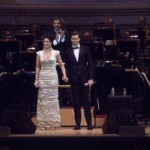 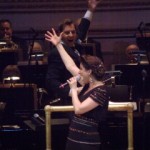 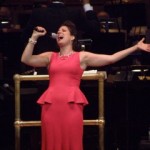 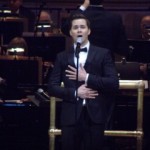 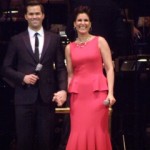 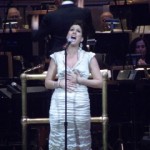 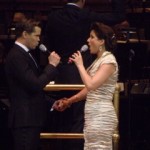 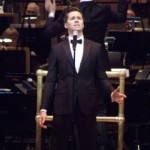 Some of the greatest songs of the Great White Way wafted through Carnegie Hall on Friday night, as the New York Pops – joined by Tony Award nominee Stephanie J. Block and Andrew Rannells – gave their regards to Broadway in a delightful two-and-half-hour concert.

Block, who possesses a rafter-raising belt, along with superb acting abilities, scored knockout after knockout in her solos, starting with a punchy “Don’t Rain on My Parade” (from “Funny Girl”), followed by a touching take on Stephen Sondheim’s “Children Will Listen” (from “Into the Woods”). In the second act, she almost literally brought down the house twice – first with a soaring, beautifully wrought “Meadowlark” (from “The Baker’s Wife”) and then with a deeply felt, extraordinarily sung version of “Defying Gravity” (from “Wicked”).

Rannells, who starred in Broadway’s “The Book of Mormon” and who has gained newfound popularity on HBO’s “Girls”, proved his mettle with a pair of very different selections from Stephen Flaherty and Lynn Ahrens’ “A Man of No Importance”: “The Streets of Dublin” and “Love Who You Love.” His finest moment, unquestionably, was his passionate and compassionate take on his last song, “Being Alive,” in which the handsome and charming actor showed he would be perfect as Bobby should anyone care to revive (again) Stephen Sondheim’s “Company.”

The pair’s duets weren’t quite as thrilling as their solos, though, with the notable exception of Sondheim’s glorious “Move On” (from “Sunday in the Park with George”), which brought chills to the spine.

The Pops, under the direction of conductor Steven Reineke, also gave themselves numerous opportunities to shine, with medleys from “Gypsy” and “West Side Story,” to Richard Rodgers’ gorgeous overture to “South Pacific” and his “Cinderella Waltz.” But I was particularly taken with their delicious versions of Flaherty’s “Ragtime” and John Kander’s lesser-known “Gimme Love” (from “Kiss of the Spider Woman”).

Then again, whenever the Pops give their all, whether on Broadway material or not, it’s sure to put a smile on your face and tap in your toes.