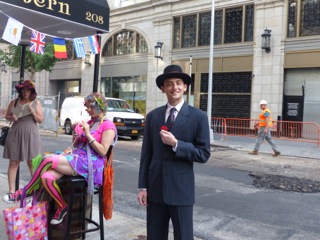 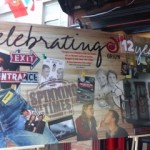 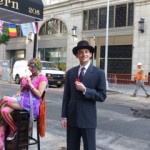 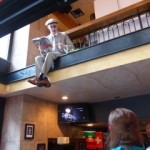 A bouquet of distinguished actors and luminaries helped Origin Theatre Company and new Irish bar and restaurant Bloom’s Tavern, 208 East 58th Street, rekindle a New York literary-theatrical tradition with a site-specific Bloomsday Breakfast on Monday June 16, from 7:30am to 10am. 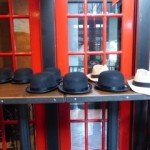 Staged by Origin, the feastivities featured Conor MacNeill (currently on Broadway in the “The Cripple of Inishmaan”), Sean Mahon (who starred on Broadway in “The Seafarer” and “The 39 Steps”), Jo Kinsella (“For Love,” and the Irish Rep’s “Dancing at Lughnasa”), Jimmy Kerr, Fiona Walsh and Terry Donnelly. Also taking part in re-enactments of scenes from James Joyce’s “Ulysses”were the beloved actor, activist and author Malachy McCourt, as well as the New York-based Irish folk star Allen Gogarty. Ireland’s out-going outgoing Consul General in New York, Noel Kilkenny, welcomed everyone to the breakfast. 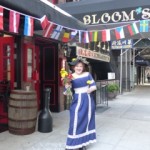 “We’re looking forward to making this a new annual event,” says Bloom’s owner John Mahon, who, with Eugene Wilson and Noel Donovan, heads up a restaurant group that includes Theatre District mainstay Langan’s. According to Mahon, Bloom’s Tavern takes its name as much from neighbors Bloomberg L.P. and Bloomingdale’s as it does from the Joyce protagonist Leopold Bloom.

“The Bloom’s Bloomsday Breakfast will change from year-to-year,” says Origin Theatre’s artistic director, George C. Heslin. “It all derives from Ireland and Dublin, but somehow the novel, and the day June 16 in which the novel takes place have enormous worldwide resonance.” He adds, “While recognizing its Irish roots, we see this as an international event.” Origin produces the New York premieres of plays by contemporary European playwrights, as well as the highly regarded Origin’s 1st Irish Festival — the world’s only theatre festival dedicated to Irish playwrights — every September. 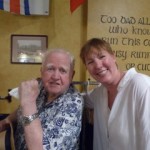 James Joyce first serialized “Ulysses” beginning in 1918. Considered a masterpiece of modernism, it was banned in the U.S. before the book was published in its entirety in France in 1922. The tradition of June 16 observances goes back to 1924.

43 European playwrights have been introduced to US audiences by Origin, including such distinguished writers as Enda Walsh (“Once”), Mark O’Rowe (“Terminus”), and Lucy Caldwell. For more information visit www.origintheatre.org or www.bloomsnyc.com