Bolcom & Morris: When the World Was Young 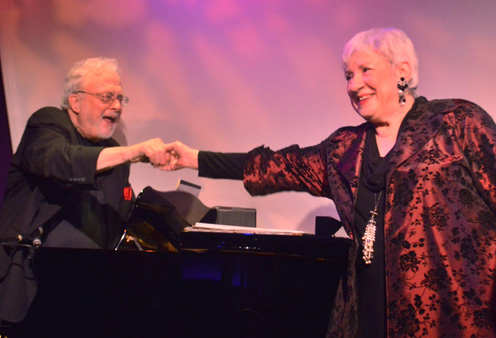 Composer/pianist William Bolcom and vocalist Joan Morris have been performing together forty-two years. This is my first exposure to the veteran couple. I’m among a minority tonight. Selected songs date from 1894-2015, the former offered respectfully as written- not pastiche, the latter, delivered with the insouciance of more devil may care days..

Several very early numbers exemplify low key style. “On the Banks of the Wabash, Far Away” (Paul Dresser) capitalizes on Morris’s current alto range and slight nostalgic tremor. “Weary” (Andy Razaf/Eubie Blake) is almost monotone, yet right on emotional target. Gravity shouldn’t drag, but must be present. One has to empathize with these lyrics to share them effectively.

Bolcom found Dan Dougherty/Jack Yellen’s “You Can’t Sew a Button on a Heart” on a Sophie Tucker recording. It’s a patter charmer. Morris is advisory and modestly flirty without attempt to parrot Tucker’s oomph. The song is neatly bowed with a grosgrain ribbon. “I Happen to Like New York,” (Cole Porter) arrives expansive; phrases elongate, feeling reads almost exalted. A last farewell rings like a bell. Sheldon Harnick’s eloquent “Just a Map” (The Rothschilds) emerges tender and jewel like, its author looking on from a corner booth. Two very different droll takes are “Humphrey Bogat” (Jerry Lieber/Mike Stoller) and “I Only Drink Champagne” (Jerry Stock.) Morris’s eyes grow kewpie-doll-wide for the first. Hands clasp at her heart, then extend welcoming…just be mean to me…they beat her chest, an enthralled fan. The second actual response to being offered wine at a party, was overheard, inspiring this well crafted ditty. Morris tosses it off with equal parts sophistication and enunciation. Mr. Porter would’ve grinned.

Bolcom occasionally plays too fast leaving Morris to gamely keep up the best she can. Numbers like the nifty “What It takes To Make Me Love You-You’ve Got It” (J.W. Johnson/ James Reese Europe) diminish what might be otherwise savored at this pace. He’s also a bit long on stories that will only interest fellow musicians. On the other hand, a tale of meeting Eubie Blake, who was captivated by his then girlfriend, Morris, is utterly appealing.

The vocalist strains at her upper register but interpretative skills are honed and appealingly personal. I did, however, miss her looking at instead of towards us.

A genial evening with a couple of classy musicians.