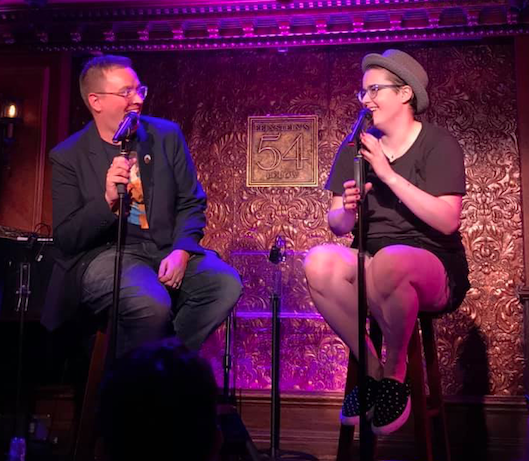 All was buzzy and bright inside Midtown hotspot Feinstein’s/54 Below last week, when the second installment of Tuesdays at 54… with Robbie Rozelle!, the brassy, sassy talk show/game show/open mic hybrid, kicked off at the intimate venue. And the evening was so jam-packed with jokes, jabs, performances and proclamation, it’s apt to say, in the best way, it wasn’t just Broadway alum Justin Guarini, the evening’s lead guest who crooned the Sondheim staple, who was, to complete the lyric, “losing his mind.”

From start to finish, our stalwart emcee does much to keep the evening moving; his natural charisma and knack for lobbing a joke across the room keeps the mood light and bouncy throughout, as does the wildly appealing and easily digestible format in which the evening’s presented.

Following his short — but necessary — opening rant, which spanned the recent Little Shop casting news, the Tea at Five debacle, and the infamous, outrageous Cats trailer, Rozelle was joined by the aforementioned Idol finalist, who dished on his pre-Idol life as a door-to-door ADT alarm salesman, ditching the Main Stem for his Idol opportunity — and eventually finding his way back — and his long-anticipated dreams for a Broadway-themed album (“if only you knew somebody with a record label,” Rozelle cracks), while plugging his enlivening, enlightening, inspirational new podcast — with a legendary luminary first guest, natch — and serving up a “see-it-to-believe-it” Disney-fied twist on the recurring series segment, “The Week in Patti LuPoneTweets.” 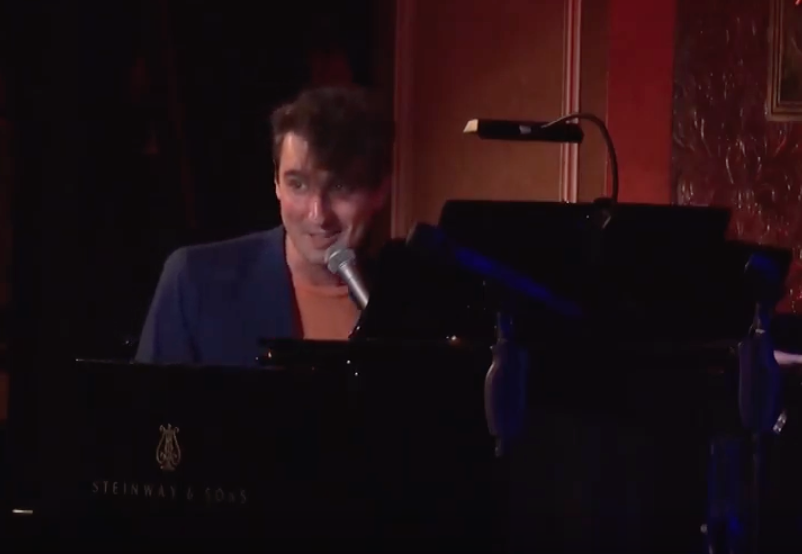 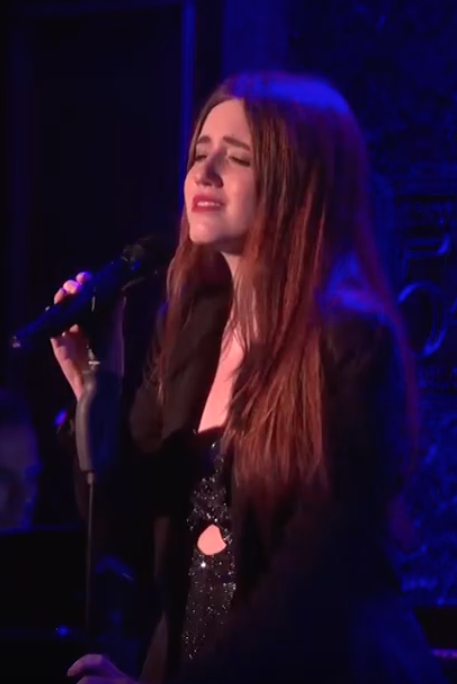 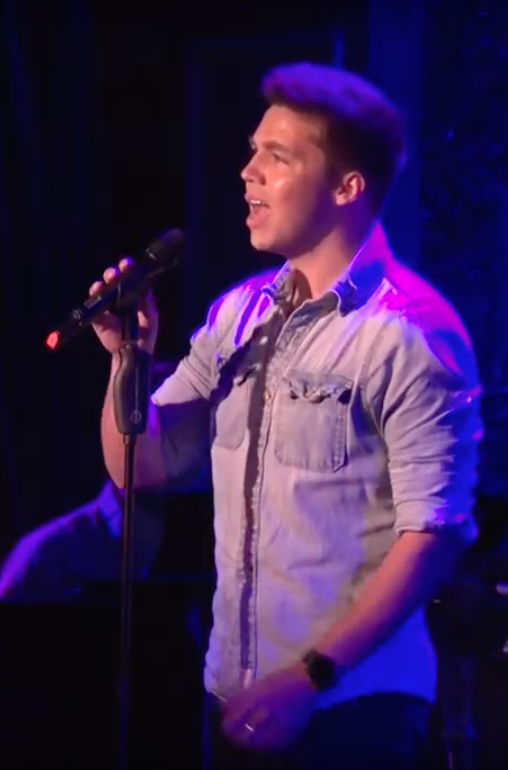 As is #Tuesdays tradition, a troupe of young, emerging talent — with Christian Eble, Katie Welsh, Matthew Kemp, Zach Bravo and Emily Wronski among the roster this time ‘round — then took to the stage to offer their take on staples from Dear Evan Hansen, First Date, Finding Neverland, A Star is Born, and the catalogue of Adam Guettel. Songwriter and A Musical about Star Wars creator Billy Recce was also on hand to perform a ROFL original tune. 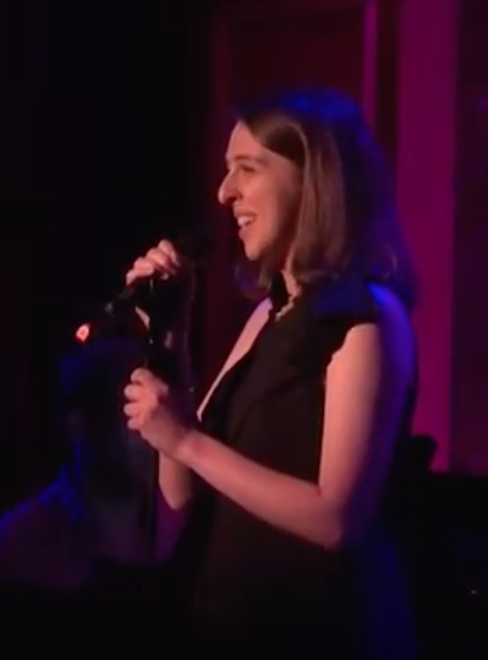 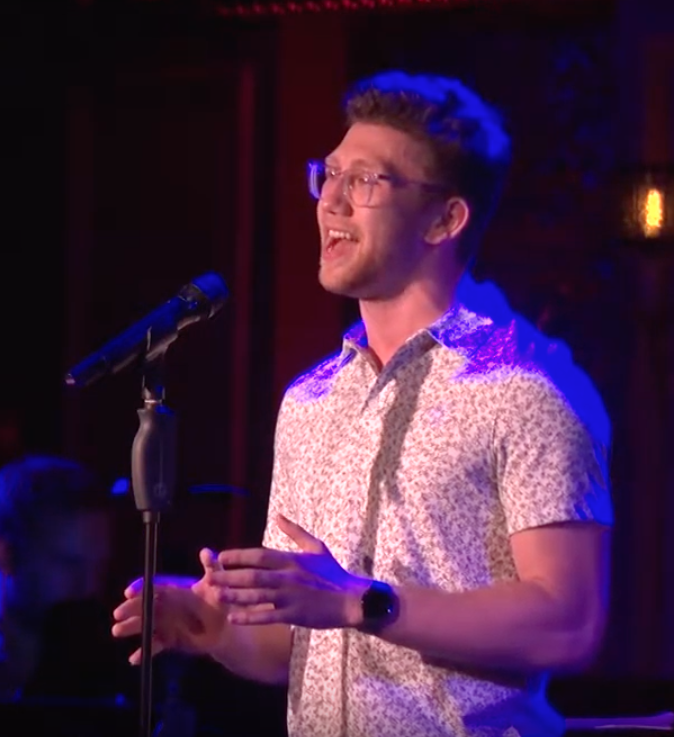 But perhaps the most poignant and powerful part of this particular installment — likely in light of recent events — was the moving conversation championing diversity, courtesy of guest Caitlin Kinnunen.

“It’s all about being honest with yourself and other people,” said the The Prom standout, on the subject. “You shouldn’t judge anyone based on their sexuality, because you don’t always know their sexuality.” With the topic of judgment on the table, Kinnunen also subtly knocked the naysayers who ignited the Macy’s Thanksgiving Day Parade controversy, stating, “It’s a human moment. It’s not a big deal. It’s two people who are in love and they’re just kissing.”

“This needs to be seen,” she continued, in reference to the televised smooch. “It’s love and it shows that families can look like anything. It opens up a conversation, which is exactly what we’d all want it to do.”

And she didn’t stop there, the “conversation” went a step further, advocating for social media users to promote “real life” through their platforms.

“People project their perfect selves on social media, and that’s not just real,” she stated, bluntly. “Nobody lives like that… nobody’s perfect. We’re all feeling [unsure at times], so if we just talk about it, it’ll make all our lives a whole hell of a lot easier.”

Mic drop. Enough said. And for that, we’re, justifiably, “losing our minds.”

Tuesdays at 54, hosted by Robbie Rozelle, continues at Feinstein’s/54 Below (254 W. 54th Street) on August 20th and 27th. For tickets and more information, visit www.54below.com.