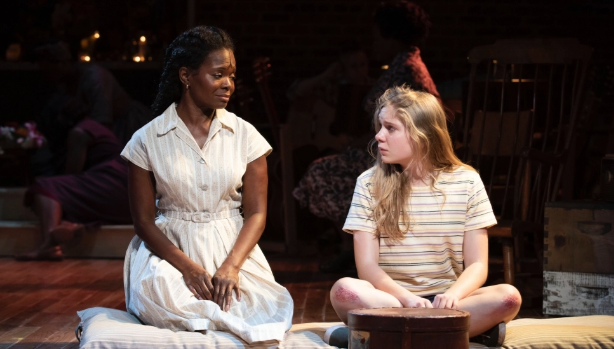 A BEELINE TO BROADWAY: Don’t look now, but the next Broadway season is already off and running. Bolstered by all but The Times’ review, Atlantic Theater Company is now shopping around for a suitable Main Stem home for its current Off-Broadway play-in-residence, The Secret Life of Bees. . . . ATC has a long history of uptown transfers stretching from The Beauty Queen of Leenane to The Band’s Visit, so it knows a hit when it has one. . . .This new hopeful hails from Sue Monk Kidd’s 2004 novel and Gina Prince-Bythewood’s 2008 film—both of which would likely have been overlooked as musical theater fodder, had not Pulitzer Prize-winning book-writer Lynn Nottage been on the case. . . . A coming-of-age story set in the early1960s when the South was riddled with civil-rights unrest, it concerns a white teenage girl (named Lily, no less!), who, fleeing an oppressively bad dad, finds shelter and security among a sisterhood of African-American beekeepers. There is, definitely, no shortage of conflict here! . . . Nottage’s creative collaborators are hardly strangers to Broadway: actress LaChanze, composer Duncan Sheik, lyricist Susan Birkenhead and director Sam Gold.

DRY-EYED WOLFE:  A Tony loser for 2019’s Best Director, George C. Wolfe isn’t wasting salty tears about having to bury Gary on Broadway. He’s on to The Next Thing: namely, Netflix-ing a long-delayed, much-anticipated movie version of Ma Rainey’s Black Bottom, the first of August Wilson’s ten-play cycle that chronicled a decade at a time the African-American experience in twentieth century America. . . . Set in a Chicago recording studio in 1927, it’s the only opus not set on his home turf-–the Hill District of Pittsburgh—but filming will begin there all the same next month. . . . Viola Davis, who has proven her Wilson worth twice—winning a Best Actress Tony first, and then a Best Supporting Actress Oscar, for his Fences—will play the Bessie Smith-inspired Ma Rainey. . . . Her leading man in both Fences, Denzel Washington, will sit this one out and play producer. . . . Wolfe’s next back-to-back Black project is a Broadway musical version of Black Orpheus, France’s winning entry for 1959’s Best Foreign Language Film. Basically, this amounts to a reunion of the old Hadestown crew—Orpheus, Eurydice, Hermes, etc—plus a re-airing of the film’s hugely popular soundtrack. . . . Lyricist Birkenhead, who added verbal spice to Wolfe’s Jelly’s Last Jam, will supply English words to the Brazilian melodies of Antonio Carlos Jobin and Luiz Bonfa.

WHAT PRICE GARBAGE? While picking up her first Tony after 59 years at bat for The Waverly Gallery, 87-year-old Elaine May told the world how it happened–sorta.  In her view, Lucas Hedges (who played her grandson in the play)eulogized her character’s passing so eloquently “I thought this boy is going to win me a Tony.” Pshaw! . . . David Cromer, her son-in-law in that play, told a different story when he collected her Outer Critics Circle Award for Best Actress. According to his account, she and producer Scott Rudin, “live in the same apartment building. Elaine’s apartment does not have a garbage disposal, and Scott’s apartment does have a garbage disposal. The story goes that while Scott was casting The Waverly Gallery, Elaine ran into him near the elevators and said, ‘If you can get a garbage disposal installed in my apartment, I will do the show.’ In exchange for this appliance, Elaine returned to act on Broadway for the first time since 1961, in a blisteringly raw, truthful, savage, hilarious, heartbreaking performance. I got to act with her, and you all got to see it.” . . . Whatever it takes . . .

HAILING HAGEN’S 100TH: HB Studio spent the better part of this year celebrating the centenary of theatrical icon Uta Hagen, pointing up various aspects of her life and career in free-to-the-public seminars, before finally wrapping it all up with an elaborate auction-dinner at the elegant Tribeca Rooftop. Proceeds raised went to support all of the HB programs including scholarship for artists of all means and backgrounds at every stage of their career. . . . Hagen, who’d have hit 100 on June 1, spent three-quarters of her years teaching and mentoring generations of actors at the Greenwich Village acting school she founded with her husband, Herbert Berghof. . . . Several of their well-turned-out star-pupils turned out for the tribute: Debra Monk, Mark Blum, Laila Robins, Scott Ellis, Amanda Quaid, Victor Garber, Lonny Price, Helen Gallagher, Peter Francis James, Stephen Bogardus, Phil Donahue, et al. . . . Two Tony-winning HB grads—Katie Finneran and a bearded David Hyde Pierce—hosted the gala and gave out special awards in the acting factory’s name. . . . John David Washington—once known as Denzel’s boy, now known as BlacKkKlansman–was awarded the HB Next Generation Award, and the HB Community Leader Award went to Lenny’s only son, Alexander Bernstein. For her humanitarian work, Marlo Thomas received the Uta Hagen Legacy Award–from her longtime BFF, Elaine May, the one-day-old Tony winner, who said the garbage disposal was working just fine.

GARY AND LEAR GO BOWLING: “I don’t pay attention to the Tony Awards, but everyone in my show was nominated this year,” noted the unnominated Gary of Gary, Nathan Lane. “I’m so proud and happy for all of them, and it’s incredibly well-deserved. In other good news, [on Tony night], I’m be going bowling with Glenda Jackson. Turns out, she always travels with her special shoes and customized balls.” . . . The irony of this Tony snub is that Lane, already a three-time Tony winner, found himself sandbagged by Lifetime Achievement Awards. “There’s no way to sit through an extraordinary afternoon like this without, at some point, asking yourself the terrifying question, ‘When did I turn into Angela Lansbury?,’” he sighed at the New Dramatists salute. “It starts without warning like a virus–so slowly you’re not even aware of it—and then it dawns on you that more and more you’re being honored for Lifetime Achievement. The next thing you know you’re on the cover of AARP magazine and in a hot tub with Betty White.” . . . At one point, he became a bit verklempt from flashbacking over all of the wonderful talents that he had worked with. “I’ve gotten to do the thing I love with so many gifted artists—actors, writers, directors, designers, producers,” he said. “I’m a very lucky guy. I got to work with the very best, so, by honoring me, you also honor all of them.” Overcome, he paused a full ten seconds and then buttoned it all down: “I guess I’m having a moment of silence for my career. “