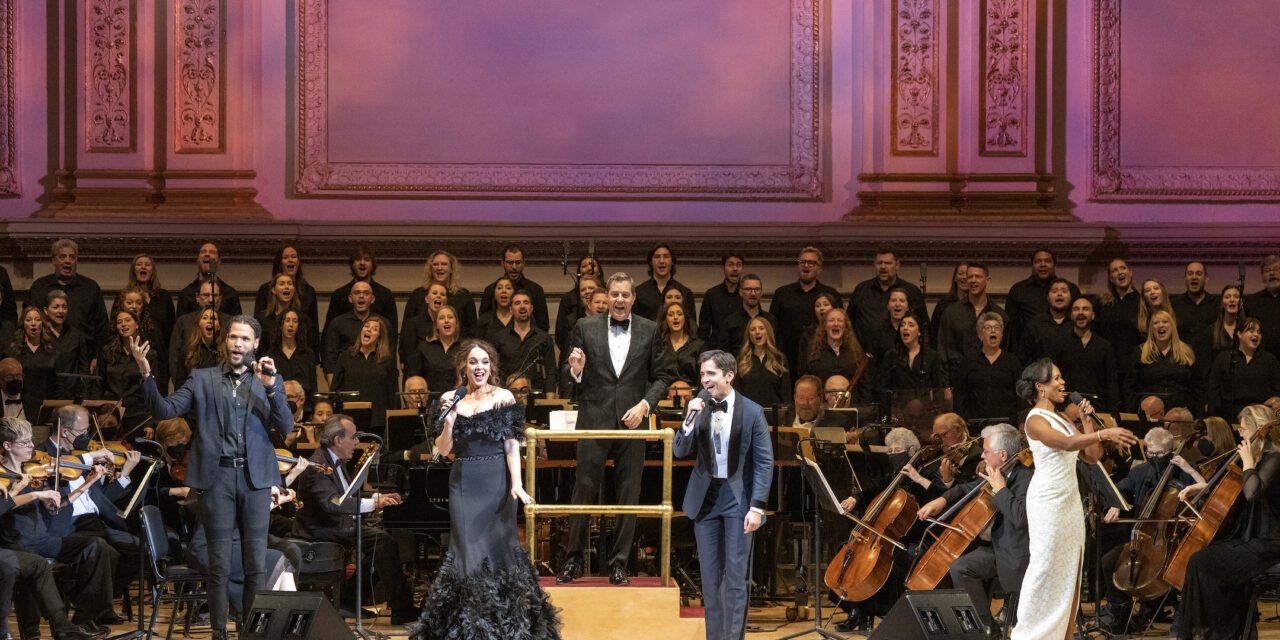 Carnegie Hall was the setting for a one-time-only event Friday night that Steven Reineke, conductor of the New York Pops dubbed “Broadway Blockbusters.” Featuring a quartet of solid theatrical talents (Melissa Errico, Nikki Renée Daniels, Matt Doyle and Jordan Donica), and backed by Judith Clurman’s Essential Voices USA, the orchestra performed selections from The Phantom of the Opera, The Wiz, Les Misérables, My Fair Lady, Oklahoma!, Follies, Man of La Mancha, and more. I didn’t count, but it appeared most of the 3,761 seats were occupied, which led to some thunderous applause after many of the songs. Excitement was in the air for a solid two hours of prime entertainment.

The Pops is a fabulous mainstay of New York City with a devoted following. Comprised of seventy-eight musicians, this is their 40th anniversary season. Currently under the leadership of Conductor Steven Reineke, the orchestra’s annual subscription series at Carnegie Hall was founded with the mission statement, “to create greater public awareness and appreciation of America’s rich musical heritage through the presentation of concerts and education programs of the highest quality.” And that they do. As a non-profit organization, it is also dedicated to serving all members of the community. Its free Kids in the Balcony program is just one of the ways it offers opportunities for thousands of children to be introduced to the joys of live musical performance.

Even with the wonderful singing throughout the evening, it really is the orchestra that took center stage (and how could they not, spread out as they are to cover the entire thing). Under Reineke’s baton, the acoustically perfect Carnegie Hall led to song after song treating the ear to orchestrations created by such masters of the art as Robert Russell Bennett (Richard Rodgers and Oscar Hammerstein’s title song from Oklahoma!), Philip J. Lang (Jerry Herman’s “It’s Today” from Mame), and Jonathan Tunick (Stephen Sondheim’s “Getting Married Today” from Company). The latter, performed by Matt Doyle who won a Tony last June for this rendition, hilariously and dramatically closed the first act.

The opening of the second act offered the Overture commonly referred to as the greatest ever written—Jule Styne’s Gypsy—in the original Robert Ginzler and Sid Ramin arrangement. It did not disappoint. Nor did the stirring rendition of the aforementioned “Oklahoma!,” a number that never fails to thrill me, and which gave Essential Voices USA the chance to shine bright.

Sondheim’s “Move On” from Sunday in the Park with George was sung to perfection by Melissa Errico and Matt Doyle, as was Jordan Donica’s “Soliloquy” from Rodgers and Hammerstein’s Carousel. He also sang a luxurious “Impossible Dream,” Mitch Leigh and Joe Darion’s anthem from Man of La Mancha. Donica—recently announced as Sir Lancelot in the upcoming Lincoln Center Theatre revival of Camelot—delivered the goods with style and panache. There’s no doubt whatsoever that he’s going to nail Lerner and Lowe’s “If Ever I Would Leave You” next Spring.

Nikki Renée Daniels proved especially winning, teaming with Donica for “All I Ask of You” from Phantom of the Opera and gracing us with solo turns of “I Dreamed a Dream” from Les Miserables, (a role she played on Broadway in its last revival), and Charlie Small’s “Home” from The Wiz, where she tore the house down. There’s something about the holding of that last note that always sends an audience into a state, and in this case there was no exception to that rule.

Doyle answered in glorious fashion two questions raised by “Who Can I Turn To?” from Leslie Bricusse and Anthony Newley’s The Roar of the Greasepaint—The Smell of the Crowd, and Claude-Michel Schoenberg and Alain Boublil’s “Why God, Why?” from Miss Saigon. And Melissa Errico enchantingly answered the question posed by My Fair Lady’s “Wouldn’t It Be Loverly?” But it was her “Losing My Mind” from Sondheim’s Follies that had a lasting effect, beautifully done, with an arrangement by Doug Besterman.

To close out the evening, two duets were performed: one by the men and one by the women. Lucy Simon and Marsha Norman’s “Lily’s Eyes” from The Secret Garden (gorgeous), and Henry Krieger and Bill Russell’s “I Will Never Leave You” from Side Show (moving). The finale was “Climb Every Mountain” and a rousing encore of “Do Re Mi” (it was a good night for Rodgers and Hammerstein).

It was also a very good night for aficionados of fine music, exemplified by the wit, elegance, drama and comedy of the Best of Broadway. Annual salutes like these are common to the New York Pops, to which I say, long may they reign.