Broadway by the Year: From the Ziegfeld Follies to Moulin Rouge! 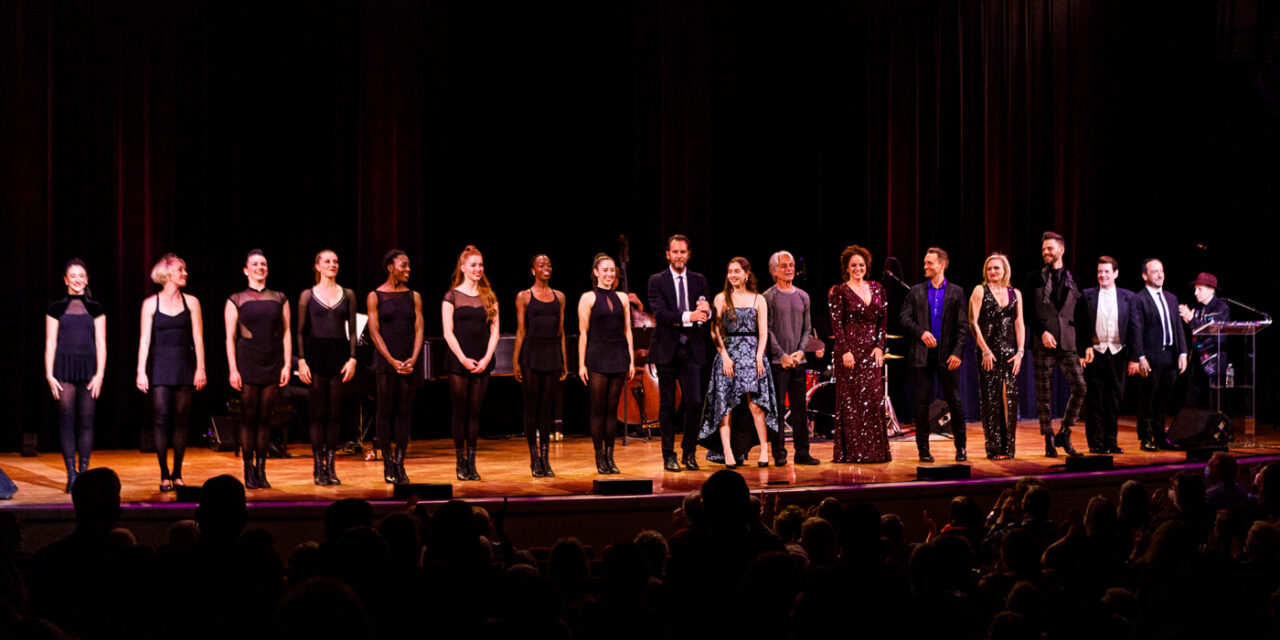 Celebrating its 21st anniversary season of Broadway by the Year®, Scott Siegel put together a great compilation for the Town Hall show on May 23rd. With the revival of Funny Girl reliving the era of the Ziegfeld Follies, four new actors taking over lead roles in Moulin Rouge, and jukebox musicals taking over the marquis, this musical revue was definitely “on theme” for the current Broadway season. Siegel has created over 400 concerts during his career and hosted the evening by filling the audience in on the background of the songs, shows, and performers.

Taking us from the 1920s to today with music and dancing were Tony Danza, John Easterlin, Melissa Errico, Danny Gardner, Ryan Knowles, Douglas Ladnier, Anais Reno, and Hayley Swindal. Opera star John Easterlin and the Broadway by the Year Dance Troupe started the show up by taking us back to the heyday of the Ziegfeld Follies with a “A Pretty Girl is Like Melody.” The Ziegfeld Follies were popular from 1907 to 1925. After taking a year off, they returned in 1927, but the stock market crash took a toll on the show, and other forms of entertainment such as the talk and variety shows like the Ed Sullivan Show took over. For his second song, later in the show, Easterlin took on the oldest number in the revue with Irving Berlin’s 1915 “The Girl on the Magazine Cover” from Stop! Look! Listen! which he sang the way it was sung back then—sans microphone.

Douglas Ladnier performed the first song from a jukebox musical with “Yesterday” from Beatlemania. The award-winning singer is known for performing 11 roles in the original Broadway production of Jekyll & Hyde. In the second act of Broadway by the Year, he sang “Both Sides Now” from Priscilla, Queen of the Desert, which was a jukebox musical comprised of songs by different artists. He had the honor of closing out the show with “Forever Young” from The Times They Are A-Changin’.

Tony Award Nominated songstress Melissa Errico came dressed for the occasion in a glittered floor length gown and feather boa. Her family immigrated to the United States from Italy during the “glory years of the revue, in 1918,” she said. She spoke of her family’s journey to New York and the bumps along the way, including a shipwreck in Boston and the sudden death of her great-grandfather. The family eventually found their way to New York and her Aunt Rose hit it big in the city, joining the cast of Show Boat and becoming a Ziegfeld girl in 1927. She pulled a newspaper clipping out of her bosom, donned cat-eye reading glasses, and read a clip about Rose. Summoning up her aunt, Errico performed “Life Upon the Wicked Stage” from Show Boat and “Confession: from The Band Wagon Revue.

Choreographer Danny Gardner, straight from Flying Over Sunset at Lincoln Center, put on his tapping shoes and grabbed a mic to sing and dance his way through two numbers. The first, “Dancing in the Dark” from the Band Wagon Revue, included a dance interlude with Kelly Sheehan. The beautiful movements, choreographed by Gardner, had the two mirroring each other’s moves and dancing and swirling around each other closely, yet never touching. “Fascinating Rhythm” from The Gershwin’s Fascinating Rhythm was a tapping sensation with Gardner joined on stage by the eight women in the Broadway by the Year Dance Troupe.

With a love for the American Songbook and jazz, 18-year-old Anaiïs Reno has already released a debut album which reached #6 on the jazz charts. Looking beautiful in a floor-length strapless blue and black gown, she surprised the audience with her soulful mature voice. She sang the title song from Stardust and “Caravan” from Duke Ellington’s Sophisticated Ladies. Her melodious humming and jazz stylings were perfectly suited to the piece.

Broadway star Ryan Knowles wowed the crowd with his stylish outfits and his deeply resonant voice. His “Brother, Can You Spare a Dime?” from Americana conveyed the mood at the time of the show, as America went through hard times. He shined, along with his jacket, in “Everything Old is New Again” (The Boy from Oz), and looked dapper in a black and white ensemble as he crooned “Sixteen Tons” from Million Dollar Quartet.

Haley Swindal (Chicago, Jekyll & Hyde) also looked stunning in three outfit changes for her songs. In Act I she beautifully performed “Losing My Mind” from Sondheim on Sondheim in a deep blue gown and sparkly cuff bracelets. Her first song in Act II was “Cabaret” from the show of the same name, and also heard in Hal Prince’s Prince of Broadway. A veteran of Chicago, Swindal has the music of Kander & Ebb and the choreography of Fosse flowing through her veins and performed the song with style, holding out the last notes of the lyrics “when I go…” for a shockingly long time. The penultimate number of the show was “Diamonds are a Girl’s Best Friend” (a song currently in Moulin Rouge) accompanied by the BBTY dance troop dangling strings of diamonds.

Star of stage and screen, Tony Danza glided across the stage showing off his now-silver hair and his still-boyish grin. Happy to be on stage, Danza talked about being a “Brooklyn Boy” and his love of New York City. He chose to sing two Frank Sinatra songs from the Frank Sinatra Tribute: “How About You?” and “Angel Eyes,” accompanied by Joe Davidian at the piano. “When I was on Taxi, and then Who’s the Boss?, I must admit, sometimes my head swelled a little bit.” he said. “My mom would bring me back down to earth. ‘When you introduce me to Sinatra, then you’re a star.’ she would say. Sinatra actually appeared on Who’s the Boss? I flew my mom across the country and introduced her to Sinatra!” Danza did a little tap dancing along with his songs to the delight of the audience. He will be performing at the famous Café Carlyle from June 14-25.

The show was created, written, directed, and hosted by Scott Siegel. Danny Gardner did all of the choreography in addition to performing. Ross Patterson served as Music Director for the 21st year in a row, and also accompanied the artists on piano. Adam Armstrong on bass and Eric Halvorson on drums rounded out the band. This year’s Broadway by the Year Dance Troupe consisted of Mary Donnelly, Courtney File, Kelty Ober, Alexis Payton, LaTarika Pierce, Jaclyn Salerno, Emma Schultz, and Kelly Sheehan.