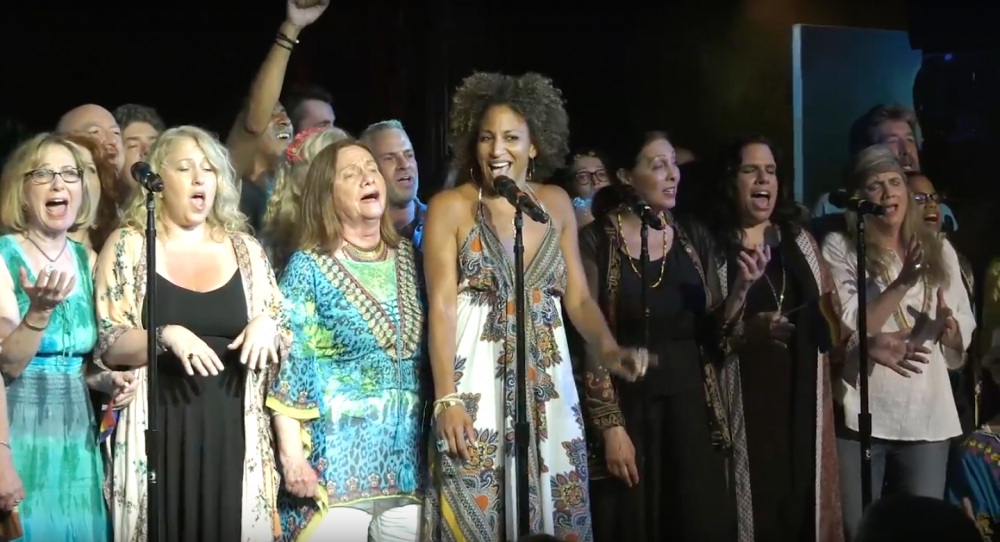 “It matters not who you love, where you love, why you love, or how you love… it only matters that you love” — John Lennon

The revolution was alive and blazing at the Cutting Room last Monday night, where the Broadway-centric benefit concert of the same name kicked off Pride week with a bang befitting of the occasion. Stars of stage, screen, sports, news media and more stepped out to offer songs, stories, and inspirational words in an effort to promote acceptance for all amid a period in our history that is not quite so accepting.

Now in its eighth consecutive year, the annual lovefest championing diversity and equality has always been a dynamic and enjoyable evening for performers and audience members alike, but again, this year, in light of current events, the celebration took on an even deeper meaning, with song lyrics standing out and resonating louder than ever.

Among the thoughtfully chosen selections, which ran the gamut from Broadway to pop rock, one particularly stunning quartet of musicians asked “Where is the Love?” courtesy of the Black Eyed Peas, while another group, headed by The Voice’s Dylan Hartigan offered up a relaxed acoustic spin on the R. Kelly classic, “Bump ’N’ Grind.” In response to the dark news of late, Sweeney Todd’s Matt Leisy fearfully wondered “Who Can I Turn To? (When Nobody Needs Me), while Jon Viktor Corpuz of The King and I revival, assured us that “over the rainbow” better days lie ahead. And in an effort to “raise us up,” a gaggle of drag artists, led by 10-year-old activist extraordinaire, Desmond is Amazing, delighted with the Kinky Boots hit, emphasizing that iconic, ever-important mantra: “you can change the world if you change your mind.” Meanwhile, non-Broadway talent moved the room with stories of strength, saluting the trailblazers that paved the way and praising the inclusivity of the Broadway community in particular. Of note, activist Shefik spoke candidly of the power of revolution and the people who enact it, Haley Videckis and Layana White, former Pepperdine University basketball champions who made headlines when they accused their school of discrimination based on sexual orientation, emphasized the importance of living one’s truth and embracing who you are, and Christian Navarro—currently appearing in 13 Reasons Why—stressed that while sexual orientation is indeed something to take pride in, it’s not the sole criteria on which the community should be defined.

The evening served to benefit the Tyler Clementi Foundation, named for the titular Rutgers University student who tragically took his own life as a result of online harassment, which aims to eradicate online bullying and overall humiliation. Citing the young performers in particular, executive director Jason Cianciotto explains the solution lies within us, praising parents for “creating a world where [kids] feel safe just being themselves” and encouraging everyone to lead with kindness above all. It all culminated in a Hair-raising finale, uniting casts from the original Broadway run, tours, and various regional productions of the tribal rock musical, itself notable for shaking up Broadway with its radical themes of youth empowerment and peaceful protest (themes, which, again, are just as prevalent now as they were then), who echoed the theme of the evening and  urged us all, despite trying times, to aptly, “Let the Sun Shine In.”

“It’s imperative,” says Sherwin Ross, Berger in the 20th anniversary touring production, adding that the fight for equality “has been going on for decades.” “We must continue to do the work,” he commands. “Especially in this community, which is so loving and giving and supportive. We must, must, must be the voice of reason.” “Some music simply never loses its relevance,” adds Dale Soules, a replacement Jeanie in Hair’s original Broadway company, pointing specifically to the poignancy of the tune’s message in this current wave of political uncertainty. “Now is the time. We’ve got to remember to keep the faith and choose love all the way.”

And fortunately, they weren’t the only ones promoting these ideas.

“We deserve to be treated equally,” headliner Frankie Grande, who wowed with a mash-up of perennial Pasek and Paul anthems, commented, speaking specifically in honor of LGBT outcasts. “The fact that it’s still not happening is mind-blowing.”

“The country is becoming more and more divided,” the aforementioned Leisy says, reiterating the themes he put forth in his number. “It’s a scary time, and unification is key.”

One surefire way to do that? Join—or start—a revolution. If this empowering evening, and the equally impassioned community that threw it, has taught us anything, it’s that you never know what could happen next… and what new movement, action, or overall awareness you could ignite.