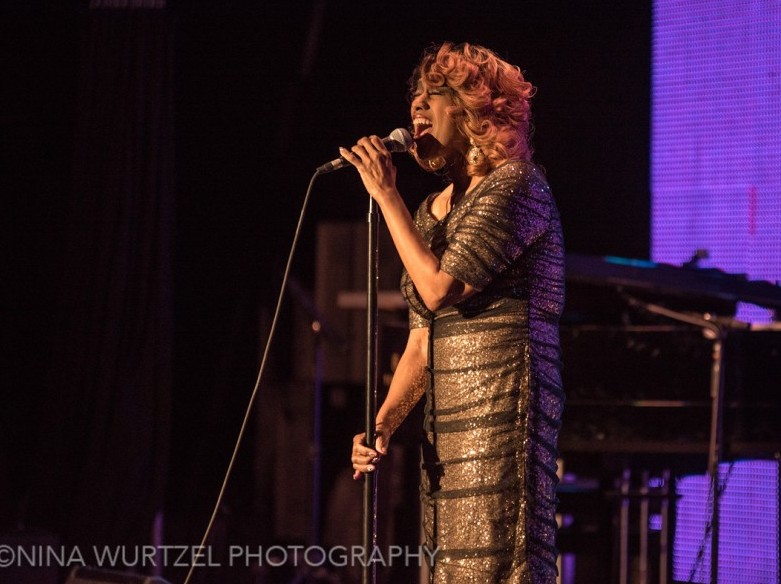 On Monday night, Julie James hosted a live version of her popular Sirius XM radio show, “Broadway Names” at the Out Hotel’s club space 42West on West 42nd Street. This one-night-only event, co-produced by Jacob Langfelder, was also a fundraiser for Arts for All, an organization that “offers accessible artistic opportunities to children in the New York City area who face socio-economic, physical, or emotional barriers to exploring the arts.” 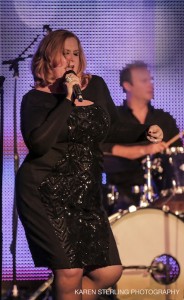 Headlined by Jennifer Holliday, the evening featured stories and interviews with a small but impressive line-up of stars, which, aside from Holliday, included Laura Benanti, Michael Cerveris, and Rema Webb.

Julie James, the ultimate musical theater fan-girl, has a vivacious personality, extensive knowledge of the musical theater canon, and some killer pipes, which she showcased a few times throughout the evening.

Her interviews with the performers were upbeat and enjoyable. Tony Winner Laura Benanti, a natural comedienne, was especially funny as she reminisced about dressing as Fosca from Passion for Halloween as a kid. She sang “Vanilla Ice Cream” from She Loves Me, whose revival she will be starring in this winter. Ms. Benanti has a gorgeous soprano and a ton of personality, perfect for the role of Amalia.

Two time Tony winner Michael Cerveris performed “Life on Mars” as a tribute to David Bowie, confessing that he used to imitate Bowie as a kid growing up on South Carolina. His voice perfectly captured Bowie’s unique tone, locating the yearning within the music and lyrics. Mr. Cerveris spoke with eloquence and humility about balancing his career as both a rock musician (he has a New Orleans based rock band) and a Broadway star. 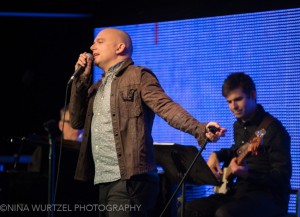 Rema Webb, who currently understudies Jennifer Hudson in The Color Purple on Broadway, and who wowed audiences as the church soloist in last season’s production of Violet, took us to church again last night. Her performances of “Let it Sing” from Violet and “Change” from A New Brain combined traditional Broadway and R&B sounds with marvelous skill. Ms. Webb spoke lovingly of her children – both her own and those that attend the performing arts conservatory that she founded and runs.

But the biggest story of the night was Tony winner Jennifer Holliday, who spoke and sang with boundless generosity and pure love. Conceding that she’s been reclusive for many years (she suffers from MS and has fought clinical depression), she announced that she is ready to come out of her shell, and boy, did she prove last night that she still has it. After a pitch perfect performance of Johnny Mercer’s “Blues in the Night,” she reflected on the time Ethel Merman came backstage after a Dreamgirls performance and compared her infamous moment in Gypsy with Ms. Holliday’s performance of “And I Am Telling You.” She sang Streisand’s “The Way He Makes Me Feel” with immense soul and shifted styles for a big band version of the Sinatra hit, “The Song is You.” Ms. Holliday finished (and, oh, what a finish) with two songs from Dreamgirls: “One Night Only,” and the legendary “And I Am Telling You.” Both performances were grand slams and drew thunderous applause. Ms. Holliday was in phenomenal voice – she sang with the same power and depth of emotion that made her a star more than thirty years ago. 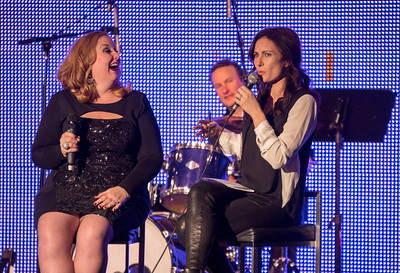