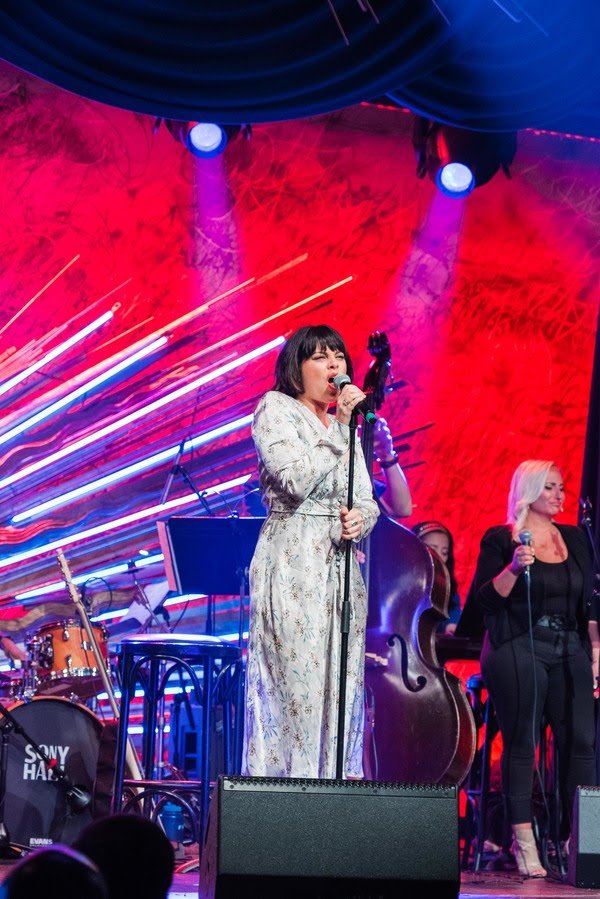 Such is the bold and ambitious promise that adorns the Broadway Sings flyer, and flashes against the projection screens as patrons pour in to witness the magic. For some, such a promise might be terrifyingly daunting, but this crew insists it’s just another motto to live by, and another routine monthly challenge just waiting to be conquered…. the fun way, of course.

Conceived in 2012 by Broadway performer Corey Mach, the dynamic and innovative series essentially “flips the script” on the catalogues of contemporary artists and revamping them with that singular Broadway twist. Aided by a sassy, brassy fourteen-piece orchestra — featuring all the essentials from flute to trumpets to piano to violin — original orchestrations from stalwart musical director Joshua Stephen Kartes, a healthy dosage of strobe lights and smoke, and the gorgeous, glitzy backdrop of the grandiose Sony Hall, the evening truly screams “Broadway Sings” in the fullest sense of the phrase. Spot the obligatory disco ball in the middle of the room and it solidifies what you probably already know going in: this ain’t your ordinary karaoke night. 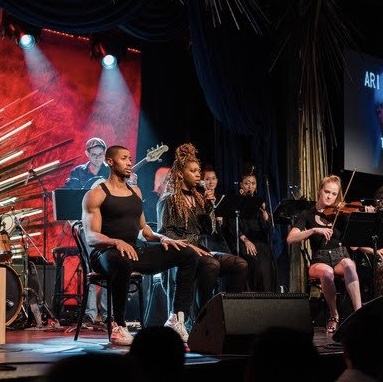 This go-around, the team is tasked with the music of pop sensation (and one-time Broadway actress) Ariana Grande. They succeed, of course, but in truth, their victory has little to do with Grande’s music in itself. Sure, the catalogue of the rising pop princess was inevitably a draw to some, who packed the venue to the brim, but what really made the evening pop for Broadway folk, especially in terms of creative thinking, was to see what these Main Stem masterminds did with the material, each thoughtfully and carefully manipulating the tunes to fit their specific voice and style.

In that sense, the focus of the evening is unique, as is the case with all Broadway Sings installments, in that, with no disrespect to the original artist, it uniquely champions creativity over final product, resulting in a casual atmosphere that takes the pressure off and allows all involved — performers and audience members alike — to relax and just enjoy the music for what it is.

Though, as evident by the fierce and fiery set list, the final products are all pretty kick-a** in their own right. Case in point: considering the theme of the evening, the most enjoyable of the revamps, perhaps unsurprisingly, were the ones that embraced that “traditional” Broadway sound. One being the incomparable Krysta Rodriguez, soon to be seen in Central Park’s Hercules, who wailed her way through a jazz-tinted, Sinatra-esque big-band rendition of “No Tears Left to Cry,” and Desi Oakley, late of the Waitress tour, whose smooth, bluesy direct address of the Grande fan favorite, “Problem,” deservedly sent chills through the room. 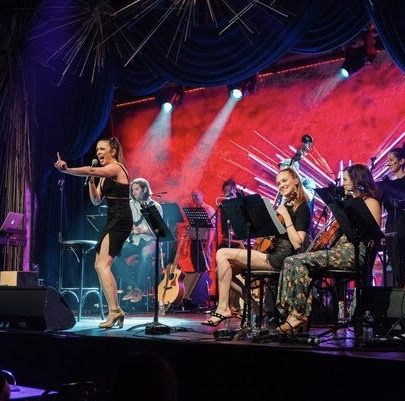 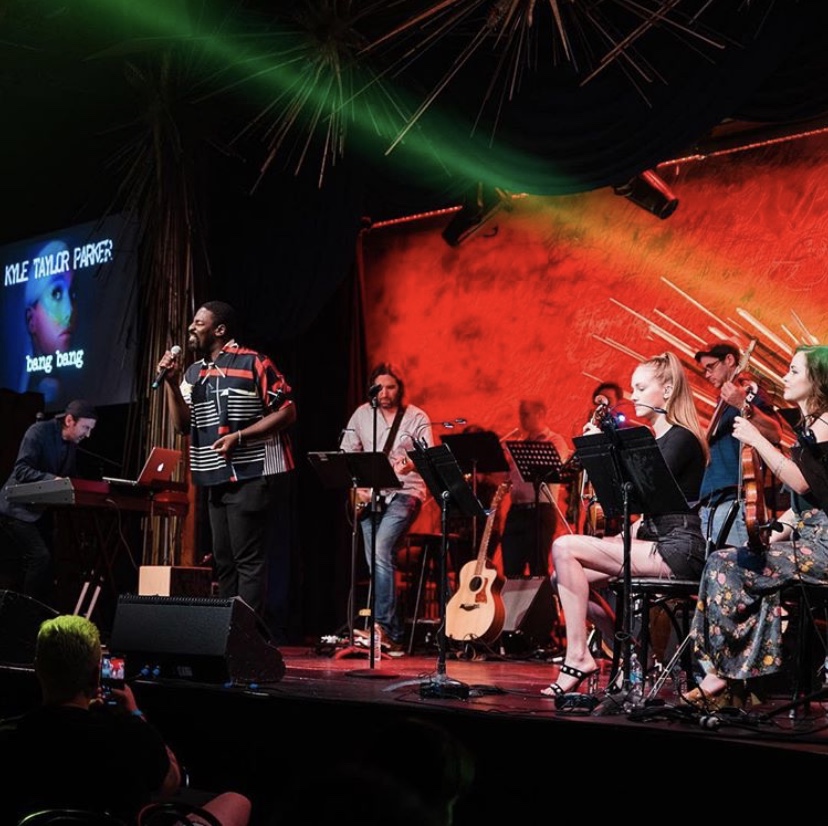 Other highlights included Kyle Taylor Parker’s explosive opener — a bold, brass-infused “Bang Bang,” originally written as a solo song for the woman of the hour — Mach’s “doo-wop” redux of the downtrodden “Almost Is Never Enough,” and, the song no Grande tribute can lately be without, Storm Lever’s spine-tingling “Thank U, Next.”

Meanwhile, Mauricio Martinez encouraged us to “break free” with his calypso-inspired take on the song of the same name, Ari Groover re-worked Grande’s steamy “Bad Idea” into an even steamier story-song, and Kartes himself even humored us with an abridged, instrumental “7 Rings,” whose melody, of note, is plucked from the Broadway classic, “My Favorite Things.”

It all led up to the climactic finale, delivered with finesse by frequent Broadway Sings clincher Ciara Renée, which declared “God is a Woman” by articulating the following lines: “I can be all the things you told me not to be / When you try to come for me, I keep on flourishing / And he see the universe when I’m the company / it’s all in me.” 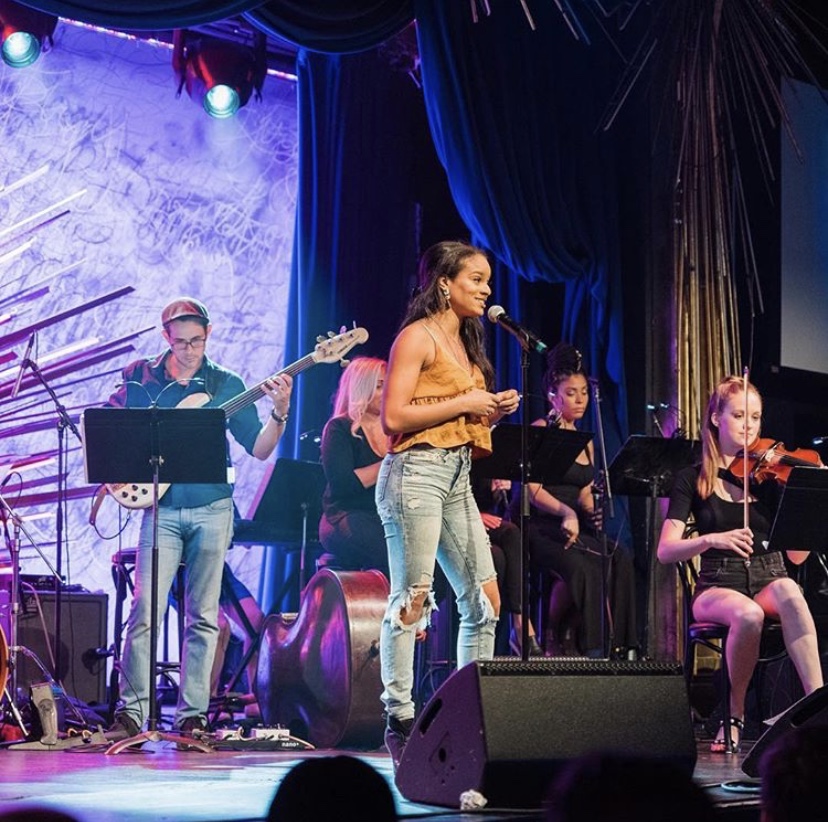 While acknowledging we’re taking liberties in stretching the exact specificity of the meaning of these lyrics, it’s clear that Grande proves these lyrics to be true across the span of her music and work at large — especially significant in terms of females and female empowerment — and, in their own way, so did each of the concert’s performers, showing their doubters they had the chops, both in creativity and straight-up vocal prowess.

Simply put, God may or may not be a woman, as Ariana’s song asserts, but there’s no question, as this evening proves, Grande is a musical god. And, in a manner of speaking, once you hear her music through the Mach-Broadway lens, you’ll soon be believing whatever she’s preaching.