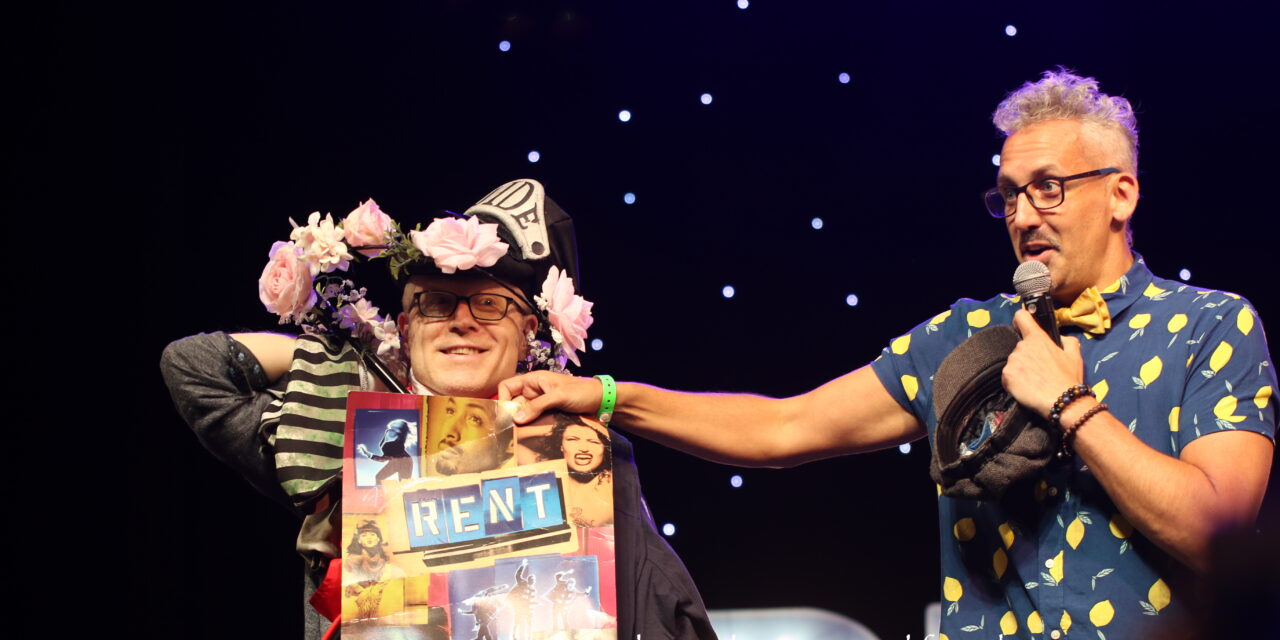 BroadwayCon 2022 was back in swing for its second day at The New Yorker Hotel and the Manhattan Center with main stage programming, small group and workshop offerings, and a shopping marketplace full of Broadway goodies. Some of the attendees dressed as their favorite Broadway characters. Beetlejuice seemed to be the favorite Cosplay choice this year.

Andrea Ambam from Level Forward moderated a panel of four of the stars from POTUS: Or Behind Every Great Dumbass are Seven Women Trying to Keep Him Alive. Lea DeLaria, Suzy Nakamura, Julianne Hough, and Rachel Dratch gave audience members some insight into the history of how they got involved in the show, what they like most about it, and how the audience reaction has been. One thing they all agreed upon was that it was wonderful working in an all-female environment where everyone was supportive of each other. Dratch explained that from the time of her first reading to the actual show, the political climate had changed significantly in the country, and feels this is reflected in the audience reaction. Most of the women were rebuffed at first by the title, not wanting to be in a political piece, but were drawn in immediately by the script and found themselves laughing from page one. DeLaria, who spent most of the panel making irreverent and funny comments about herself and the show, ended up being brought to tears at the end when she said that being part of POTUS was a life-changing experience for her.

The 6th Annual Star to Be competition, hosted by Ben Cameron, brought together 12 young contestants who were selected in advance from audition tapes. There were ten in-person performances which included one duet of sisters and one dancer, and one screen viewing from a young woman from India who was not able to travel to New York. The contestants were Katherine Lynn-Rose, Adah Christian, Natalie Wiley, Hannah Lauren Wilson, Sarah Zampella, Erica Faye S. Tubera, Olivia Hellman, Michael J. Coppola, Jazailis Gual, Nejalis Gual, Emma Valentine, and Kelly Dlima. In addition, last year’s winner, Tory Vagasy, who won during the virtual BroadwayCon in 2021, was invited to sing in person this year. Judges Fredi Walker-Browne, Frankie Grande, and Tara Rubin selected Hannah Lauren Wilson as the champion, with Adah Christian and Natalie Wiley as runner-ups.

Four talented actresses who have played a princess on Broadway presented Behind the Magic with Disney Princess—the Concert. Susan Egan, Anneliese van der Pol, Isabelle McCalla, and Syndee Winters ended with the popular “Let it Go” from Frozen. Kimberly Akimbo choreographer Danny Medford moderated a panel with four stars of the critically acclaimed Off-Broadway show that will be transitioning to Broadway this fall. Bonnie Milligan, Olivia Elease Hardy, Michael Iskander, and Nina White are excited for the opening when the latter three will be making their Broadway debuts. The show takes place in the early 1990s, before many of them were born, so they found it interesting to learn a bit about what life was like for teenagers before cell phones. The three newbies talked a lot about the nervousness and excitement of landing your first big acting role and all that comes with it.

The evening ended with a Cabaret Show with some very special guests. Fredi Walker-Brown, best known for originating the role of Joanne in Rent, delighted the audience with three songs, including some original music. The Boy Band Project, made up of Broadway actors, got the crowd pumped dancing and singing to favorite songs of the big Boy Bands of the ‘80s and ‘90s. Anthony Rapp, OBC Mark in Rent, is one of the founders of BroadwayCon along with Melissa Anelli and usually a big part of the conference. Since he had a limited time to be here this year, host Ben Cameron ran him through “a day at BroadwayCon” by putting him through his paces on stage. First Rapp performed a song from Hedwig and the Angry Inch, then he participated in an interview by Cameron in which he had to answer questions about his likes and dislikes. Cameron pulled a guest from the audience to do a quick game show with Rapp, and then invited cosplay attendees to run up to the stage and hand Rapp assorted props and costume pieces so he could participate in the tradition of dressing up for the convention. Cameron is the perfect host for BroadwayCon as he has a vast knowledge of Broadway along with show experience and has such an ease of talking with stars and guests, bringing out the best of them and adding impromptu humor along the way. Stay tuned tomorrow for day three coverage.