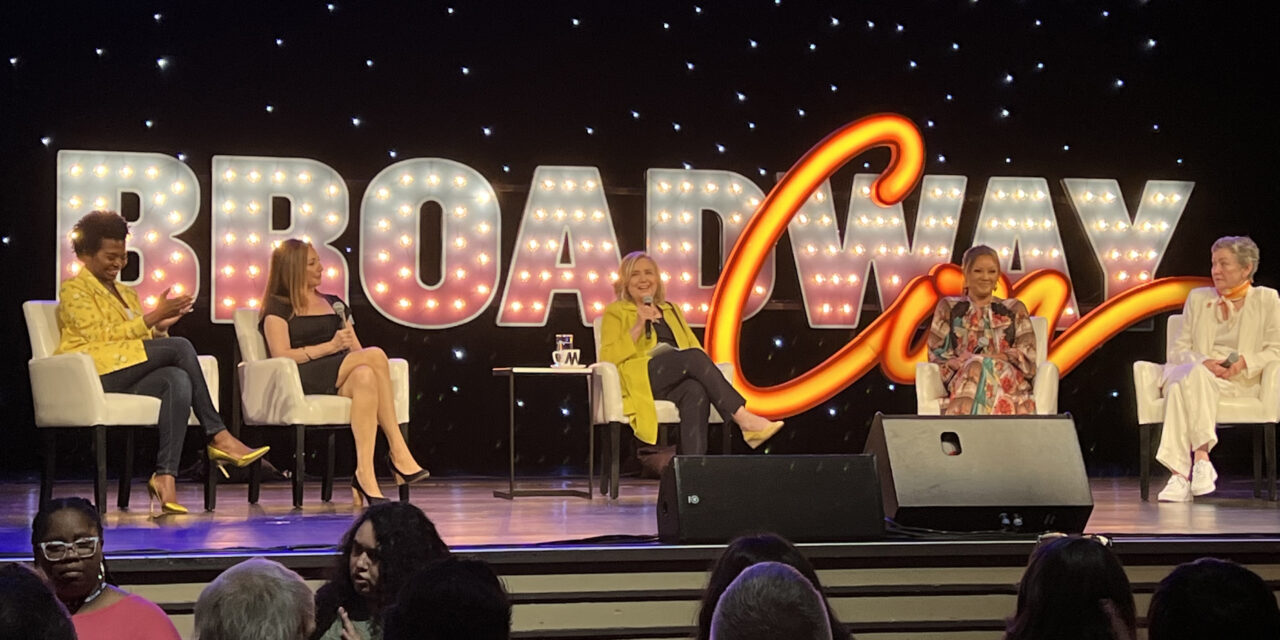 After a two-year hiatus, BroadwayCon is back with an in-person convention. The three-day Broadway lovefest was rescheduled from its usual winter gathering to July 8-11 at a new venue: The New Yorker Hotel and adjacent Manhattan Center. Ben Cameron is back at his hosting duties, a job he does really well. The kickoff included a musical number about Broadway, a chat with Tony Winner Joaquina Kalukango, and a song and dance from Jared Grimes.

Secretary Hillary Rodham Clinton made a special appearance this year and moderated a panel called “Here’s to the Ladies.” Clinton is a huge Broadway fan and sat down with leading ladies to discuss women on Broadway including Vanessa Williams, Julie White, LaChanze, and Donna Murphy. The women discussed how they would like to see changes in the industry to have more women at the helm writing, directing, and producing shows. All of the women discussed working in theater, raising children, losing spouses, and all the challenges of life. LaChanze is working hard to bring more diversity to the stage and is supporting projects that will enable more persons of color to get their foot in the door. Donna Murphy spoke at length about the impact Stephen Sondheim had on her life. Vanessa Williams and Julie White are both starring in POTUS, about a President’s wife and white house staff. Considering Hillary Clinton was moderating the panel, this brought some humor into the session.

A First Look showcase gave the audience insight into some shows that just started their Broadway runs or are slated to open soon. Kimberly Akimbo will be moving to Broadway after a successful Off-Broadway run, this time with LaChanze as a first-time producer. Kinky Boots is making a return and will be at Stage 42. Between the Lines is finally off Broadway after a long pandemic delay. Paulo Szot and Betsy Wolfe are bringing West End hit & Juliet to New York. Shoshana Bean sang a song from Mr. Saturday Night, which has been open for a few months  but by the whoops of the audience, they were very glad to have her included in the First Look.

Death of a Salesman will be making a return to Broadway this fall with Wendall Pierce and André de Shields. The show originated in 1949, but André says that many of the themes are still relevant today and a lot can be learned from the play. His advice is to “avoid the extremes, aim for the means, concentrate on balance in your life, and join a sacred community of a church, a temple, or a theater.” Jared Grimes moderated a panel of the two stars playing the Loman brothers in the show.

The cast of A Strange Loop, along with some of the creative gathered on stage to discuss their many accolades, including The Pulitzer Prize and the Tony Award, the genius of Michael R. Jackson, and their joy and gratitude at being part of an all-Black cast that celebrates the Queer experience. Questions about the show from audience members were answered including how the show changed from off-Broadway to Broadway (better costumes!) and what each cast member liked best about being in the show.