Broadway’s Next Hit Musical is Very Much That, Thanks to Truly Talented Improvisors & Lively Emcee 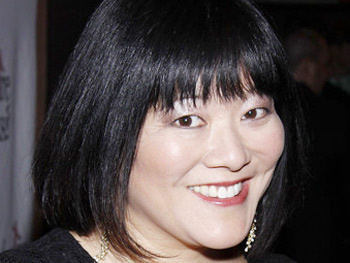 As you walk into Stage 72 at the Triad Theatre to attend Broadway’s Next Hit Musical’s Phony Awards ceremony, you hear the jazzy sound of trumpets blaring in the background. You may notice special guest Ann Harada (Avenue Q, Smash) seated on the opposite couch, sipping her drink and likely going over her set. As you look at the stage, you take note of a piano, positioned at the left, and a single mic stand at center stage. The lights dim, musical director Gary Adler (Avenue Q and Next to Normal fame) takes his seat at the piano. Observing all this, one can presumably guess what you’re in for. And yet, the moment emcee Greg Triggs bursts onto the stage and shouts, “The world is going to hell and there’s only one thing that can save it: musical theatre!,” you realize the evening’s going in a completely different direction  — and you’re all the better for it!

“We have five of New York City’s finest improvisors ready to perform for you, and four of them are very talented,” Triggs laughs, before giving way to the cast. The performers then proceed to present the four (faux) “Phony Award-nominated Best Songs” by pulling never-before-seen song titles from a fishbowl (all generated by the audience prior to the performance) and pairing them with the title of an equally ridiculous musical, in which they’ll say the song is featured. And then, of course, they perform the improvised number in full.

Once the four songs are completed, an audience vote is held — and the winning choice (and its musical) is then expanded in a full-fledged live show and presented in its entirety, full-out, on the spot, right before our eyes.

It’s a pretty fantastic concept for a show, and while seemingly tough on the performers — who must not only rattle off their own lyrics on the spot for each song, but make up a completely new show each time they perform — they’re clearly seasoned professionals, and waste no time in assuring us they’re up for the challenge.

Highlights of the June 2 performance include Megan Reilly, whose gorgeous voice fits her impromptu power ballad like a glove — a feat made all the more impressive considering neither she nor Adler knew what she was gonna get — and Rob Schiffmann, who ups the ante in his Donald Trump anthem by pulling another title out of the bowl, and employing it as a lyric within his song. (The lyric — “I just came from a funeral at Riverside Chapel” is completely out of place in a Trump-centric musical, but again, Schiffmann inserts it effortlessly).

Meanwhile, Deb Rabbai brilliantly utilizes an audience member, whom she deemed her musical’s choreographer, when presenting her Justin Bieber-inspired number. When said patron (who’d had a few) falls upon standing up, Rabbai runs with it, calling it a signature dance move within the piece. (Of course, this then gives her and her scene partner free rein to spontaneously drop to their knees throughout the number — whether appropriate or not — which is met with thunderous applause!)

We can’t forget Katie Hammond and Matt Giroveanu, who, in the hit song, “I Only Have One Hand” from their swashbuckling pirate musical, Before There Was Hook, utilize wordplay with aplomb.

(Some favorites include the description of the musical’s themes: “love, treasure and [other] things beyond our reach,” and a line in its presentation: “Come on, Hook. Get a grip!”)

Equally compelling is Triggs, who not only offers a topical monologue — which touches on out-of-towners being American in a foreign country, and the presidential election — but commentary following each of the performances, in which he takes friendly jabs at several of the performers and their choices within their respective scenes. (“It’s [called] a wheel, Rob!” he quips, when Schiffmann stumbles with remembering what steers a ship. “Like the one in your freaking car. It’s not that hard!”)

Kudos to Adler as well, for creating instrumentation for a variety of styles — from soft-shoe to power ballad to pop/rock anthem to big Broadway finale — at the drop of a hat. It truly felt as if it was planned all along — seamlessly!

And, of course, I’d be remiss not to mention Broadway’s Ann Harada (Avenue Q, Smash), who, despite “never having won an award myself,” delivers a flawless performance in between the evening’s two acts.

But all in all, a truly enjoyable evening. I mean, a musical completely improvised on the spot by the most talented — Triggs wasn’t kidding — NYC improvisors, interspersed with an appearance and song from one of Broadway’s top musical comediennes? Count me in! Run, don’t walk to Broadway’s Next Hit Musical. You never know… the next hit musical could be written by YOU!

Broadway’s Next Hit Musical will be performed on consecutive Thursdays throughout the month of June on Stage 72 at the Triad Theatre on 158 W. 72 Street. For more information, visit www.broadwaysnexthitmusical.com, or www.triadnyc.com.