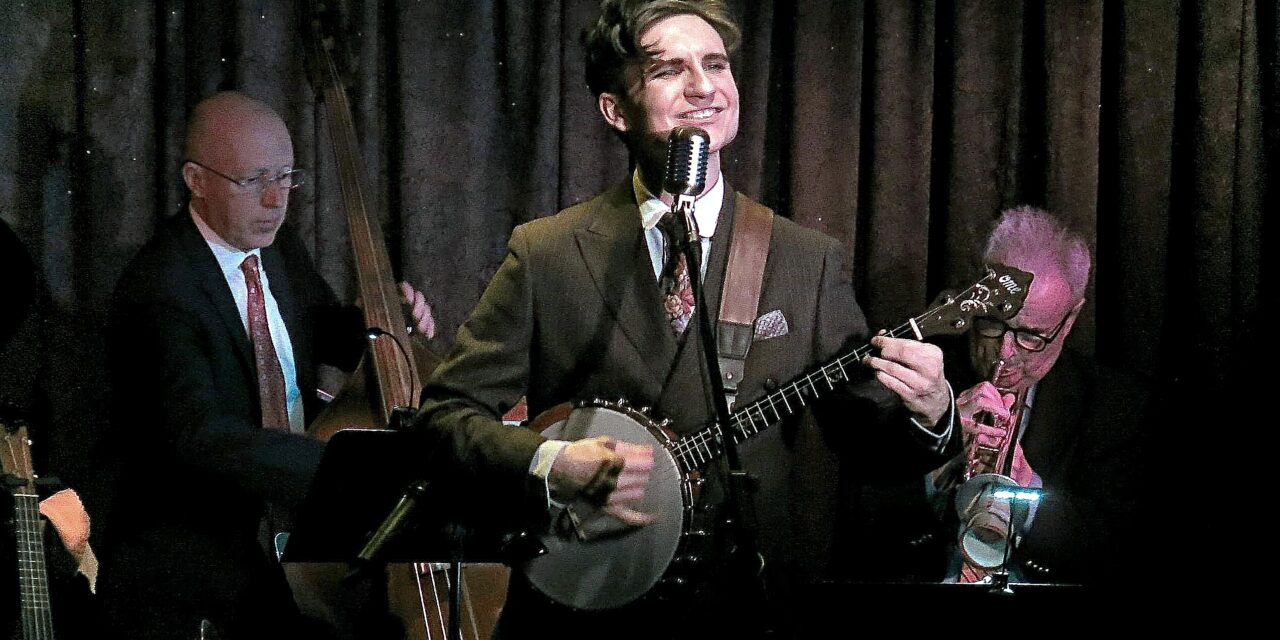 Throwback entertainer Bryce Edwards arrived by some sort of time machine from the 1920s for his triumphant, sold-out solo debut at Don’t Tell Mama on January 21st.  Entertainment royalty were in the house, including Marilyn Maye, Nicolas King, Jim Caruso and Susie Mosher.  Every possible seat was filled, and disappointed fans were turned away.  The harried staff was overwhelmed. All this resulted in a 40-minute delay, but the wait was worth it.

Bryce Edwards first came to my attention when he and lifelong pal Quintin Harris performed their Mr. Harris and Mr. Edwards show at Don’t Tell Mama in 2021 (review HERE).  I was enthralled, as is pretty much anyone who has seen them.  I’ve seen that show twice, and helped them get booked into The Lineup with Susie Mosher.  (Full disclosure: the “boys” invited me to do a musical comedy guest bit with them at their last show.)

The charming and earnest Bryce, only 22, is an enormously appealing sui generis entertainer. He is the embodiment of some of the greatest entertainers of long ago, particularly Al Jolson to and Ted Lewis.  (Lewis was especially adept at combining jazz, comedy, and nostalgia; Bryce has certainly taken up this mantle.) He is a virtuoso ukulele, banjo, mandolin and tenor guitar player. Bryce is a walking, talking and singing encyclopedia of Tin Pan Alley/Jazz Age songs and musicians from the early twentieth century. He owns an impressive collection of musical accoutrements, including antique kazoos and Bob Burns bazookas. He sang into a 1920s microphone. In this regard, Bryce is almost slavishly devoted to authenticity in bringing these songs to life.  While he may ham it up a bit at times, especially with that (with that Jolson-like “aww!” to end some phrases), it’s not a put-on; he lives it.

Bryce took the stage nattily dressed in vintage attire.  His shock of hair fell over his eye in a spit curl. Two excellent musicians, bassist/pianist Conal Fowkes and cornetist Scott Ricketts, backed Bryce, along with his own accompaniment. His impish grin and his voice were something out of a 1920s dream. Sopranino ukulele in hand, he performed a snippet of a 1929 Rudy Vallée song (“My Time is Your Time”) before launching into the 1925 hit “Dinah.” Here, Bryce introduced a vocal technique called “eefing,” an early form of jazz scat singing Bryce credits to Cliff “Ukulele Ike” Edwards. (Edwards was the voice of Jiminy Cricket in Pinnochio). “Eefing” sounds something like a cross between yodeling and a wild falsetto.

Bryce switched to banjo for “Home,” most associated with Louis Armstrong and Rudy Vallée, but which modern audiences may know from the horror film The Shining.  “This may come out of left field, but I worry about Shelley Duvall on a daily basis,” he quipped to much laughter.

The star pulled out a wild-looking “Songophone” kazoo for “Everybody Loves My Baby,” stating, “My word on musical instruments is I won’t play anything they let you bring on an airplane.” He “kazooed” quite a solo while simultaneously playing banjo.

Bryce’s showmanship was in top form during his rendition of a 1925 song, “Everything is Hotsy-Totsy Now,” which sounded like a lost song by Michigan J. Frog. Here, he “shredded” on the uke and played it behind his head, like Jimmy Hendrix would do on his Stratocaster some 65 years later. For the 1926 “If I could Be with You One Hour Tonight,” Bryce demonstrated an extremely rare instrument, a Stroh ukulele, which has a Gramophone-like horn attached.  Scott Ricketts sizzled in his cornet solo, and Bryce once again “eefed.”

In an especially touching segment, the star invited featured vocalist Reilly Wilmit (his “special lady”) to the stage for a pair of duets.  They sat together for the first tune, “Two Sleepy People,” (Hoagy Carmichael/Frank Loesser), for which Bryce played tenor guitar.  The couple charmingly traded chaste cheek kisses during the muted-cornet solo.  Though she sings in a modern style, Reilly has a sweet voice and demeanor, and her presence was a delightful change of pace.  Bryce switched to mandolin for the second duet, “Shine on Harvest Moon.” The couple’s voices blended in marvelous harmonies, and Conal Fowkes provided some swell stride piano. One could imagine seeing this on the big screen with a bouncing ball for an audience singalong.

In showbiz tradition, Bryce generously acknowledged the presence of legendary performer Marilyn Maye. Ms. Maye will perform with the New York Pops at Carnegie Hall on March 24.  “I don’t ask for much from my public,” he announced with a well-timed pause. He added, “We’re all going… and then convening for breakfast the next morning.”  Andy Kaufman lives!

After a magnificant early jazz standard “Saint James Infirmary Blues” and the obscure but wonderful “Sighing” (Leroy Stover, 1915), Bryce finished his killer set with the Jolson song “Avalon.” The rapturous crowd wanted more! Bryce came back for an unplanned encore of “Has Anybody Seen My Gal.”

Bryce Edwards is adorable, funny as hell, a terrific and dynamic performer. His first solo show is remarkably well-crafted and executed. Bryce managed to educate his audience and bring them into his world while being insanely entertaining. He uses his expressive, big blue eyes to every advantage, like a silent film star. Let’s be clear:  this kid is going places.  We can’t wait to see what he does next.

Photos: Neal Siegal except where indicated