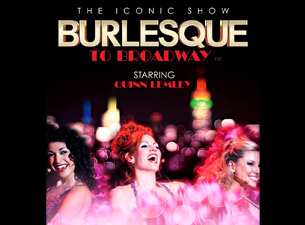 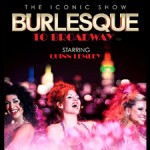 Live Nation presents the high-octane theatrical concert,  “Burlesque to Broadway” starring Quinn Lemley, for four nights in February at the Gramercy Theatre, 127 East 23rd Street.  This lightning-in-a-bottle survey of American burlesque — with Lemley leading a tight-knit coterie of showgirls through heart-racing choreography, in eye-popping costumes — is supported by a razor-sharp live band under the music direction of Dan Micciche.  Performances are Wednesday through Saturday February 5, 6, 7, 8, all at 8pm.The highly revealing celebration of American burlesque from a century ago to now features the choreography of David Eggers (“Nice Work if You Can Get It,” “Anything Goes”) and Merete Muenter, and the costumes of Wendall Goings (“Rock of Ages”).  Bette Midler collaborator Steve Rawlings provides the orchestrations.  The show’s directing consultant is the esteemed Tony Award-winning director Joe Hardy (Tony for “Child’s Play,” Best Direction Drama Desk Award for “You’re a Good Man Charlie Brown”).

The Wall Street Journal’s Will Friedwald, in assessing the show’s soon-to-be-released studio recording, exults that Lemley “has made burlesque better than it ever was.  Lemley brings to burlesque something it rarely if ever had before: great songs and first-class singing.”  In fact he adds, “She has now made burlesque into a medium that is as enjoyable on an audible level as much as a visual one. (…) This album is itself a kind of milestone!”

But seeing is believing!  Lemley and her cast, gracefully fan through 19 songs and numbers, all of which touch on the art, deception and humor of striptease seduction.  In everything from such classics as “Let Me Entertain You,” “My Heart Belongs to Daddy,” and “Ten Cents a Dance,” to songs of empowerment like “You Don’t Own Me,” and “When You’ve Got it, Flaunt It,” Lemley doesn’t shrink from revealing the tactical calculus of the battle of the sexes.From its vintage beginnings a century ago, to its embrace by the American musical, to its current neo-burlesque revival, Burlesque has never faded from the American entertainment landscape.  Lemley shows why.

“Burlesque to Broadway” offers something for everyone, with tickets tantalizingly priced from $30 to $49, and VIP packages stacked with goodies for either $69 or $159.50. For tickets visit www.ticketmaster.com or www.burlesquetobroadway.com