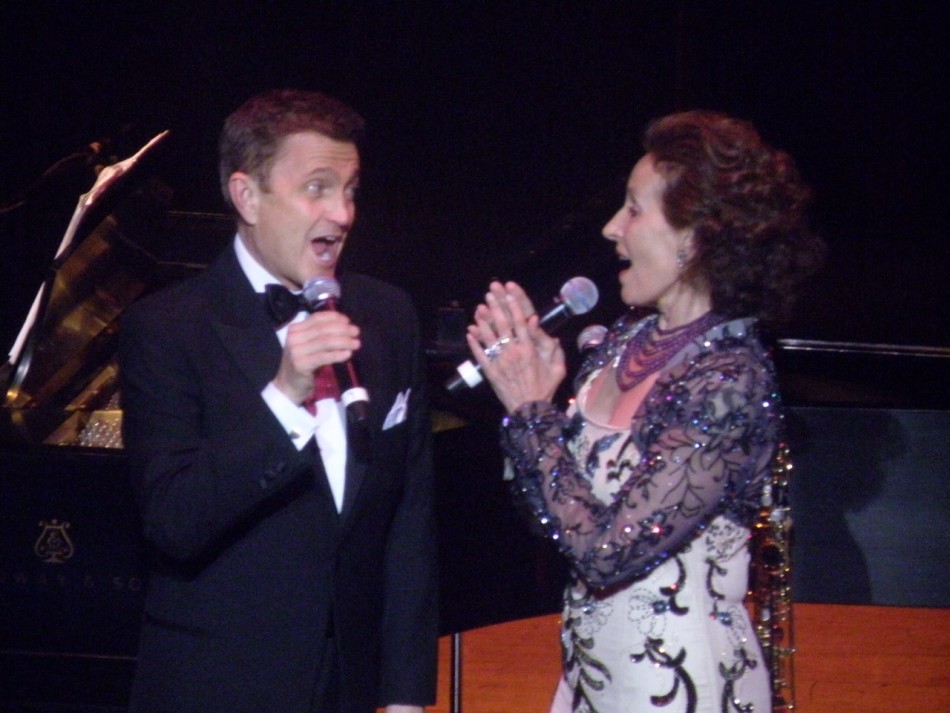 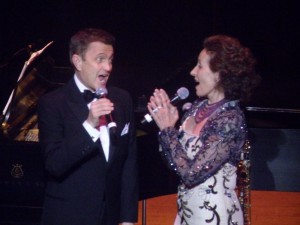 The second night of the Mabel Mercer Cabaret Convention was entitled “Sentimental Journey: World War II Songs” and was hosted by Andrea Marcovicci and Jeff Harnar. Among the performers were Eric Comstock and Barbara Fasano, Celia Berk, Todd Murray, Iris Williams, Karen Akers, Carole J. Bufford, Josephine Sanges, Natalie Douglas, Nicolas King, Jennifer Sheehan, Karen Kohler and Sean Harkness and Marissa Mulder. Almost every performer gave an introduction on the history of the songs and how they related to the optimism of the United States home front.

The show began with Marcovicci and Harnar doing a fun duet of “I’ve Heard That Song Before” and “Sentimental Journey.” The first thrilling performance was that of married couple Comstock and Fasano, doing a lovely duet of “I Thought About You” and “But Beautiful,” with great piano breaks by Comstock. Then Fasano, with new longer shoulder length hair, did a very sexy slow “Surrey With The Fringe On Top,” moving around the stage and targeting men in the audience. 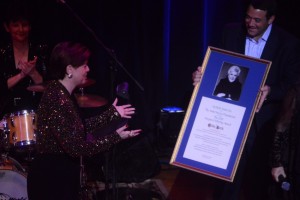 Next up was the extraordinary mezzo soprano Berk with Alex Rybeck on piano, with a full version (with every lyric and great acting skill) of the Bette Davis number “They’re Either Too Young Or Too Old.” She was then surprised to be presented by Debbi Whiting Busch with the Margaret Whiting award and the cash included with the award. After, Berk sang a wonderful “I’ll Walk Alone” effortlessly hitting great high notes.

Murray, glowing from his rave review of his show “Croon” at the Metropolitan Room that morning in The NY Times, described how recently he was in Rockwell, New Mexico and was able to pay to ride on a B-15 that was actually flown during World War II. He described the close quarters and that Murray, being so tall, had to be crunched at the radio transmitter. It made great sense for him to sing a World War II song introduced by Alice Faye, “You’ll Never Know,” with John Walsh on the trumpet. It was magnificent with breathtaking high notes.

Williams, with Art Weiss on piano, came out in a sleek blue gown, sang a slow and moving “The Last Time I Saw Paris.” As she sang, her gestures were poetic in nature, as she moved gracefully from one end of the stage to the other. Williams, the Welsh contralto, will appear at Birdland on Monday, October 19th, and should not be missed. 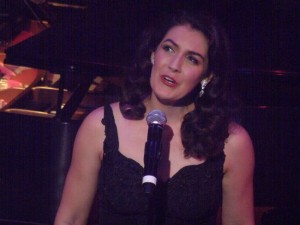 Akers, the other contralto on the program, came out and delivered an poignant, all in French International hit “J’Attendrai” and proved that you don’t have to know the language to understand the longing in that song. 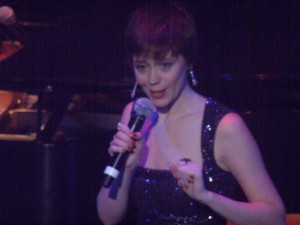 Bufford, with Ian Herman on piano, gave a fully acted performance of “Someday (You’ll Want Me To Want You” and a wildly sexy “Something For The Boys.” Sanges opened the second act with the Vera Lynn hit “We’ll Meet Again,” hitting all those high notes.

Harnar was surprised when Rick Meadows and Sullivan presented him with the Donald F. Smith Award. They mentioned that when Smith was sick at home Harnar visited him daily. 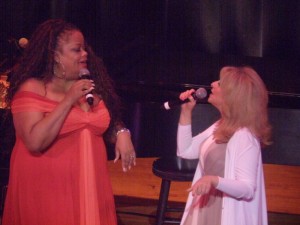 Douglas told us about Kim Gannon writing a holiday song for Crosby that Decca did not want. Gannon, playing golf with Crosby the next day, sang the lyrics and Crosby recorded it and it became one of his biggest hits. Douglas movingly sang “I’ll Be Home For Christmas.” King stated the immortal song from the forties is “Nightingale Sang In Berkely Square” and sang it tenderly. Sheehan, with James Followell, did two Rita Hayworth songs “I’m Old Fashioned” and “Long Ago and Far Away,” and surprised us with actually dancing like Hayworth did with Astaire and Kelly. 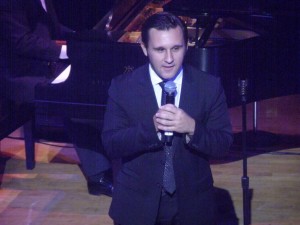 The penultimate performer was Kohler with Harness. Standing very erect with leather gloves, she told the history of “Lili Marlene” and related how her father and mother in a bunker in Berlin serenaded the children in the bunker with the song. Then she revealed that the lyricist wrote new lyrics during the Gulf War and she sang those, which were as pertinent today as they were then, with great emphasis on “how much more suffering will there be? Until the madness we will see…now, before the darkness turns once more, let’s bring an end to hate and war, Today, Lili Marlene, today, Lili Marlene.” 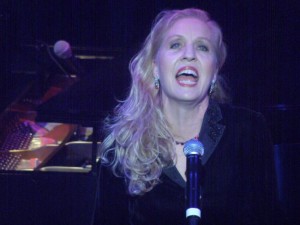 Marcovicci, in great voice, sang all the lyrics to “These Foolish Things.” Mulder, with Jon Weber, did a heart-breaking “I’ll Be Seeing You,” and then led the entire company in “It’s Been A Long Long Time,” with audience singing along. 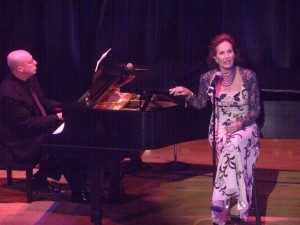