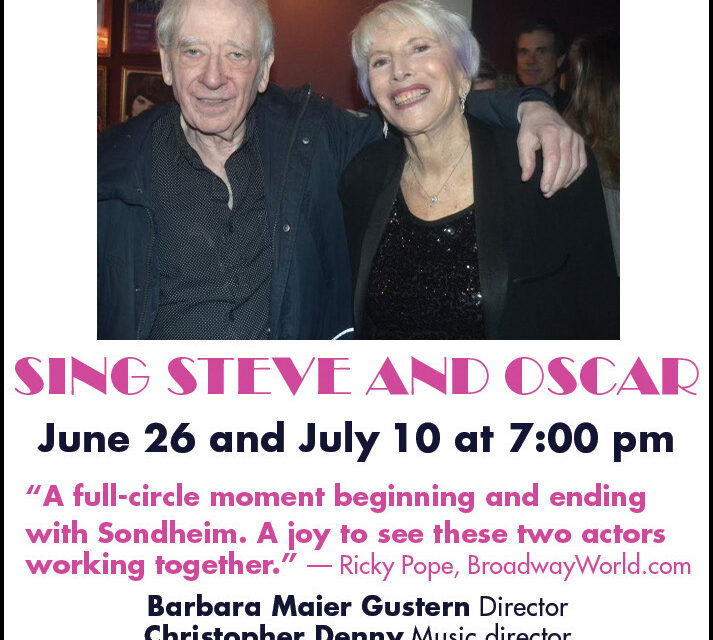 Barbara Bleier and Austin Pendleton are back by popular demand to Sing Steve and Oscar on June 26 and July 10 @ 7 pm at Don’t Tell Mama with Christopher Denny, Music Direction, the show directed by Barbara Maier Gustern. www.donttellmamanyc.com

10 Years of New Writers: Celebrating Feinstein’s/54 Below’s 10th Anniversary. Walk down memory lane on July 3 at 7 and 9:30 pm with many of the writers as they revisit their early work and remember the late nights, the laughter, the many tears. Featuring the writers who have been a part of changing the face of contemporary musical theatre and the up-and-coming artists who are stepping up to take up the mantle. An evening to reminisce with Joe Iconis, Drew Gasparini, Joey Contreras, Ryan Scott Oliver, Emerson Mae And Murphy Taylor Smith, Amanda D’Archangelis, Kait Kerrigan, Bree Lowdermilk, Georgia Stitt, Sara James, Gabriella Joy Rodriguez (The Color Purple Tour) and more. Live and live-streamed. Produced by Molly Heller and Vaibu Mohan, with music direction by Greg Paladino. www.54Below.com

F Michael Haynie (Wicked, Carrie, Dogfight), currently leads the First National Tour of Disney’s Frozen the Musical as Olaf. Back for one night only by popular demand for a special concert engagement! With over twenty-five 54Below appearances, F Michael Haynie: Into the Unknown will mark F’s return in a showl featuring songs from their musical in development, Victory City, originals, spicy covers, some musical theatre favorites with special guests, and their signature contemporary sound. Special guests to be announced. F Michael Haynie plays Feinstein’s/54 Below (254 West 54th Street) on July 30th, 2022 at 7pm. www.54Below.com.

D’Yan Forest will be Swinging on the Seine at Joe’s Pub on July 31 @ 7 pm in 1960’s Paris in a naughty coming of age story. www.publictheater.org