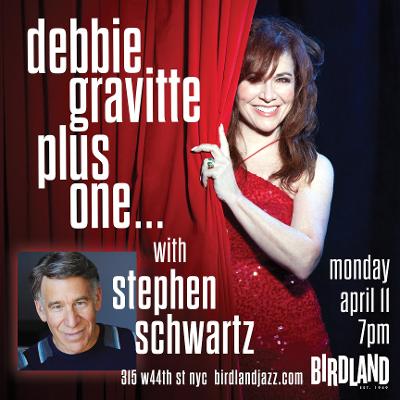 BIRDLAND JAZZ CLUB will present Tony Award-winner Debbie Gravitte in a special residency “Debbie Plus One” starting Monday, April 11 at 7:00 PM. Gravitte has been in theater long enough to have made some very special friends, and she welcomes Stephen Schwartz (April 11), Marc Shaiman (May 9), and Harvey Fierstein (September 12) for three separate evenings full of songs, stories, and surprises. Each show has a $40 music charge. Birdland is located at 315 West 44th Street NYC www.birdlandjazz.com

Bistro, BroadwayWorld, MAC, and Margaret Whiting Award winner Celia Berk will return to the Laurie Beechman Theatre in April for three performances following a successful, sold-out debut of On My Way To You: Improbable Stories That Inspired An Unlikely Path. Tickets and more information are available here: April 10th at 4PM, April 21st at 7PM, and April 27th at 7PM. Mark Nadler directs. Tedd Firth is the Music Director and accompanist. In her new show, Celia Berk explores the courage and daring of iconic performers including Al Jolson, Maria Callas and Barbara Cook, and the deep impression they left on her. The songs are as unexpected as the stories, from Tin Pan Alley to Pop and more. Tedd Firth and Mark Nadler’s arrangements provide new ways of looking at classics. www.celiaberk.com

Candace Bushnell Iconic author and creator of Sex and The City will bring a cabaret version of her acclaimed one-woman show to Café Carlyle beginning on May 10 for five special performances. In this Café Carlyle show, the original Carrie Bradshaw takes us on a whirlwind tour of New York City, from Studio 54 to Sex and The City to Lipstick Jungle and beyond, sharing her remarkable philosophy through stories of fashion, literature, and sex while pouring Cosmos in Manolos.Tickets for the Café Carlyle shows are: May 10, 11, 12, 13 and 14.  Tickets can be purchased through Tock.