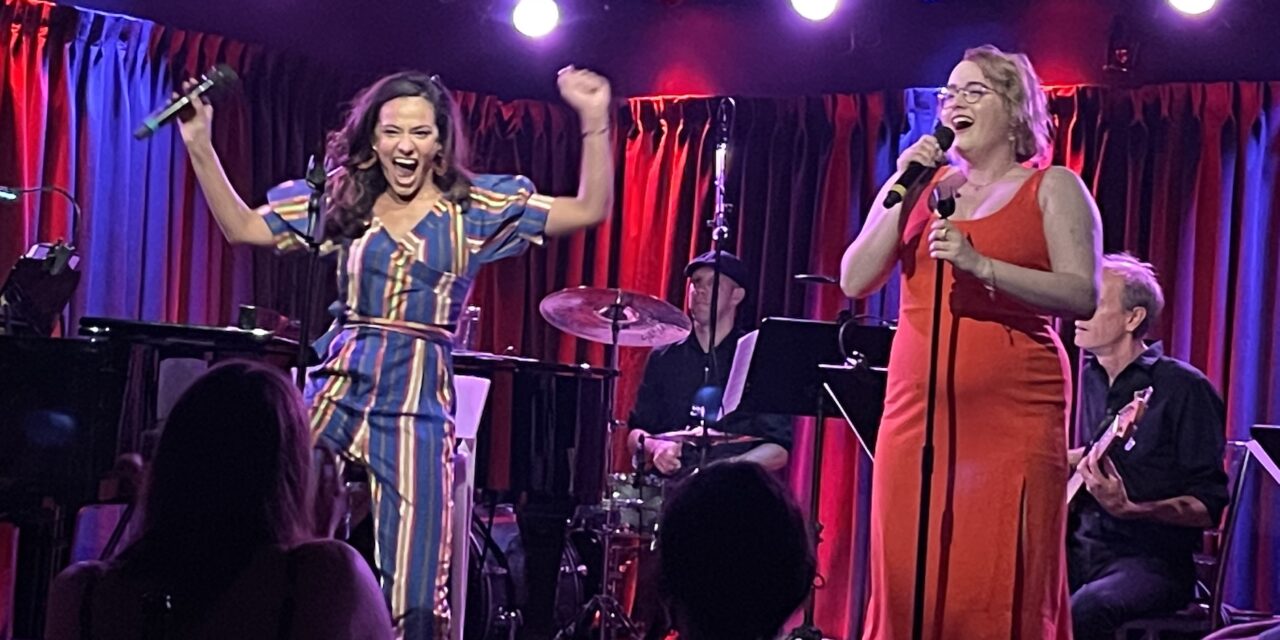 My 16-year-old has been going to theater for almost ten years. The show that most resonated with her was The Prom—a musical ostensibly about bullying . . . and finding the strength to embrace one’s full self. And its young stars Caitlin Kinnunen and Isabelle McCalla (brilliantly cast by The Telsey Group’s Bethany Knox) recently brought their considerable talent to bear in a fun, engaging evening of song, Babe!, to The Green Room 42.

On Broadway in The Prom, Kinnunen and McCalla portrayed a high school lesbian couple whose romance is thwarted by small-mindedness and nearly derailed by the well-meaning efforts of a few Broadway stars needing a cause. Directed by Vasthy Mompoint and backed by a four-piece band, “The OG Broadway Lesbians from The Prom Present Babe!” (as it was billed) is a fun, humorous cabaret performance with a keen sense of the times. The evening opens with a duet, splitting duties on “The Lady’s Improving” from The Prom. The duo quickly hit their marks with their core numbers from the show as if no time has passed. McCalla slays with “Alyssa Green,” a number about parental pressure; while Kinnunen offers “Don’t Be Gay in Indiana.”

Each is engaging, loose and warm. They are honest about their sexuality and back it up in their song selection. McCalla chose “I Want to Dance with Someone,” sung with a huge wink and a desire to embrace Javier Bardem and Penelope Cruz; and Kinnunen owned “Changing My Major” from Fun Home. (Note to a producer/casting agent: she’d be an amazing choice for Medium Allison.)

They bring their sense of humor to bear with a recurring riff which illustrates the one limitation of their capabilities: both seem to be unable to riff and run like many pop stars.

They wrap the evening up with a series of pre-selected (by audience members) duets, or what they call the “British Blue Ball” section of the evening. Here they charm with Sondheim’s “Agony” from Into the Woods and “Pretty Women” from Sweeney Todd. And if anyone revives Side Show they do a formidable “I Will Never Leave You.”

Being an actor/singer means that you are, among other things, a storyteller. Both Kinnunen and McCalla are excellent storytellers. They bring heart and true emotion to every number, while also having fun. They make for an indelible act with lush harmonies and pure phrasing. And they enjoy performing, which makes it that much more compelling for the audience. Their openness, talent, and adept song choice adds to their brilliant chemistry.

Babe! Was performed June 17 and 19 at The Green Room in the YOTEL Times Square (570 Tenth Avenue, between 41st and 42nd Streets). www.greenfignyc.com