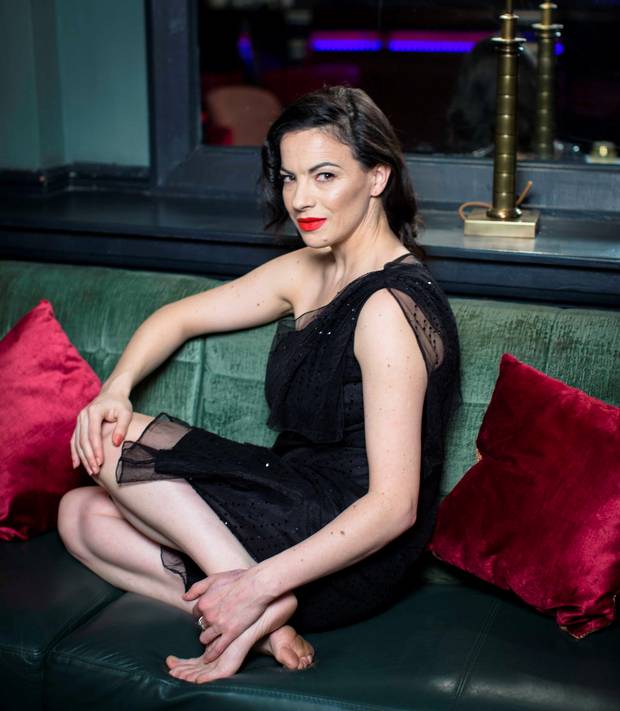 New York has its own Catagory 5 hurricane crashing into the Irish Arts Center with powerhouse waves of music, madcap energy and a fierce interpretation of the music of Belgian Jacques Brel. Her name is Camille O’Sullivan, and she is backed by a vibrant quartet led by her longtime collaborator, pianist Feargal Murray. From October 18-22 for 90 minutes, they own the tiny Donaghy Theater with O’Sullivan’s emotional whirlpool of personas and Brel’s hypnotic eclectic songbook.

It began softly as she walked in from the back of the theater in a black suit with a hole in the sleeve. Taking center stage at the microphone with a gentle, a cappella “Marieke,” in Dutch and English, her arms wove gracefully as her voice built to a desperate plea, “Oh Marieke, Marieke, rewind the time.”

Turning on a dime, the jacket came off and she gave the audience a sly smile. The band revved up and O’Sullivan was off, stomping across and off the stage, into the audience, flirting, touching, delivering a soaring “Vizoul,” almost, but not quite, overwhelmed by the band. At the end she paused for a sip of water (later, she became even looser and the sips were wine). She welcomed the audience to an evening of Jacques Brel and his moods of sadness and passion.

Sweating and taking off and putting back on her sequined white short boots, the Irish-French O’Sullivan poured her own passion into Brel’s repertoire, which does not lack any theatricality itself. Her versions were in French and English, her accents slightly muddled, her voice shifting from a whisper to a growl, from clear, secure lines to gravely shouts, some wolf-whistles and banging some keys on the piano. A blend of theater, rock with a slash of Kabaret, different personalities emerge, with facial shifts looking slightly demented in the tongue-twisting, “Carnival” to innocence for the sincere gift of love in her closing number, “If We Only Have Love.”

O’Sullivan has a deep connection to Brel who inspired her to sing, but she delivers his songs as Original O’Sullivan. Some songs are being analyzed even as she sings them, like “Song for Old Lovers,” with the poignancy in lines like, “The old they never die, they just go to sleep one day.” Draping a black veil over her head, she delivers a dirge-like, “My Death” and is heartrending with “Ne Me Quitte Pas” (“If You Go Away”).

Brel wrote songs inspired by his time in the war, harrowing with the young suffering soldiers in “Next” and reflecting the worn despair of battled sailors in the eerie waltz-time, “Amsterdam.” With stage lighting red, and wild abandon, she whirls barefoot to a tango tempo for “Bulls,” riveted by the Sunday bullfights.

O’Sullivan generously acknowledged Feargal Murray and his band who were hand-in-glove with her absorbing dives into the songs. On drums was Paul Byrne, on guitar, Andrew Zinsmeister, and versatile Charlotte Glasson played flute, saxophone, violin, and musical saw, all adding unique flavoring to Camille O’Sullivan’s captivating, free wildness that left her exhausted. This is a show that is special — exciting, bizarre and magnetic.