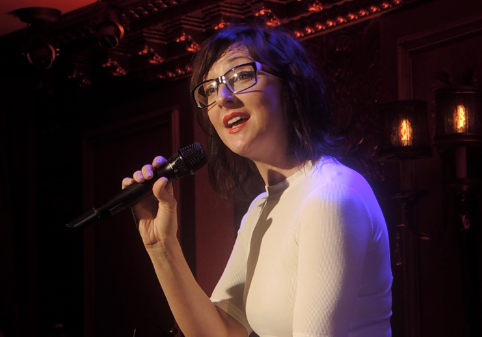 Meet Broadway Tony Nominee and Theater World Award Winner Carmen Cusack (Bright Star), as she readies for her debut at Feinstein’s/54 Below on August 9 at 9:30 pm. Carmen is slated to do additional shows on August 11 (9:30 pm) and August 14 & 16 at 7 pm.

She tells Theater Pizzazz that there were several gems that were originally included in Bright Star that were whittled away as the rehearsal process began.  But she’s eager to bring some of them back in her new show and sing them for you for the first time.

Carmen may be new to the New York scene, but she has graced the West End of London stages in the roles of Elphaba in Wicked, Christine in Phantom of the Opera and Fantine in Les Miz. She was born in Denver, Colorado and at age 5 made her singing debut at her Church with “Amazing Grace” and that was the beginning of her career. Hear and learn more when she takes the stage at 54 Below.