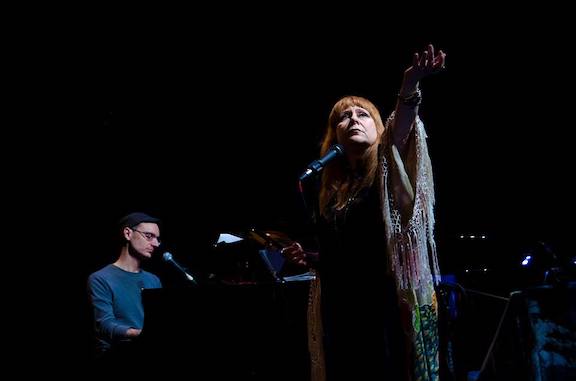 Carol Lipnik is a true artist, a term perhaps used too loosely to describe some performers.  She is also a dichotomy of onstage and offstage personas – when you speak with her, everything about the Coney Island native says “Brooklyn Jewish gal,” someone whose warm, easy manner instantly suggests a feeling of mishpucha (Yiddish for “family”).   Everything about her on stage, in dress, in affect and in song, says “spiritual Bohemian poet.”  (Perhaps not by coincidence, “Lipnik” is the name of an actual Bohemian village!)  She is a one-of-a-kind performer who may not be everyone’s cup of tea, but for this audience, she made for one helluva cup at Joe’s Pub.  Tonight, the singer returned for her second album release show of the year, the previous being for Goddess of Imperfection.  She performed much of both albums to the great joy of her fans.  The new album consists nearly entirely of songs written by Ms. Lipnik.

Ms. Lipnik is a singer and songwriter who extensively utilizes technology to enhance, not distract from, many of her beautiful songs by giving them an ethereal quality.  Blessed with a four-octave voice, this includes things like multitracking, echo and all harmonization on her recordings.  Much of this was magically replicated live at Joe’s Pub through some alchemy of technology and masterful work at the control booth.  Backed by a trio of musicians who really get her intentions, and a live person to provide harmonies, the performer enraptured a full house of enthusiastic Carol Lipnik devotees.

Appearing in a long, flowing outfit that evoked her ethereal spirit, the singer began with the title song, “Blue Forest,” using her hands to both give blessings and draw energy, reminiscent of the outstretched hands of a Jewish priest reading from the Zohar.  The beautiful harmonies, provided by both technology and by a statuesque, goddess-like London singer with chiseled features who goes only by “Ali,” were almost otherworldly.  All of the band members and Ali were dressed in black.

Ms. Lipnik’s already eclectic set included a couple of unusual choices – “Thrice Toss These Oaken Ashes” (Thomas Campion), the only song on Blue Forest not written entirely by Mr. Lipnik, is an Elizabethan song dating back to 1617, highlighting the baroque period.

One could hear influences of John Lennon and Harry Nilsson in the metaphoric “Tick Bite,” particularly with its diminished and minor chord progressions and double-tracked vocals.  The ukulele was the rhythmic star of this song.

Turning to the Goddess album, “Wildegeeses (Michael Hurley) was described as “a torch song for a wild geese.”  Singing of a bird with “long legs and long ears and tail,” the production had a vaguely Irish feel.  Her long final note was, appropriately, like a bird call.

The outstanding work of guitarist Matt Beck had his guitar sounding like an electric violin for “Hope Street” written with Ivan Pokorney, in which Ms. Lipnik’s repeated, mantra-like moan was altogether quite trippy.

In “Ride on the Light of the Moon,” Ms. Lipnik uses her voice like a spiritual instrument.  Ms. Lipnik is a musical master of caesura, the subtle pauses between words that can make all the difference in delivering a line.  This was evident throughout, and notable on this tune.

Her “final” song was “Love,” one of the few upbeat songs of the evening.  It had a funky vibe with a pulsating synthesizer.  One might detect the surprising influences of George Harrison’s “Within You Without You” and the Doris Day hit “Secret Love” in the crafting of the song.

There was no “faux encore,” as the audience firmly demanded one after she spirited herself off the stage.  The double encore of “The Man In The Long Black Coat” (Bob Dylan) and “The Two-Headed Calf” (based on a poem by Laura Gilpin) left the audience still wanting more, and the artist patiently gave them personal audiences (and signed CDs) after the show.

Carol Lipnik is a magical muse of a performer.  This reviewer also listened to all of Blue Forest and Goddess of Imperfection after the show.  This artist is well worth your time and money.  As one patron told me afterwards, “She is what we need for our times at the end of the Empire.  She gives us much needed hope.”  Another, visibly moved from the performance, found her “heartbreaking.”