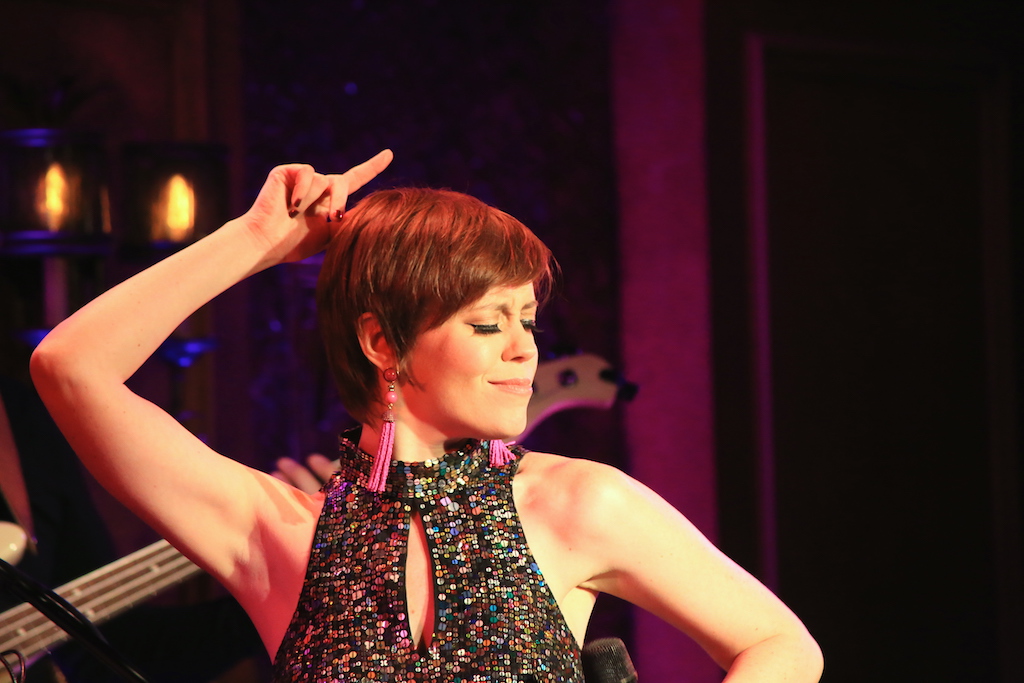 Janis Joplin. Leslie Gore. Dusty Springfield. Nina Simone. The 1960s was the breakout decade for scores of now-legendary women vocalists, composers, lyricists, and performers. Their astounding talent, originality and passion lit up the music scene. How convenient! I’ve just described the way Carole J. Bufford lights up the stage at Feinstein’s/54 Below in her new show, You Don’t Own Me: The Fearless Females of the 1960s.

For many, the music of the ‘60s resonates with unaltered prismatic hues scented with hope, wildflower, weed and unified dissent. Others might know songs on a less intimate level. No matter. All across the animated room, there was dancing in the seats.

Stunning in a shimmering sleeveless shift, tassel earrings, her beautiful features framed by a pixie cut, Carole evoked Twiggy, but a Twiggy with a vivacious personality, spectacular voice and a remarkable stage presence. From the moment she took the mic, Carole radiated sheer joy. One might think that a stunning voice and great enthusiasm would be the winning combo. In fact, it takes a great deal more. One of the reasons that You Don’t Own Me is an astounding triumph is Carole’s deep interest in and keen understanding of the music of that trailblazing period. This is a performer who understands what makes a performance click: the backstory. The result? Every song resonates with the savor of vibrant youth, social change and a sexual revolution that spelled liberation, experimentation, bounteous ecstasy and just as much vulnerability.

Carole has a striking and rare ability to confer exquisite authenticity to every number. Her powerhouse rendition of “Me and Bobby McGee” was not performed as Janis Joplin; it was as passionate, edgy and big as Joplin had intended. Her breathtaking “Will You Still Love Me Tomorrow?” radiated that mystified honesty penned by Carole King. Shirley Bassey’s renowned recording of “Goldfinger” might well be one of the 20th century’s registered landmarks. Carole rocked that song with a sinewy force so dynamic, it belonged to her alone. She has a voice that captivates and thrills, redefining excellence over and over. Lush with rich low notes and a soaring, crystal register: her range never compromises.

When Carole is immersed in a song, her eyes are trained on another time, her mind transported and her heart, full. I saw longing. I saw her hope. I saw innocence, lust, anger and pride. Such emotional investment and veracity are the crown jewels of live performance. You Don’t Own Me is something beyond cabaret. Carole’s narrative is fresh, enchanting, and relevant. Her admiration of the women who ruled the decade is founded as much on their brilliance as their achievement. The patina of retrospect often obscures the struggle that generated a generation’s greatest successes. Not so in this case. Carole’s detailed snapshots of the artists’ extraordinary, groundbreaking and sometimes-heartbreaking circumstances infuse the show with depth, humor and humanity. You Don’t Own Me is an erudite tribute to the women whose creativity, strength and perseverance changed the playing field. Carole’s anecdotes were eye opening, sensitive and inspiring. “I’ve Been Loving You Too Long” has a history that belies Tina Turner’s compelling vigor. Carole’s rendition of Etta James’s “Spoonful” was executed with a uniquely perceptive brand of intoxicated rapture. Cohesive and smooth, the show is more than a diversion; it’s a fulfilling experience, much like stepping into a delicious novel.

Accompanied by four of New York’s most sought after musicians, the ensemble generated the kind of vibrant energy that occurs when synergy and exhilaration meet. With musical director and pianist Ian Herman at the helm, the band was at once tight, together and viscerally intuitive. One could see, feel and hear guitarist and vocal accompanist Peter Calo’s rapture. Tom Hubbard on bass was superb, registering both personal satisfaction and the intoxication that comes with this level of reciprocal action. Drummer Howie Gordon was sensational: skilled, intuitive, the definition of what it is to be in one’s bliss. Carole Bufford gives a performance so rich, so lived-in, it’s mind-bending to realize that this was the show’s debut. This is what authenticity looks like.

You Don’t Own Me is magnificent. If you’re looking for a fabulous show, this is it.