Cat On a Hot Tin Roof 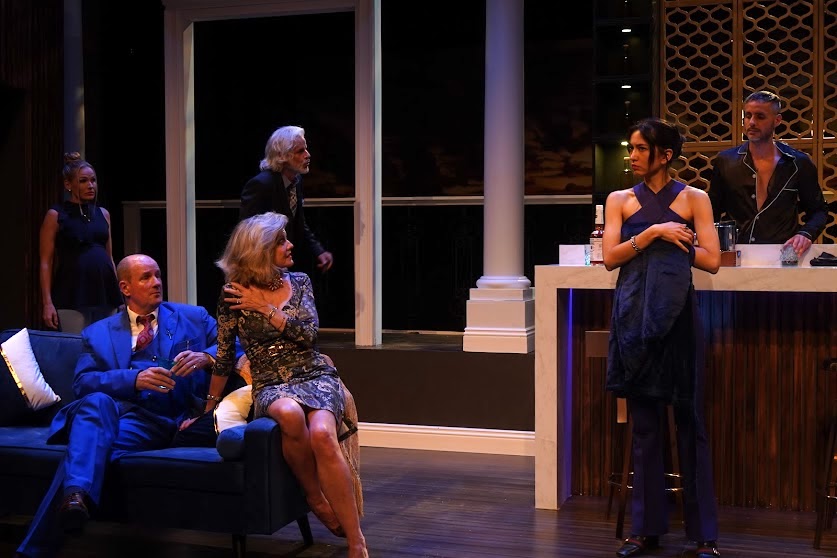 Cat on a Hot Tin Roof opened this summer at Ruth Stage Theatre at St. Clement’s after being postponed numerous times due to the pandemic. This is the first of Tennessee Williams plays that his estate allowed to be produced Off-Broadway.

Cat on a Hot Tin Roof, directed by Joe Rosario, is set on Big Daddy’s Mississippi property. He is the patriarch of the Pollitt family and a self-established plantation millionaire. He has recently been informed of a clean bill of health that has invigorated his vigor for life. Unfortunately, this is not the case and the play goes on to slowly unravel the truth of his condition.

Before the truth is revealed, the play focuses on the unhealthy relationships of the Pollitt family. Maggie, the Cat (Sonoya Mizuno) and Brick (Matt de Rogatis) open the show with an extensive monologue performed by Mizuno. Here the audience learns of their marital problems which include Brick’s lack of enthusiasm in wanting to be physically intimate with Maggie and of worsening alcohol addiction. She goes on to banter and complains about their relationship, family and childless life. She eventually discloses that she slept with Brick’s best friend and possible love interest, Skipper. Skipper committed suicide which propels Brick’s depression, grief and alcoholism. In a drunken episode, he attempted to jump the track hurdles of his high school’s field breaking his ankle. His outlook on life is bleak, yet he must try his hardest to rejoice in the day’s festivities. It is Big Daddy’s birthday and the day has only just begun.

The play continues with Big Daddy’s (Christian Jules Le Blanc) deliberations on life, family, his wife and a new attitude toward living. He is energized, loud and obnoxious, true to his Big Daddy persona. He goes on about how much he hates his wife and pretty much all of the family except for Brick, who is the only one privy to his lengthy discourse. He attempts to help Brick conquer his addiction by getting to the root of his problem. Big Daddy tries to talk or, more so, lecture Brick on how to overcome his afflictions. This proves unsuccessful yet leads to the revelation of Big Daddy’s actual condition.

This 2022 revival of Tennessee Williams classic offers some solid talent, albeit a bit dated text. The players included Alison Fraser, Tiffan Borelli, Milton Elliott, Spencer Scott. The underlying concepts are not fully addressed but interesting to see how Williams went about synthesizing such issues. The creative team, which includes set design by Matt Imhoff and lighting by Steve Wolf, did an excellent job of bringing this classic to a modern era.

The play runs through Aug. 14 at the Theater at St. Clements, Manhattan; ruthstage.org. Running time: 2 hours 45 minutes with two intermissions.