Catherine Russell ‘Harlem on My Mind’ 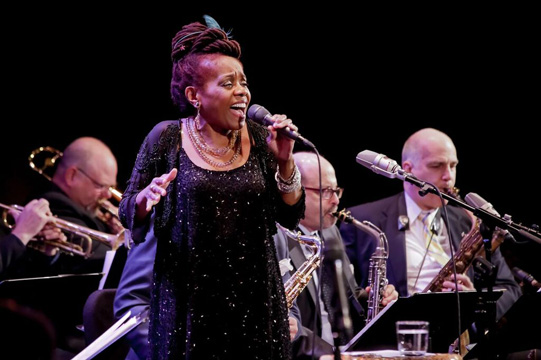 Rhythm captivates me/Hot rhythms stimulate me/Can’t help but swing it boy/Swing it brothers swing… (“Swing! Brother, Swing”-Clarence Williams/Walter Bishop/Lewis Raymond). Celebrating the release of her latest CD, Harlem On My Mind, Catherine Russell and her exceptional band treat us to an evening of flinty, robust numbers from the 1920s through the 1940s. Born to musicians Carlene Ray and Louis Russell, the vocalist cut her teeth on this music. Unlike fellow appreciators, she uncannily inhabits it, giving us a real glimpse into the attitudes and styles of the times.

“I Can’t Believe that You’re in Love with Me” (Clarence Gaskill/Jimmy McHugh) follows with one-two rhythm and woven, brass underpinnings. The precision of Russell’s voice never ceases to amaze me. Not that she’s stiff or withheld, but every note emerges clean without vocal shadow or dangling musical thread. Vocal pivots are seamless and often unexpected, creating slight frisson. The a capella opening of Sy Lover/Trummy Young’s “T’Ain’t What You Do” ( It’s The Way That You Do It) is pristine. Brass is crisp and playful. The band infectiously sings backup. Tonight’s Special Guest is 101 year-old tenor saxophonist, Fred Staton, whose sister was the late Jazz/Blues songstress, Dakota Staton. The veteran collaborates on “Don’t Take Your Love From Me” (Henry Nemo, first recorded by Mildred Bailey.) Russell sings eeeezeee, leaning in and watching the elder musician with admiration and respect. Staton weaves around the melody with finesse and feeling. Music is not timid, but subtle. It appealingly ends in something of a doodle. The room rises to its feet.

“When Lights Are Low” (Benny Carter/Spencer Williams) is a love song with bounce. Up goes Russell’s shoulder, one hand pats her hip as she shifts from side to side. The vocal swings out and back, dips and retreats. Jon-Erik Kellso’s trumpet flirts, Mark Shane’s piano winks. Life’s so appealing she sings, leaning back to make space for it. Musical Director Matt Munisteri’s guitar sheds candlelight on “You’re My Thrill” (Jay Gorney/ Sidney Clare) – sheer film noir seduction. Russell’s tuneful moan is as thrilled as it is sorrowful. “Talk to Me, Talk to Me” (Joe Seneca) presents a similar mood. The vocalist pleads with free-of-pride pith. “He gave me every reason to wanna sing and to stop singin’ at the same time,” she comments, referring to Little Willie John who popularized the number.

Russell manifests sass like few singers of her generation. Nor are there many who can make “hi-de-ho!” sound as utterly natural. Clarence Williams/ Eddie Green’s “You’ve Got the Right Key (But the Wrong Keyhole)” is sexual innuendo on the hoof. Phrases surge and roll like hammocks. ‘Waya”- where, she sings as if born to the accent. Salty and swell, the song rides on burlesque rhythm.

Originally recorded by Ethel Waters, Irving Berlin’s “Harlem On My Mind” arrives in a limo replete with rolled ‘r.’ The story verse and hip swinging chorus are sung by a lady who’s traded up but longs for the plainspeak truth of her roots: I’ve got Harlem on my mind/I’ve a longing to be lowdown/And my “parlez-vous” will not ring true/With Harlem on my mind… Languid, thoughtful, open-throated performance makes us believe the sentiments not just hear them. It’s gravitas with attitude. Shane’s piano comes in as if from above with phrasing all his own.

We close with Ooh Lord, when my kiss becomes an everyday thing/And my voice becomes just a busy ring… “Let Me Be the First to Know” (Leroy Kirkland/Dinah Washington/Pearl Woods). Russell is all woman, muscular and dignified in her vocal entreaty. A soulful blues by an artist (and band) who “get it.”

High caliber arrangements, mostly by Andy Farber, are a testament to skill range from soulful, measured, complexity to fun.