Catherine Russell: Send for Me 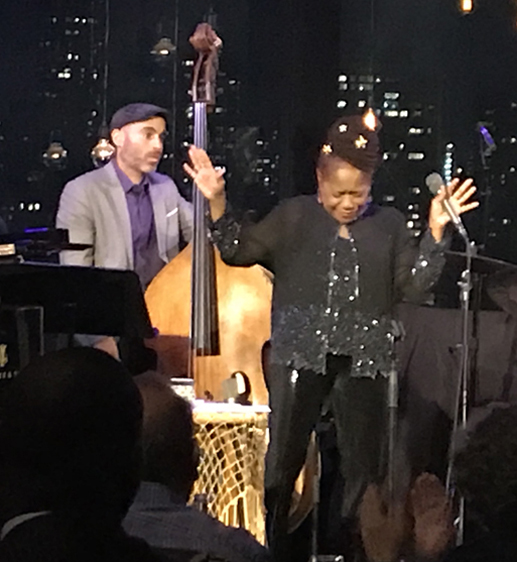 Some things are a given. Tomorrow the sun will come up. Wheels are round. Apples crunch. And Catherine Russell delivers. Once again the vocalist and her fine band assumed the stage Thursday night at Dizzy’s for an evening of jazz standards and blues, played with juice, and sung with authenticity and appreciation. Though Russell is a pleasure on CD, watching her dance, synthesize music and lyrics, and communicate has unique appeal.

“East of the Sun, West of the Moon” (Brooks Bowman) emerges as essence, no distracting embellishment, all yearning. Drummer Mark McLean has a grand time watching his peers as he wields the sticks. Tal Ronen embraces the bass’s fret and neck. Piano keys are stroked, then swiped. Russell’s right hand opens and closes, pats, reaches, and snaps fingers. Air around her responds. Long-lined notes emerge pearly. 1937’s “Gone With the Wind” (Allie Wrubel/ Herb Magidson) has similar clarity. This one’s melancholy, almost a march. Short words arrive multi-syllabic, as if slowly swallowing.

The artist has a penchant for female singers of the 1920s. “It’s Right Here for Ya” tracks back to Mamie Smith and New Orleans vocalist Blu Lu Barker. “Borrow from the best, you know what om sayin’?” Russell remarks. “If you don’t get it/Ain’t no fault of mine . . . “ she sings, eyebrows raised. “There’s lots of honey in each rose for the bee/It’s up to him to get it, don’t you agree?” The tune is a suggestive bump n’grind—down a runway, from door to barstool, across Bourbon Street. Ever a lady, Russell can flirt with the best. There’s casual irony and some heat.

A pulsing “Going Back to New Orleans” (Joe Liggins) morphs from swing to calypso and back making us want to move. “Since this is a drinkin’ establishment . . . ” introduces “One Scotch, One Bourbon, One Beer”  (Rudy Toombs), a pulp paperback-like song. Side step, side step, uh huh, eazeeee. Russell’s face registers the name of each drink as if pouring. Fatalism suffuses lyrics. “That bar’s lookin’ pretty good over there,” she quips.

Adrenalized, “At the Swing Cats Ball” (Louis Jordan) and “Sticks and Stones” (Henry Red Allen) are sheer jitterbug. “Allen worked a lot with my dad (Luis Russell) and Louis Armstrong (on whose knee Catherine used to bounce). They often recorded together.”  Of the same ilk, the iconic “I’m An Errand Girl for Rhythm” is a jacked-up instrumental with lyric splash. Mason’s and McLean’s hands fly as if each had four. Lyrics whip out. Consonants cut. Hips shimmy.

Catherine Russell’s latest CD is Send for Me.
https://www.amazon.com/Send-Me-Catherine-Russell/dp/B09QF44V22