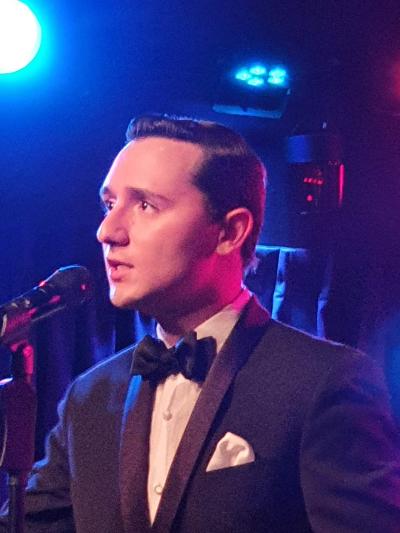 “I haven’t been here in a year and a half,” Charlie Romo said at the start of his terrific show at The Green Room 42. Only 25, Charlie has grown much since he first began performing in New York nightclubs in his late teens. In the time since “The Pause,” when all of New York nightlife was shut down by the pandemic, Charlie has done nothing but grow, and in so many ways – he has a beautiful, loving girlfriend; he earned a master’s degree in education and is now a teacher; and he has grown light years as a performer.  Charlie, always a pleasant singer and solid performer, has become a seasoned professional with chops.  Charlie confessed that he put on a few pandemic pounds, going from perhaps a bantamweight to a lightweight.  The guy on stage?  A heavyweight.  He has charm, a terrific voice, excellent interpretive skills, a love for the music he sings, and total stage presence.  He owns the stage.  Yet he’s willing to share it, with frequent invitations for the audience to sing along, and with a guest artist as well.

Charlie has borrowed from the masters he emulates but does not copy – Dean Martin, Vic Damone, Sinatra, and perhaps most of all, Bobby Darin – and makes the music his own, with the help of a great quintet, led by pianist and musical director Matt Baker, with Daniel Glass on drums, Dan Pearson on woodwinds (sax, clarinet and flute), Jack Cavari on guitar, and Boots Maleson on bass.

While he played the usual homage to the aforementioned male crooners with songs like “Just In Time,” “That’s Amore,” and “Sway,” he also showed off his love for and knowledge of doo-wop and other 50’s rock, with songs from Paul Anka, Dion, the Jay Black version of “This Magic Moment,” and a clever medley of songs honoring those who died in the plane crash known as “The Day the Music Died” – wrapping up songs by The Big Bopper, Buddy Holly and Richie Valens into the anthem about this tragedy, “American Pie.” He did a killer rendition of “Mack The Knife,” following Darin’s 1959 blueprint.

Taking a cue from Anka during one song, he worked every inch of the room, managing to shake hands or fist bump nearly everyone in The Green Room 42.

Closing out with Bobby Darin’s great number, “The Curtain Falls”, Charlie encored with a lively “Save The Last Dance for Me,” which got the audience up and dancing.

Definitely catch Charlie Romo the next time he’s on stage.