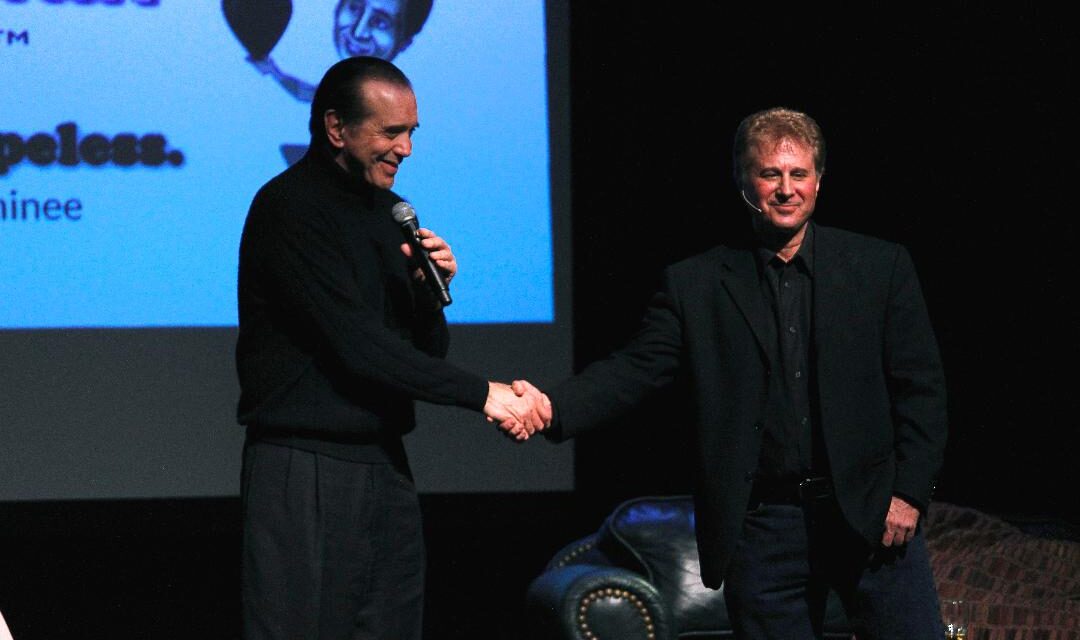 Oscar Nominated Actor, Director, and Writer Chazz Palminteri has entertained audiences for over three decades in a variety of roles from Mulholland Falls to television’s Modern Family, Godfather of Harlem, and Bullets Over Broadway (which garnered him an Oscar Nomination)

And, of course, the role he is most known for is Sonny in the iconic movie A BRONX TALE, directed by the legendary actor Robert DeNiro. A BRONX TALE was originally a one-man show that has moved audiences not only here in America – but overseas. Since then, Chazz has taken the one-man show and morphed it into a movie, but also a Broadway and touring Musical. Presently, Chazz continues teaching actors, acting, directing, and inspiring audiences in all mediums with his performances.

Award Winning Actor/Comedian PETER FOGEL is no stranger to late-night comedy and theatrical audiences across North America (and parts of New Jersey). He is a hilarious comedian who audiences have seen countless times on television but didn’t know his name. In the ’80s, he was the “Ring Around the Collar” man for WISK DETERGENT and a voice-over actor for American Express, Mazda, and Miller Lite, to name just a few. Peter worked and appeared on over 22 shows, such as HBO’s Comedy Central, Comic Strip Live, A & E’s Comedy on the Road, Men Behaving Badly, and Married with Children. Over the years, he’s shared the stage with Ed Asner, Harry Anderson, Ray Romano, and Dennis Miller.

This funny man was also the audience warm-up for Robert Klein’s 11th HBO Special. Peter also improvised on stage with Robin Williams (and lived to tell about it.) Before touring the country with his solo show, TIL DEATH DO US PART… YOU FIRST! Peter was the National Touring Star of MY MOTHER’S ITALIAN, MY FATHER’S JEWISH, & I’M IN THERAPY!

Question: Chazz, how did you first see Peter Fogel’s show Til Death Do Us Part… you First!

Chazz: Well, Peter and I had a mutual friend. I did not know Peter. I happened to be in Florida on business. Our friend says, ‘Chazz, you should see my buddy, this very funny guy Peter Fogel’s solo show. So not announcing myself, I sat in the back and heard this audience laughing hysterically at this gifted comic actor’s performance. I was blown away at how funny he was – but more importantly, how the show, the writing, and the pacing – resonated with the audience. The show is about the absurdities of love, marriage, and relationships and what everybody goes through. Couples were laughing and elbowing each other as if to say, “See, this is what you do to me!” I was so impressed with the solo show’s potential that I met Peter later in the lobby. Right there, on the spot, I offered to take his play on to the next level and get it ready for off-Broadway and beyond.

Question: Peter, what was your reaction when Chazz approached you after the show?

Peter: “My jaw dropped – I couldn’t believe it. Then I realized WHY my friend did not tell me who was going to attend. I am glad he didn’t… (laughing)!”

Question: Peter, you say the dating and relationship stories are taken from your life?

Peter: Yes, just like in the show LAW and ORDER – the dating and relationship stories are ripped from the headlines. I was on a first date with a lovely, “normal” woman when she said, “I have to be honest with you. Under advisement from my attorney, I have to tell you I am a person of interest in my ex-husband’s death…the authorities always go to the spouse or ex in these matters. (getting upset) I SWEAR I DIDN’T DO IT… the MAN drank a lot; he fell down the stairs, OKAY…? OKAY? … at least that’s the alibi I gave the judge!’ Then without losing a beat, she asked me to pass the salt and casually went back to eating her scampi.

Chazz: “I loved that story and laughed so hard at it. And I thank GOD I am married and not dating today. But I said to Peter … we have to put it in the show!”

Question: Chazz, A BRONX TALE is a coming-of-age drama. How would you describe TIL DEATH DO US PART… YOU FIRST!?

Chazz: “A coming of A MIDDLE-AGED STORY. A late 50’s man/child has – due to his upbringing (a very dysfunctional family)… and being a touring comedian, he fears commitment and marriage.

Everyone has that little voice in their heads that guides them to make certain decisions in their life (right or wrong). Peter is confused about the choices he’s made with romantic partners. So, in a voice-over, I play his conscience … guiding and mentoring him to make the right decision with his longtime girlfriend—so he has one. Last chance to be with the one woman that can change his life. I don’t care what stage of life you are in — no one wants to end up alone, right? The show digs deep into the craziness of relationships (men and women). Still, it is hilarious – and that’s why the show works.

Question: Peter, I am told the autobiographical tale is based on a true story?

Peter: “Yes, all the stories I weave within the multimedia show are true – the names have been changed to protect the guilty. I was in a long loving relationship with my girlfriend – things were going great. The lady asks me, “Peter, what are your intentions with me?” I said, “Well, it’s Valentine’s Day – I thought dinner and a movie!” NOT the answer she wanted — she brought up marriage, and I was not ready to discuss marriage on Valentine’s Day!” She broke up with me and stormed out of my apartment!

Question: Peter, who is this show written for?

Peter: “Folks from their 40’s to their 80’s love the story, the theme. Single, Divorced, or Devoted couples will relate to my misadventures. In fact, over the years, I get divorced women approach me after the show, and they all say, ‘Oh – my GOD, the story about internet dating – it’s my life. You nailed it!'”

Question: Peter — what are you most proud of about “Til Death Do Us Part…”

Peter: “Chazz is the director of my show — the audience knows this, but he’s my conscience — so it’s really a ‘show within a show.’ And I get to act with Chazz every night (albeit a voice-over).

Question: Chazz, you’ve directed solo shows over the years – what drew you to Peter and his writing?

Chazz: “Yes, I’ve directed only about three over 30 years. It takes a lot to impress me. But when I saw Peter’s gift for mimicry, voices, dialects, and how he moved effortlessly between 15 characters, I knew this was a show that deserved a larger audience. Here’s why: Robert DeNiro saw something in me – gave me my big break with A BRONX TALE– and I feel obligated to pay it forward. And I saw that with Til Death Do Us Part.

Question: Chazz, what makes a solo show a captivating hit?”

Chazz: “The writing – Til Death… is a linear story… it has a beginning, a middle, and an end. It’s a hero journey that Peter takes us on. We root for him to make the right decision about his love life  and, just like in life, it’s also about making the right decisions (ala A BRONX TALE). When I give motivational talks to actors and corporate audiences, I bring up the old saying, “if we don’t learn from our past mistakes – we are doomed to repeat them!”

Question: Peter, you are bringing the show to the tri-state area in a limited run; where can audiences see it?

On November 17th Chazz’s wife is producing the show at the BEDFORD PLAYHOUSE (8 pm). For tix, visit www.bedfordplayhouse.org.