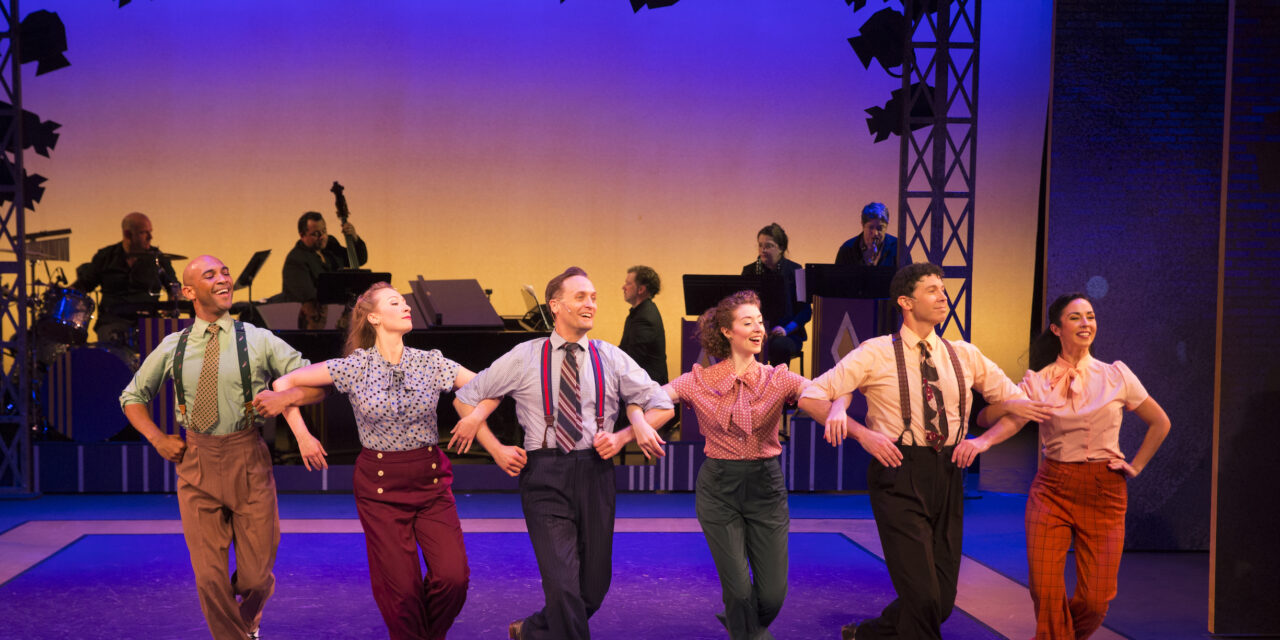 When my colleague, Marilyn Lester at TheaterPizzazz.com, reviewed the Irving Berlin revue Cheek to Cheek late last year, she called it “a singing and dancing jewel box revue.” This past year has done nothing to diminish that assessment with a new production making a strong case for its return to the splendid York Theatre Company. Bringing it back for a strictly limited engagement at its cozy, temporary space at the Theatre at St. Jeans on East 76th Street, feels just right at this moment in time with summer turning to fall. One thing the York has been doing consistently well, for the nearly fifty years of its existence, is produce maximally on minimum budgets. That creativity is most often symbolized by its Producing Artistic Director James Morgan’s clever and crafty stage designs. With Cheek to Cheek, the use of projections on a couple of flats throughout the evening is all that’s necessary for Morgan to work his elegant magic. Set against dancers and singers of fine quality, and backed by an equally talented band of musicians, the show is as attractive as it is entertaining.

This lovely musical treat is a salutation of the Hollywood films to which Irving Berlin contributed scores from the period of the late 1920s, when movie musicals were first starting, to the late 1950s when they were on their way out. Barry Kleinbort’s witty and informative book paints Berlin’s story in small brush strokes, leaving plenty of room for Randy Skinner’s direction and choreography to fill in the rest of its full palette. Comfortable working on every type of stage, Skinner’s direction and choreography of the 2015 Dames at Sea on Broadway was a triumph of doing a lot with a little, and his musical staging for the 2001 Broadway revival of 42nd Street was musical theatre excess at its most glorious (in fact, an all-new 42nd Street he is directing and choreographing, is currently playing through November 6th on the stage of the Goodspeed Opera, at its beautiful theatre in East Haddam, Connecticut).

Irving Berlin’s personal story began as an impoverished five-year-old Russian-Jewish immigrant, who arrived with his parents and seven siblings in New York City in 1893. Not speaking any English, he learned the language with a deft ear, and rose in swift time to becoming a songwriter of both words and music, selling his wares for cents on the dollar, all before turning eighteen. A few years later, he was earning a good living as a songwriter and transforming himself into a businessman of surprising acumen. He became not only wealthy beyond measure, but due to visionary insight for storytelling, he helped transform the American stage and film musical. It has been estimated that in his lifetime he wrote 1,500 songs, including the scores for twenty original Broadway shows and fifteen original Hollywood films. He received Oscar nominations for eight songs, winning but once for the now classic “White Christmas.”

The orchestra put together for Cheek to Cheek is led on piano by its Musical Director David Hancock Turner. Along with Louis B. Crocco on drums/percussion, Noelle Rueschman and Amy Griffiths on the reed instruments, and Joseph Wallace on bass, this first rate band captivate. Situated upstage center, they lead the evening off with a jaunty rendition of “Blue Skies” and don’t let up until the stunning finale of “Let’s Face the Music and Dance,” aided by the partnerships in every possible combination of the casts’ singers and dancers. With five of the six-person troupe new to this production, it was wise for the indispensable Jeremy Benton to have been retained. Fleet of feet, he’s a top notch dancer of elegance and grace, who is a worthy successor to be stepping into the shoes of Fred Astaire for much of the evening.

Of particular note was the vocal strength of Kaitlyn Davidson in her outstanding eleven o’clock torch ballad, “Love, You Didn’t Do Right By Me ” (White Christmas) as was Danny Gardner’s tap dancing and singing; a welcome pleasure in all he performed, in addition to portraying Berlin himself in certain scenes. Essential assets Darien Crago, Darrell T. Joe and Melinda Porto added stylishly in each of their individual songs and duets.

You really can’t go wrong with an evening that includes such songs as “Isn’t This a Lovely Day?,” “Be Careful, It’s My Heart,” and “The Best Things Happen While You’re Dancing,” to name three of a total of about twenty-five contained in the warm and inviting Cheek to Cheek: Irving Berlin in Hollywood. For a great time out with the whole family – – go.

The production of Cheek to Cheek: Irving Berlin in Hollywood is made possible by Riki Kane-Larimer.

Cheek to Cheek: Irving Berlin in Hollywood plays through October 16, 2022. Tickets may be purchased by visiting https://yorktheatre.org or by calling The York’s Box Office at 212-935-5820 or via email at boxoffice@yorktheatre.org.