Cheyenne Jackson Lays Out the Songs and His Life 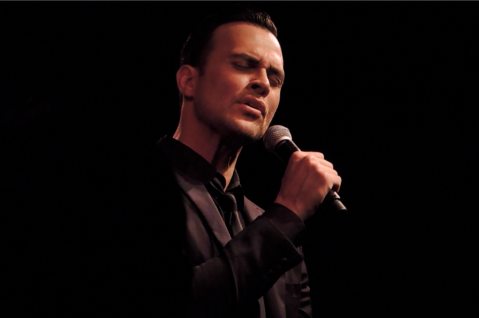 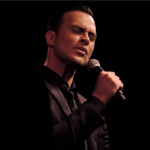 A dichotomy in selection of the show title, Eyes Wide Open, and the reality of watching and hearing Cheyenne Jackson’s luscious pop vocals while his eyes were closed 90% of the time! No matter, he’s a charismatic good-looker willing to reveal just about everything, sharing his heart and soul and testifying. In this case, a turbulent two years dealing with the death of his beloved grandparents, a divorce from a long term partner, a 12 step AA program to get sober where he met and married a new lover.

This boy hailing from a small town in Washington state, with no running water and an out house, certainly didn’t have a lot of theater around to inspire but did have parents who shared the gift of music and gave him unconditional love. At age 13, after obsessing over the leading ladies of jazz, he knew shortly after, in high school, that playing football wasn’t in the cards.

It took him quite a while to finally realize that selling ads for a magazine, while working in Seattle at age 27, wasn’t the life he dreamed about. 9/11 changed his life and direction when he went off to understudy Marc Kudisch in a touring company production, and very soon found himself on Broadway in “Thoroughly Modern Millie,” going on to appear in Altar Boyz and originating the leading role in “All Shook Up.” He’s appeared on television in 30 Rock, Glee, Ugly Betty and in film as well.

He’s got a real penchant for those Elvis songs, surprisingly sans undulating hips, but vocally rocking the King’s “Teddy Bear, “ “Can’t Help Falling in Love,” “Follow That Dream,” after opening with some great American Songbook classics “Stand By Me”, “A Foggy Day” that fell somewhat flat as a beginning.

Working with a master musical director at the piano, Willy Beaman, Mr. Jackson took on George Michael’s bluesy rock “Kissing a Fool” and shone brilliantly crooning “Falling Slowly” from Once with gut-wrenching knowing passion. “I Get Along/Don’t Get Around Much Anymore,” recorded with Michael Feinstein, was a highlight nice n’ easy, R & B arrangement.

He carries his baggage with pride, is emotionally engaging and performs with gusto, especially so on pop-rock contemporary songs like Lady Gaga’s “The Edge of Glory.”

His vocal style is a bit nasal, his range wide, flowing free from tenor to baritone, and his presence that of the all-American handsome male you’d expect to see on the cover of GQ. You’ll leave the Café Carlyle feeling you’ve got a new best friend who’s confided in just you! 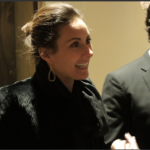 In the audience opening night, January 13th was one of his best friends – Laura Benanti.

Vancil Cooper on drums and Michael O’Brian on bass.