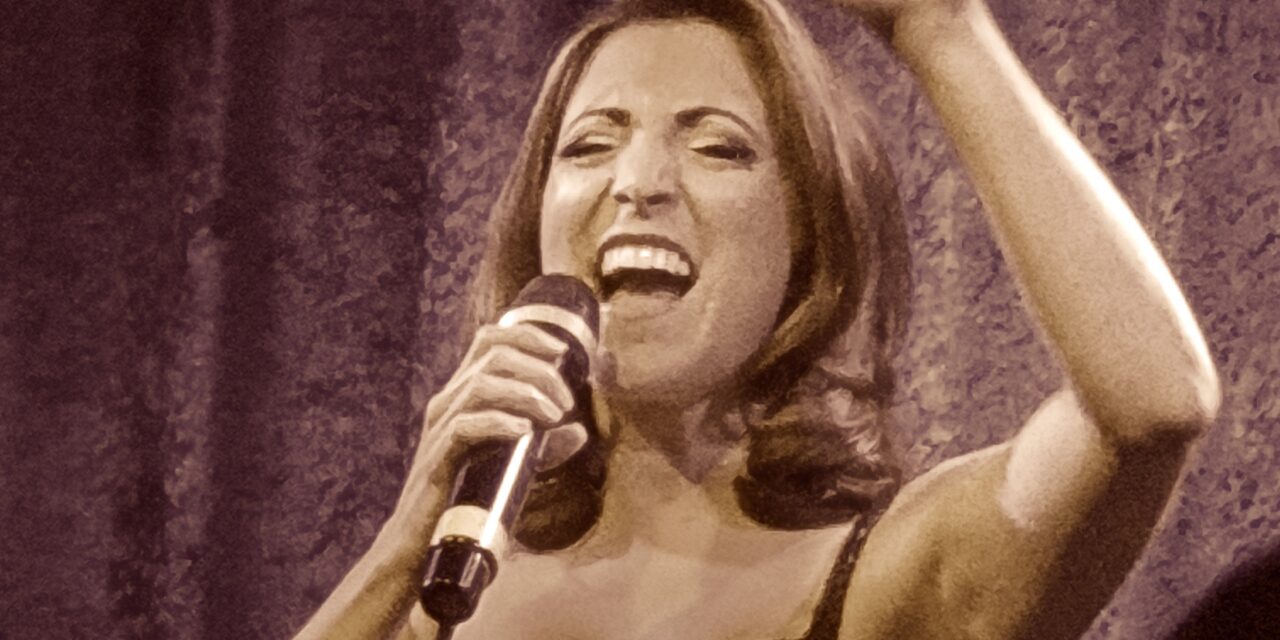 A great send-off! Remember those old Contadina Tomato Paste commercials?  “Eight great tomatoes in every jar!”  How can such enormous talent be crammed into just one little tomato?  Imagine the talents of Kristin Chenoweth, Marilyn Michaels, Julie Andrews and dozens more of the best performers of stage and screen, all inhabiting the deliciousness that is Christina Bianco, all of 4’11”, whose small but powerful mezzo voice reaches soprano and even coloratura notes.  Christina can instantly transform her voice and style into that of singers like Alanis Morrisette, Barbra Streisand or Liza Minnelli, often with great humor and some outright belly laughs.

Christina “made her bones” in this business of show starring in several iterations of the long-running, off-Broadway review Forbidden Broadway in London and New York.  There was, indeed, a lot to unpack here, as Christina, in her first New York show in several years, spent the pandemic creating online content for TikTok with her husband, Billy Ernst, and there was much to share with the sold-out Birdland audience.  The show was her farewell (for now) to New York, as they are moving to London for her 2022 UK tour of “Little Voice.”

“For this first chapter of the show, I’ll be just me,” said Christina.  With her impending London move, her first song, “Any Place I Hang My Hat Is Home” (Harold Arlen/Johnny Mercer) let us know she’ll be fine.  Sure, she could be Idina Menzel or Bernadette Peters, and at times you’d swear she was, but in “Nobody Else But Me” (Jerome Kern/Oscar Hammerstein), she declared, “I want to be no one but me.”  She quipped, “I’m gonna peak too soon with the Sammy Davis ending” at the big finish.

After a terrific duet with guest, the great Nicolas King, with a delightful counterpoint section on a medley of “I Wanna Be Seen With You” and “You’ll Never Get Away From Me,” the first of a number of songs composed by Jule Styne, and an homage to the even shorter Edith Piaf with just Brad Simmons’ sensitive piano playing, Christina’s next special guest, trumpeter Jeremy Miloszewicz, played a muted trumpet on “Cornet Man” from “Funny Girl,” a show in which Christina starred in the 2019 Paris revival, originally doing this number while dancing.  “I cannot tell you what a thrill it is to do this with full breath support!”  She was playful, sexy and joyous.

Now, having firmly established “Christina Bianco” as a musical force in her own right, she was ready for the “fun” part of the show, unpacking her pandemic TikTok material and showing off her formidable talents as a world-class impressionist.  Billy Ernst, more than a foot taller than his wife, came up for a solo song before joining Christina for a marvelous parody of a parody, “Wig in a Box.” Taking the original Saturday Night Live faux rap video “D*ck In a Box” and turning it on its head, Christina donned a series of wigs pulled out of a large box held by Billy, pivoting on a dime as she switched from one perfect impression to another.  She was apologetic for using some wigs more than once, as this was a live performance of an edited video.  There was no need.  It was delicious and thrilling.  She noted, “I think it’s safe to say that Chapter Two of the evening has begun!”

A whirlwind of impressions of various stars singing songs associated with other artists followed.  Having “Alanis Morissette” sing Kristin Chenoweth songs from “Wicked,” or Alanis doing Adele, was brilliant, funny and flawless, as was her take on a younger Liza Minnelli.  “I love that Billie Eyelash!”

In a segment devoted to television, Christina sang “duets” with Bernadette Peters, Cher and Bebe Neuwirth singing the theme to “Friends,” and the unlikely pair of Bette Midler and Barbara Walters taking on the theme to “Golden Girls.”  In rapid bursts of song and patter, she threw in another dozen or so killer impressions of performers such as Billie Eilish, Jennifer Aniston, and Drew Barrymore, and even characters, including “Moira Rose,” “Midge Maisel and “Karen Walker.”  Christina cleverly had Judy Garland and Barbra Streisand, who both starred in different version of “A Star is Born,” singing “Shallow,” Lady Gaga’s song from her recent incarnation of the film.

Her first encore song was the apropos “New York’s My Home,” from Gordon Jenkin’s “Manhattan Tower.”  With Brad acting as the chorus, calling out the names of various cities – “What about London?” – Christina left us with no doubt that, no matter how far or long her journey might be, New York is her home.

After a well-deserved and prolonged standing ovation, she gave her adoring fans a great send-off, with an emotionally beautiful “I’ll Be Seeing You” (Irving Kahal/Sammy Fain).  Yes you will, Christina, yes you will.