Christina Bianco & Brad Simmons The Long and the Short of It 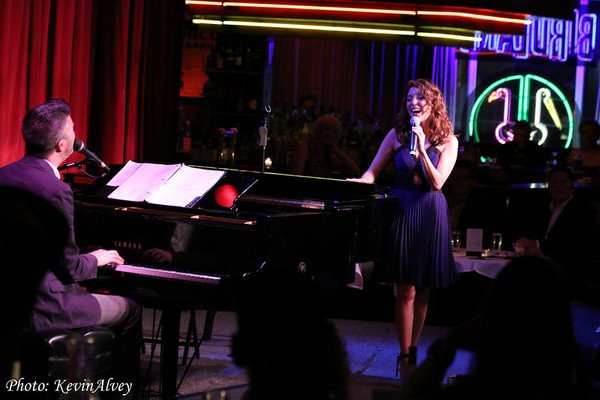 The Long and the Short of It “This song is so beautiful… so dramatic. Who could possibly ruin it?” Avid fans of Christina Bianco know it’s standard practice for the dynamic performer to deliver this line at any one of her acclaimed cabaret acts on the NY circuit. They, presumably, also know the question’s not asked in malice; “ruin” is a synonym for the good-natured skewering she gives a host of celebrities when she impersonates these notable names within a performance of a particular song.

These lovingly-executed send-ups have long been an integral part of Bianco’s regular shtick, so naturally, her latest bash, “The Long and the Short of It,” presented at Birdland Jazz Club as part of Jim Caruso’s popular “Broadway at Birdland” series, is chock-full of ‘em. But a word of warning to those who think that’s all they’re getting…. this ain’t your ordinary cabaret, and you should prepare to be sucker-punched and surprisingly moved in a way you’d never expect. Of course, there are the performers. For this act, Bianco enlists longtime friend and pianist, Brad Simmons, to serve as her accompanist for the evening. But despite what you may assume from viewing other cabaret performances, he’s not just your average “second banana” pianist accompanying his headliner. These two stand on equal ground, with the latter frequently joining the impressionist in song, and even taking a turn in the spotlight as a soloist.

To boot, their chemistry is fantastic; the pairing clearly extends beyond just the tongue-in-cheek sight gag to which the title alludes. Their banter, primarily centered around the differences in height, is wry, dry, and off-the-cuff; their natural rapport inviting and infectious. But while they’re steadfast in agreeing to disagree, they do acknowledge there are certain facets — both in life and within the production — which they have in common.

Lucky for us, one such element is the supremely superb set list, which impressively weaves somber ballads, peppy uplifters, and even a dollop of Disney amongst Bianco’s signature mimicry. Throw in a “test run” of her latest musical bit, an anecdote about “how she went viral” (“You can go to the clinic for that,” Simmons quips), and Simmons’ impromptu — but perfectly timed — underscore of “It’s a Small World” while Bianco laments the woes of being vertically challenged, and it exemplifies why these two simply can’t be beat.

And what more is there to be said of the indefatigable Bianco herself? Sure, there are quite a few digs at her diminutive stature, but there’s no question what she lacks in verticality, she makes up for in vocal prowess, delivering everything from classic Simon & Garfunkel to contemporary P!nk in tip-top vocal form. (Particularly notable is her delivery of Pinocchio’s “When You Wish Upon a Star,” especially in the context of recent events). Of course, she’s in deliciously fullest form once the impressions are unleashed, affecting Streisand, Peters, Spears, Aguilera and more pop-rock/musical theatre royalty to deliver some of Broadway’s best.

But then — and here’s the kicker — there’s the mood. Reflecting on the unfortunate onslaught of disasters that have plagued our world as of late, the performers opt to emphasize lightheartedness and laughter throughout the evening. While this thoughtful idea may seem trivial, it actually has a pretty profound effect on the proceedings. Much like pulling a blanket over a child’s eyes to keep out monsters, bad thoughts, etc., it fills the room with a hauntingly beautiful aura, creating a fascinating dichotomy between being painfully aware of the fact that people that are suffering, while being strangely at peace with the fact that you’re letting loose and celebrating. It really moved, and dare we say, united the room as a whole, coming together in story and song to this “haven” for the hour in change before we were thrust after all — as we’re consistently reminded throughout the course of the evening — “we’re not ever promised tomorrow.” Talk about an unexpected, enlightening twist!

It’s all the work of vivacious duo Bianco & Simmons, whose chemistry undeniably drives the success of the evening. They are, as they mention Hoda Kotb dubbed them, truly a “dream team” in every sense of the word. That’s the long and the short of it. Simple as that. No further questions asked.