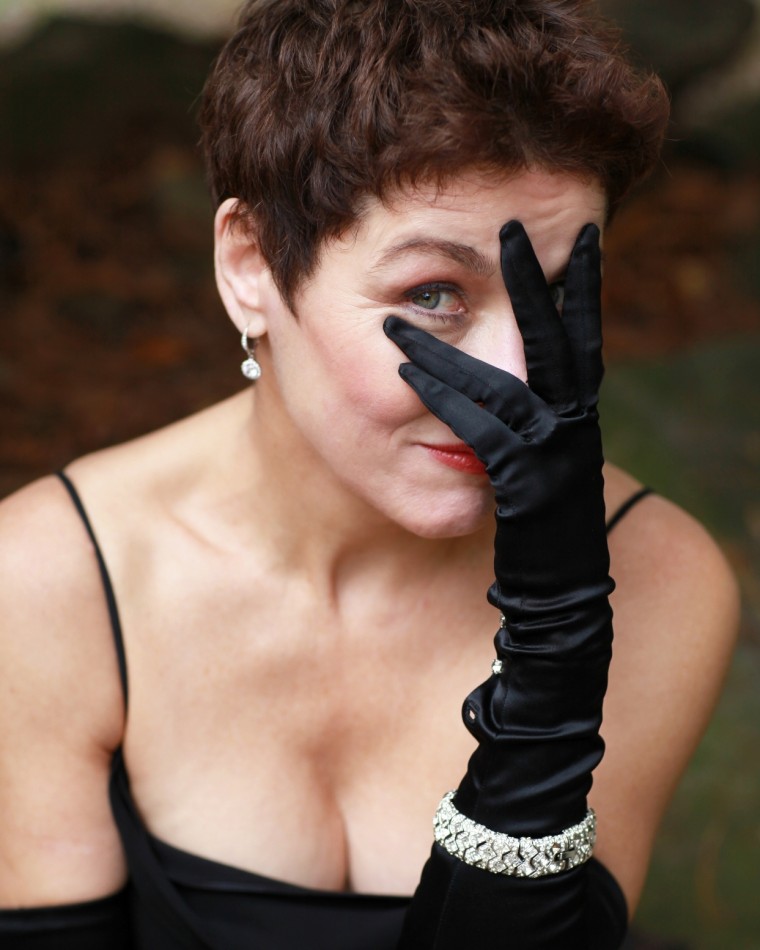 Christine Andreas takes a trip back to the days when a night on the town brought you from the Story Club to the Cotton Club, with swanky gowns, smoky rooms, swinging bands and a grab-bag of swellegant songs. The show tunes and pop music from the 1920’s “squeaking into the early ’60’s” are this country’s great contribution and remain favorites around the world.

In Café Society, Andreas has gathered a compendium of music by Duke Ellington, the Gershwins, Rodgers and Hart, all composers and lyricists with melodies that her thrilling soprano voice can soar into and with lyrics interpreted with passion and sentiment. She opens with the provocative rhythm of Irving Berlin’s 1929 film song, “Puttin’ On the Ritz.” Andreas delivers it like a breeze, each syllable a persuasive invitation to dress up and let’s go. With skilled acting talents, she understands the lyrics and tells the audience just what’s going on, and with whom.

With a career in theater, Andreas has met a host of performers and has learned tricks of the trade and insider anecdotes from veterans like Dina Merrill and Kitty Carlyle Hart. Hearing Hart’s stories of dating George Gershwin, leads Andreas into a whiz-bang caravan of Gershwin snippets, as bubbly as “S’Wonderful” to dreamy “Embraceable You,” and the eccentric “Fascinatin’ Rhythm.” She sang “How High the Moon,” by actress/lyricist Nancy Hamilton, Andreas’ dressing room-mate in the 1982 revival of On Your Toes, and composer Morgan Lewis. The song is still a jazz standard and was a landmark hit for Les Paul and Mary Ford, but Andreas sings it as a nostalgic ballad, ending in a minor key. She went from there to Duke Ellington’s lovely “In a Sentimental Mood,” her luscious voice swooping through the octaves.

Andreas’ intoxicating soprano reaches the heart and brain as well as the ears. With great comic flair, she gives a nod to what Julie Wilson called her “naughty songs.” She chooses “My Heart Belongs to Daddy,” a specialty tune Cole Porter wrote for Mary Martin but Andreas presents it as a salute to Julie. Perched on the piano, she focuses its mock innocence and sexy charm on her bassist, Dick Sarpala. On the other hand, she interprets with a keen insight Richard Rodgers’ and Lorenz Hart’s “Glad to Be Unhappy” and “There’s a Small Hotel” both reflecting undercurrents of loneliness. Kurt Weill’s song for his wife, Lotte Lenya, “My Ship,” is all wistful passion reflecting the pearls and gems of the lyrics. Andreas’ matchless phasing and breath control shine through “A Nightingale Sang in Berkeley Square” (Eric Maschwitz/Manning Sherwin) and Sammy Fain and Irving Kahal’s “I’ll Be Seeing You.”

During that same era, Andreas does not neglect Edith Piaf and brings the crowd to its feet with her heartbreaking portrayal of lost love, “L’Hymne à L’Amour” (Piaf and Marguerite Monnot. Andreas also remembers the Queen of Cabaret, Mabel Mercer, whose voice was failing but Mercer never failed to bring the heart of the song directly to the listener.

Like the Cole Porter song, Andreas’ evening of Café Society was a trip to the moon on gossamer wings — “Just One of Those Things.” It’s one of those nights that should be repeated.