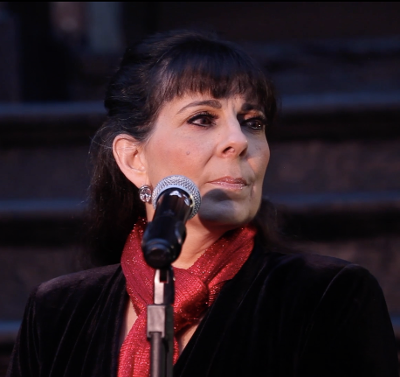 If there’s anyone we can count on for a little lighthearted levity at this tumultuous time, it’s Christine Pedi!! And fortunately for us, she made her grand return to the cabaret stage (ish) with an outdoor concert earlier in the month — complete with a pianist, waitstaff delivering libations, and a real, live audience!!

Sure, in the midst of a pandemic, some things are expectedly different. She’s traded the cozy and intimate Feinstein’s/54 Below for a spot on the sidewalk in front of Don’t Tell Mama (“I’ve never bowed on a stoop before,” she quips. “It seems counterintuitive!”). She’s swapped her usual doling out of Hershey’s kisses and candies with throwing alcohol wipes at patrons in masks. But overall, it’s the same Christine we know and love, skewering notable names in politics and pop culture like only she can!!

From Carol Channing to Patti LuPone, Fran Drescher to Dolly Parton, and even a small bit of Stewie from Family Guy, there’s quite a cast of characters; spurting impersonations at a mile-a-minute, she elicits laughs just as quickly. She knows what her audience wants, and, with the help of longtime pianist Matthew Martin Ward on the keys, she yuks it up with a smile, radiating equal parts warmth and verve with every note.

You can’t help but howl as Barbra Streisand croons “Frosty the Snowman” or as Melania details why “The Lady is a Trump.” She’s firing on all cylinders, with an uber-topical opening, courtesy of Joe Keenan, poking fun at the current upheaval of traditional Yuletide plans in light of the pandemic, while spinning The Grinch’s signature song into a dastardly ode to a certain White House resident.

And there’s simply nothing like “The 12 Divas of Christmas,” her spectacular, signature finale, which sees her dash through a dozen dames — one for each day of Christmas, as the song describes — before rapidly rattling them off, one by one. What’s more? When applicable, each dame’s line is delivered in an associative musical style; she sings Stritch a la “Ladies Who Lunch,” Merman’s verse is spiked with undertones of “I Got Rhythm,” Andrews gets a splash of “Le Jazz Hot,” and a deliciously purr-fect Eartha Kitt is sung in the style of (what else?!) “Santa Baby.” It’s truly a feat of impeccable elasticity, and Pedi keeps the crowd consistently captivated, not just with the impressions themselves, but in gleeful anticipation of what might possibly come next.

And yet, even with all the glitzy “bells and whistles,” hiding behind many characters and caricatures, sending up the best against the backdrop of the buzzy Midtown street at sunset, you’ll find she’s just as effective when she strips herself of all that and sings as Christine. She’s an actress, a comedienne, a top-notch impressionist… but she’s a person. And she’s living life just as we all are. She, like us all, has been hit hard by this thing, and hearing her sing from her heart is really touching and compelling and heartwarming.

In one of the more somber moments, with the preface that songs and lyrics take on new meaning based on where we are in life and time, she offers a tender Christmas Lullaby, reminding us to count our blessings despite our current circumstances, and appreciate how good we’ve got it in the midst of the mess. Equally poignant, among others, is a gut-wrenching fusion of “I’ll Be Home for Christmas” with the Menken and Ahrens ballad, “A Place Called Home,” emphasizing the value of companionship and having a landing ground in tough times — how some people yearn for it and how we shouldn’t take it for granted if we’ve got it.

“I didn’t want anyone to take any chances coming out tonight,” she tells the crowd, to that point, fighting back tears after another emotional number. “But we have to mark the season somehow, in some way. We have to do certain things to just remember that we can still go on in life.” Because after all, even in a year of such monumental change, “We’re still the same inside.” And in a world where, as she sings, “bad guys win / optimism’s wearing thin / and things are spinning out of control,” it’s okay — nay, imperative — to laugh.

And in watching her whip through her Rolodex of impressions, bouncing from one humorous number to the next, but still maintaining the heart, we realize that’s exactly what she’s doing. And it’s valued. It’s necessary. It’s — dare we say it — essential.

And it’s why, come rain, sleet, or that pesky, flaky white stuff, there’s truly no business like sh(n)ow business at all.

Christine Pedi’s Snow Bizness was performed live outside Don’t Tell Mama (343 W. 46th Street) on December 12th. The event can be viewed on demand through January 9, 2021. For tickets and more information, visit events.broadwayworld.com.