A Class Act of the First Order – T. Oliver Reid 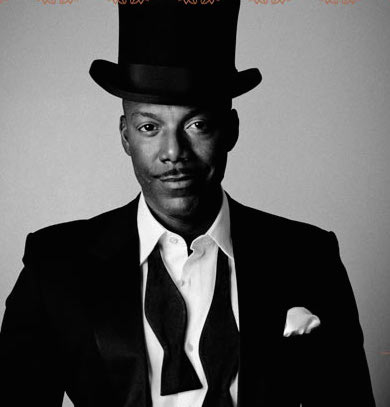 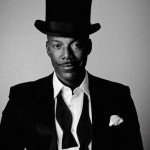 T. Oliver Reid is not only a sensational singer of significant songs; he’s a CLASS ACT!!!!! who deserves a larger font and even more exclamation points than I’ve given him. I first encountered his considerable talent when I was judging the 2010 Metrostar Contest preliminaries and after I heard him sing, I reduced all the scores I’d granted every previous performer and rated him considerably above everyone else. In case you haven’t heard, Reid won the contest, and rightly so, and in the years since then Reid has not only gotten better, he’s also gotten bolder.

In his current show at the Metropolitan room, his buttery voice, his spiffy top hat and tuxedo, his understated demeanor, his elegant deportment and his graceful dance moves take his audience back to the more cultured and formal but far sadder and more polarizing days of 1934, where they-were-called-Negroes, then performing in Harlem nightclubs, and were not permitted to join the all white audiences who drove uptown to hear great songs with poetic lyrics written by Black musical giants like Fats Waller, Duke Ellington, Billy Strayhorn, Andy Razof, Cab Calloway along with other songsmiths including Irving Mills, Harold Arlen, Ted Koehler and Yip Harburg, whose professional names were not the ones inscribed on their circumcision certificates.

I saw Reid’s current show, Drop Me Off in Harlem on Sunday night in Chelsea and I’d be happy to see Reid dropped off anywhere I could see and hear him forever. In a way, I’m sorry he’s not living in 1934 when there was not so much home competition for worthy entertainers. In those days Reid would have found a permanent perch, where people who love his style could always find him, like we could always find Bobby Short at the Carlyle. How about Marcus Samuelsson’s Red Rooster, a current Harlem hotspot on Malcolm X Blvd? FYI Malcolm X waited on tables at Small’s Paradise.

I’ve never seen Reid tickle the ivories, but thank God he doesn’t have to. His musical director, Laurence Yurman, Reid’s artistic soul mate and equal, displays enough keyboard wizardry for 200 hands. The whole band is good, but Yurman is really exceptional. Listening to Yurman’s shimmering, sensuous arrangements makes you want to climb under the table and commit unspeakable acts. Unfortunately, my usual Cabaret companion was home watching bare-armed bruisers in helmets give each other concussions.

Reid’s menu of 29 songs was select and beautifully grouped into medleys with enough Fats Waller/Andy Razof tunes to satisfy even the likes of a major fan like me. The songs run the gamut from happy, happy, happy up-tempo dancey swing numbers – Ted Koehler and Harold Arlen’s As Long As I Live and Fats Waller and Andy Razaf’s Ain’t You Glad — to the right kinds of blues — Duke Ellington and Irving Mills’ Mood Indigo and the always heart wrenching Fats Waller and Andy Razaf social commentary Black and Blue — to sexy double entendre numbers like Alexander Hill and Andy Razaf’s If I Can’t sell it, I Ain’t Gonna Give it Away, and even a well chosen closing spiritual like Get On Board, Little Children.

Reid also supplies a concise history of the Harlem nightspots up and running in the year 1934. Mobster Owney Madden’s Cotton Club may have been the most famous and swanky with a doorman beneath a marquee greeting customers in ermine wraps as they stepped out of limousines and into the club where they drank Madden’s bootleg beer and, if they had any taste buds, stayed away from the fancy stuff on the menu and stuck with home-style vittles like fried chicken and barbecued ribs, while they reveled in two hour floor shows with gorgeous, sepia-skinned showgirls, tuxedoed musicians and big stars like Ethel Waters, Cab Calloway and Duke Ellington.

Connie’s Inn was owned by Conrad Immerman in partnership with his brothers who all dabbled in pastrami before making their fortunes from bootleg hooch. Their big acts were Louis Armstrong, Fats Waller, Peg Leg Bates and Fletcher Henderson. Regular whites-only patrons included heiress Gertrude Vanderbilt.

Small’s Paradise, the third of the top Harlem Trio, also featured a big band and floorshows, served Chinese food along with bootleg liquor and could accommodate 1500 patrons at small tables in a large basement room. Small’s was special because it was integrated, drawing an audience of local and visiting Blacks as well as Whites who took the A Train. After hours, musicians from Harlem and downtown Whites stopped by to jam and Small’s Sunday night sessions became legendary.