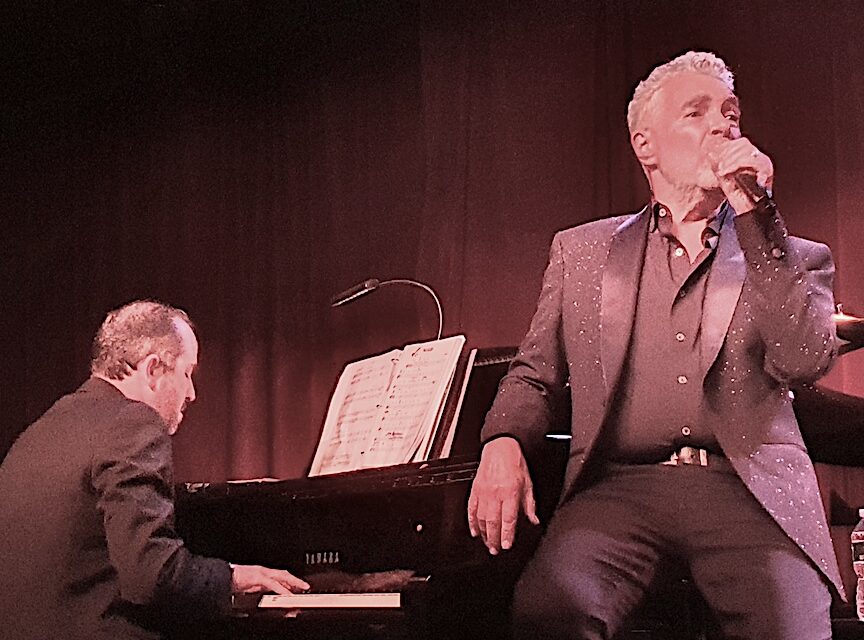 On Monday, September 27, Clint Holmes returned to Birdland for the first time since “The Pause” of 2020, with a number of jazz and cabaret stars present in the audience, a measure of the respect Holmes garners from his peers.  Lean and fit at 75, with a full shock of post-pandemic gray hair that contrasted well with his all-black outfit, Holmes brings an almost ferocious intensity to his performances that is quite the workout.  He “plays” the microphone and even the air with his fingers as if there’s an invisible clarinet, at times using his entire body to wring every last drop from his vocals.

In his opening number, Stevie Wonder’s “I Wish,” Holmes implored, “I wish those days would come back once more.”  Here, they were.  Holmes traded scats with guest trumpet player Dominick Farinacci for Ray Charles’ “I Got A Woman.” Holmes sang, “Are you the definition of insanity, or am I?” on the Finneas ballad “Break My Heart Again,” in a slower tempo than even the original.  The heartbreak of the lyrics becomes palpable in Holmes’ interpretation.

Holmes created a powerful story in a medley of the Cyndi Lauper hit “True Colors” (Billy Steinberg/Tom Kelly/Cyndi Lauper), “Over the Rainbow” (Harold Arlen/Yip Harburg) and “Goodbye Yellow Brick Road” (Elton John/Bernie Taupin).  He commanded the audience’s rapt attention, slowing the song to a speaking tempo, with Holmes fully articulating every word of the occasionally inscrutable lyrics of Elton John’s record.  “Back to the howling old owl in the woods, hunting the horny back toad,” he sang with more intensity and feeling than this classic pop song might suggest. At times, Holmes used the most angelic, sweet part of his still-supple voice, shifting gears to its soaring, powerful climax.

Another guest, Gabrielle Stravelli, enchanted with a medley of “Pure Imagination” (Leslie Bricusse/Anthony Newley) and “Imagine” (John Lennon), along with Farnacci on the trumpet.  When Holmes returned to the stage, he sang an improvised line to Stravelli, playing on “pure” and “imagination,” and she gamely returned an obligato response.  These unplanned two minutes were a delightful Easter Egg for this set.

On “The Nearness of You” (Hoagy Carmichael/Ned Washington/Dick Nash), Holmes sang with only Christian Tamburr, now on vibes.  Tamburr played with a deft touch, creating something of a celestial feel, with an almost ethereal ringing sound.

Holmes dedicated a pair of songs to his wife and father, respectively.  “If Not Now, When?”, written after his cancer surgery 15 years ago, which he wrote in 20 minutes, “was waiting to be written.”  His “Hallelujah” (Leonard Cohen) gave new life to one of the most covered songs in popular music.

The finale of “Alright, Okay, You Win” (Sid Wyche/Mayme Watts), with the full band, Farinacci and Stravelli, was a terrific closer.  The call-and-response scatting of Holmes and Gabrielle was spectacular. www.birdlandjazz.com