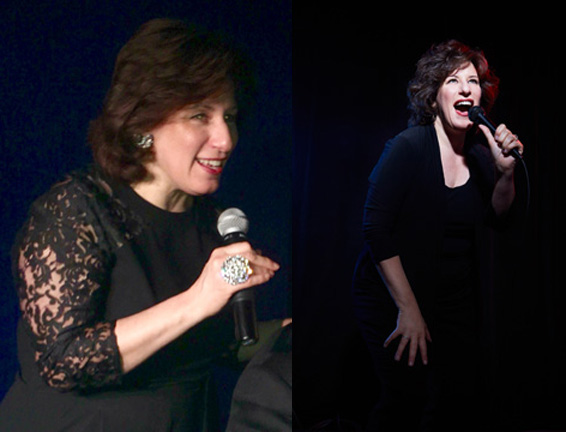 If a layman knows the name Harold Arlen, he probably associates it with “Over the Rainbow” (from The Wizard of Oz) which was voted the twentieth century’s No. 1 song by the Recording Industry Association of America (RIAA) and the National Endowment for the Arts (NEA). The prolific composer also penned 11 musicals, 24 films, and over 500 songs, many of which shine out from the American Songbook cannon.

“A Sleepin’Bee” (the bee is conjured and peeked at in the singer’s gently clasped hands) emerges like unrolled bolts of chiffon. Love hurts. Every word’s believable. (Truman Capote from 1954’s House of Flowers)

Lena Horne performed the calypso parody “Napoleon” (E.Y. Harburg) in the 1957 musical Jamaica: Napoleon’s a pastry/Bismarck is a herring/Alexander’s a crème de cacao mixed with rum/And Herbie Hoover is a vacuum…(‘point being everything becomes a commercial or a fad) The artist ends this one with: Someday Trump will only be a winning hand a cards! Her style? Sheer hipster. One of the evening’s highlights is an imaginative interweaving of “Dissertation on the State of Bliss” (Ira Gershwin), “Moanin’ in the Morning,” and “Down With Love” (E.Y. Harburg). In vocal duet with Cook, this beautifully staged number finds Sanges leaning on the piano, chin on fist or glaring at him. She looks annoyed and bored. He looks-elsewhere. Lyrics dance, part, and mesh. A scene in one.

Three songs with weather themes “a barometer for the state of the heart,” Sanges observes, include “Ill Wind,” “Stormy Weather,” and “When the Sun Comes Out.” (Ted Koehler). The vocalist threads between her musicians bending forward here, touching a chair there, slightly turning, underlining collaboration; a heady visual. The first song is a sirocco, all heat, hush and bowed bass. During the second, breath intake has the affect of words. The third erupts like a geyser. Just close your eyes and let it soak you. Songs about getting happy bounce along together like old friends. Sanges’ arm shoots up with: The sun is shinin’ common’ get happy and forward to us-palm out with: the Lord is waitin’ to take your hand…Small gestures are meaningful for lack of excess. (“Get Happy” with Ted Koehler).

An all but unknown encore number, “Little Drops of Rain,” is from a 1962 animated feature called Gay Purr-ee – with cats. (E.Y. Harburg). Sanges tells us Judy Garland often substituted the song for the endlessly requested “Over the Rainbow.” As rendered, it’s completely lovely, as tender as it gets.

Jeff Harnar’s terrific Direction draws us in and keeps us with the artist throughout. The stage is employed with aesthetics and variety, movement is evocative, gestures well chosen. Sanges comes across as her authentic self.

Caveats: A disjointed “I’ve Got the World On A String” attempts actual Gershwin music and Gershwin influenced Arlen music with Ted Koehler lyrics. Insufficient use is made of the swell Steve Smyth.