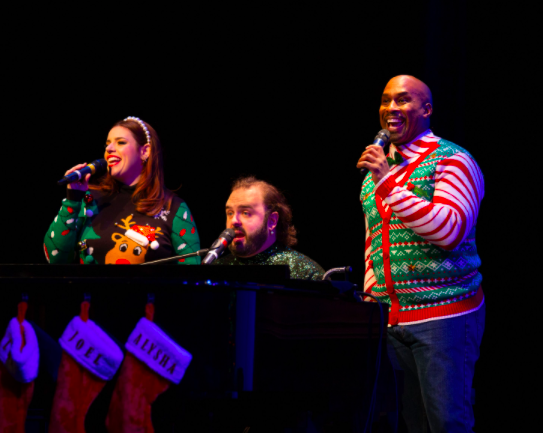 If you’d like to experience a more traditional Christmas holiday season, enjoy Clint Edwards Music – uninterrupted. Clint is a one of today’s major forces as a composer and sought after musical director/arranger. And he offers many year-round musical programs about the Great American Songbook. www.clintedwardsmusic.com

Barrington Stage Company (BSC), the award-winning theatre in Pittsfield, MA. in the heart of the Berkshires, and under the leadership of Founder/Artistic Director Julianne Boyd, will present BSC’s Holiday Getaway, a virtual concert starring Alan H. Green (BSC’s The Hills Are Alive with Rodgers & Hammerstein, Broadway’s School of Rock), Alysha Umphress (BSC’s The Hills Are Alive with Rodgers & Hammerstein; Broadway/BSC’s On the Town) and Joel Waggoner (Composer: BSC’s Presto Change-O; Performer: Broadway’s School of Rock). The concert will be filmed in advance at BSC’s Boyd-Quinson Mainstage and will be streamed from Friday, December 18 at 7:30 pm ET through Wednesday, December 23 at 7:30 pm ET. BSC’s Holiday Getaway will be available for a donation of $25 or more at the following link on Ovation Tix.

Audra McDonald concert via www.NYcitycenter.org has been extended thru January 3. An hour of classic songs from Broadway’s Golden Age!

Out of the Box Theatrics (OOTB) (Elizabeth Flemming, Founder and Producing Artistic Director; Ethan Paulini, Associate Artistic Director) announce its 2021 Season, including the previously announced virtual production of The Last Five Years and the long-awaited return of the company’s site-specific production of Baby, as well as a virtual benefit for Black History Month, a residency in partnership with New Hampshire’s Weathervane Theatre, and a new work festival. VIRTUAL BENEFIT
Tuesday, February 2, 2021 at 7:30 PM www.ootbtheatrics.com

The Broadway community seeks new financial outlets during this shutdown –

Robert Fairchild launched a floral arrangement company –  Boo.kay out of his 4th floor walk-up on the Upper West Side.

The 76th Theatre World Awards will be postponed until Live Theater returns in 2021/2022.

Now’s your chance to bid on costumes worn by Hugh Jackman, Bernadette Peters and many others in a Holiday Auction Benefit thru the Costume Industry Coalition and the FIT Foundation. There will be two installments of the benefit. The first items are already available to bid on through December 21. They include the shoes Bernadette Peters‘ wore in Into the Woods, Erika Henningsen‘s shirt and Barrett Wilbert Weed‘s hand-painted denim jacket from Mean Girls, Laura Osnes‘ shoes from Cinderella, Jenn Colella‘s captain’s jacket and hat from Come From Away, Laura Bell Bundy’s Juicy Couture pink velour tracksuit from Legally Blonde and more.

Theater fans can begin bidding on the second installment on December 18 and continue through December 28. These items include Hugh Jackman‘s pineapple shirt from The Boy from Oz, Bob Mackie’s framed, signed costume sketches and cast photo from The Cher Show, Bernadette Peters’ coat from Gypsy and more. Head here to see the items.

A Virtual Telethon to save one of cabaret’s most treasured locations WEST BANK CAFÉ. There will be a free stream beginning at noon on December 25 www.savewestbankcafe.com They need to pay rent and monthly bills. Go HERE to this GoFundMe page. The Telethon will feature many wonderful talents including Betty Buckley, Debra Messing, Martha Plimpton, Alice Ripley, Joe Iconic, Lewis Black, Telly Leung, Nick Adams, Dylan Baker and many more.

The Brill Building, with its beautiful Art Deco facade at 1619 Broadway, originally constructed around 1931 and designated a landmark in 2010 will undergo renovation and hopefully maintain the historical integrity of the Brill.

Harry Potter and the Cursed Child is scheduled to return to the Princess Theatre in Sydney, Au. On February 25.