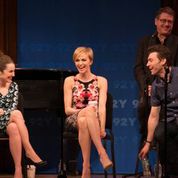 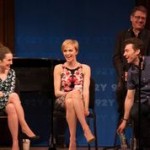 A Killer New Musical: A Conversation with the Team Behind A Gentleman’s Guide to Love and Murder 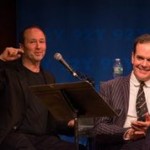 It was late at night. Steven Lutvak, in bed but still awake, turned on his television set, and came across the Alec Guinness movie, Kind Hearts and Coronets. “I sat bolt upright,” Steven recalls. “I smote my forehead – I was always dramatic! I said, ‘Oh, my god, it’s a musical!’ That was eleven years ago. It feels like 400!”

At the time, Steven, a theater musician and lyricist, was developing a show with Robert L. Friedman, theater book writer and fellow lyricist. Says Steven: “I thought he would be the perfect collaborator. I got the rights to the movie, and we moved forward.” 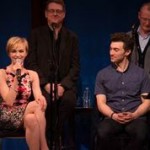 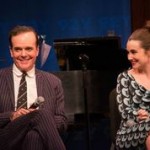 Their project: Broadway’s new smash-hit musical, A Gentleman’s Guide to Love and Murder. Opening at the Walter Kerr Theater in November, 2013, it has already won Outer Critics Circle Awards for Outstanding New Broadway Musical, Outstanding Book of a Musical, and Outstanding Actor and Outstanding Director of a Musical; a Drama League Award for Distinguished Production of a Musical; and Tony and Drama Desk nominations in more than 20 categories, including a Tony nomination for Best Musical.

The show was the subject of a special one-time evening, this May, in the Lyrics and Lyricists series of the 92nd Street Y. Titled “A Killer New Musical: A Conversation with the Team Behind A Gentleman’s Guide to Love and Murder, the event was moderated by theater reviewer David Cote. Included were insights and comments by Steven, Robert and the show’s director, Darko Tresnjak, with entertaining thoughts and performances by cast members Jefferson Mays, Bryce Pinkham, Lisa O’Hare and Lauren Worsham.

David’s first question was the classic, “What comes first: the words or music?” Robert’s fast reply: “The food comes first! But once that’s out of the way, we try to determine what will serve the dramatic moment. Then we try to establish what style of song will do that best. We try to come up with a hook: perhaps the first line of a song, or what winds up being its title. Steven may hear something in his head and run to the piano. Or he may say, ‘Go home — I’ll call you when I’m ready!’ At some point, we’ll sit and write the lyric together.”

The style of their collaboration was clear: “If there’s something in our writing that one of us objects to,” noted Robert, “the other never objects to the objection. ‘Okay,’ we’ll agree, ‘let’s come up with something else.’ We trust each other within our work.”

As the writing moved forward and the show began to take shape, director Darko Tresnjak joined the team. The question soon arose as to who could play the eight D’Ysquith family members who were to be eliminated in Monty Navarro’s murderous march to his inheritance. Darko recalled working with Jefferson Mays, a dramatic actor, in a production of Rosencranz and Guildenstern Are Dead. Darko proposed him. Said Steven: “My first question at the time was, ‘Does he sing?’ Darko spoke of his Jefferson’s credentials. My second question was ‘Does he sing?’ My third question … well, the first time he came to my house and performed, I knew!”

Others joined the cast-in-the making. “We were so blessed by the community of actors in New York,” commented Robert, “the unsung heroes who do the readings, the presentations, the demos. They don’t all make it to Broadway. Sometimes they age out of a role, or there are circumstances beyond everyone’s control. We are greatly in their debt.”

Lisa O’Hare, who plays Sibella, commented on her character. “It was a fun challenge. I had to defend her, because she was misunderstood. I had to convince people that she was more than just a social climber — even though she is! But she’s lots of other things too.”

Bryce Pinkham, playing Monty, was one of the last actors to audition and to join the cast. Recalled Steven: “By that point, 1800 men had played this part. So did Robert and I, as we developed the show. But there were things that Bryce did in that first audition that I had never thought of and that were exciting to me. And I thought, that’s a really creative mind!”

Bryce took several ideas for his role from what the director and cast had already worked out. “Okay,” he recalled thinking, “so that’s what we’re doing at this moment.” A more important clue to his approach came from the set. “I remember looking at it,” he says, “at the footlights on the toy stage, the stage within the theater stage. I could see that Monty is putting on a show for the audience, re-living this memoir as he goes through it.”

Creativity was also part of Jefferson May’s arsenal, as he wondered, when he was cast, how he was going to play the eight different members of the D’Ysquith clan. His solution: hats. “I have a hat fetish, with a large collection at home,” he told the 92Y audience. “I could hear my characters’ voices; I could see them emerging from the mist! I thought: I’ll just give each of them a hat! And, as it turned out, I had appropriate hats for every one of them! Unlike some actors who work from the inside out, I work from the outside … out!”

During the creation of A Gentleman’s Guide, a legal snag occurred: Steven and Robert were unsuccessful in obtaining the stage rights for the movie’s well-known title, Kind Hearts and Coronets. “So,” said Robert, “we went back to the book the film had been based on.” It was Roy Horniman’s 1907 novel, Israel Rank: The Autobiography of a Criminal. “We divested all vestiges of the movie, including what had been just in the film and not in the novel. We came to realize how that freed us to invent our own show.”

The 92Y evening was enriched by several songs from the show, performed by cast members Lauren, Lisa, Jefferson, Bryce – and by Steven. Among the numbers: four variations of “Poison in My Pocket,” sung by Monty’s character as he contemplates how he will murder the next D’Ysquith. The song originally sang of planning an “accident” to the intended victim’s automobile; the next version centered on damaging D’Ysquith’s rowboat while he was out on the lake; the next, an unfortunate accident to a ferris wheel in which he was riding, and – in the final version — enticing the victim onto thin ice. With Steven performing all four versions, the Y evening marked the first time all four sets of lyrics had been presented together.

David Cote, as moderator, asked the cast to talk about their favorite moment in the show. Said Jefferson: “At the end, my show is over, and I’m lying in a supine position behind the pediment at the top of the toy proscenium arch. I’m listening to these glorious voices sing this lovely music, and I just breathe it in. It’s an intoxicating moment every night.”

Darko looked to the future: “I don’t know what is going to be so much fun to stage, ever – when I’m going to have such a nice challenge again!”