Corinna Sowers Adler and Friends at the Appel Room 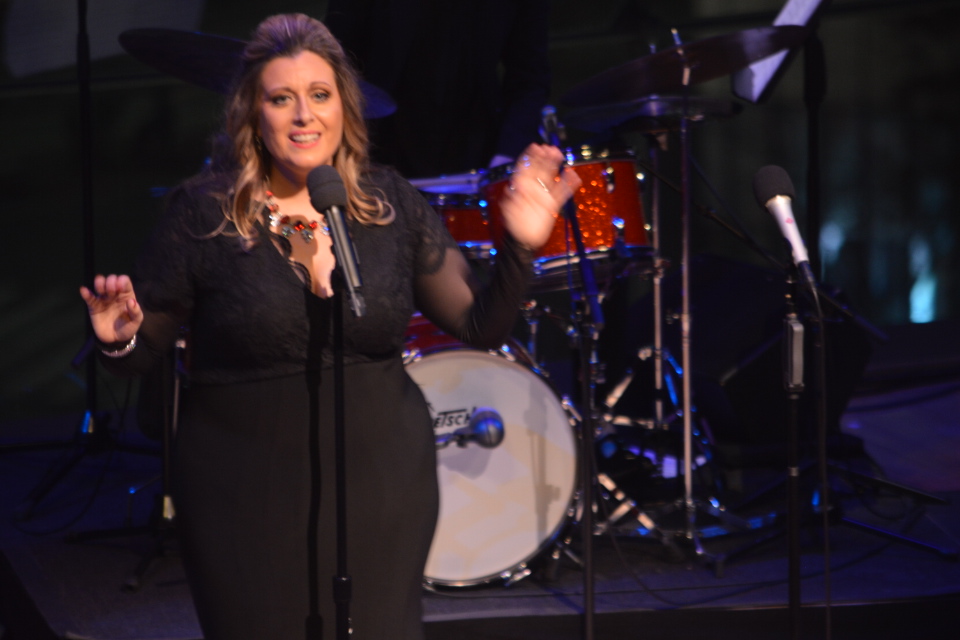 Corinna Sowers Adler is a picture of generosity in spirit, gesture, physique, instinct, and breadth of song selection. On a November Saturday in the gorgeous Appel Room at Jazz and Lincoln Center she helped us face down our looming national election with the joyous noise of three smashing musicians (Lawrence Yurman on piano, Christian Fabian on bass, and Colleen Clark on the drums), twelve of her young singing students, the show-stopping Broadway star T. Oliver Reid, and even a modern dancer. Between tunes, Adler acknowledges colleagues in the audience ranging from cabaret impresarios and press folks to performers. She was, by her own design, never alone on the stage. Adler convenes with power, and her warmth is contagious. Music Over Manhattan: Something Beautiful presented by Studio Senakwami was a blending of many talents, more a night at the Grand Old Opry or Ed Sullivan’s Sunday evening television show, comprised of a mix of acts and voices and instruments, than a pure and singularly-focused cabaret concert pursuing closely tailored song themes. When Adler sang alone, sometimes at the far reaches of her reedy soprano, the performance power ebbed considerably, but when all the pieces came together in duets and trios and ensemble presentations, they were potent.

Adler performed Carol King’s “Beautiful” near the top of her set, accompanied by her three stalwart musicians she immediately introduced, underscoring the theme of the night: she opened her arms wide and invited additional talents in. Adler soloed “When Autumn Comes” (Frank Wildhorn) with a gentle light soprano with a gruff edge, recalling Meryl Streep’s performance of “I’m Checking Out (of this Heartbreak Hotel)” at the end of Postcards from the Edge. Her band’s full jazz backbeat was on display with a fun easy swingy version of Billy Joel’s “New York State of Mind.” And late in the evening she delivered a graceful “Children Will Listen” (Stephen Sondheim) that recalled Streisand’s selection of that tune for the first Clinton presidential inaugural concert, mixing her teacher’s heart with the power of community and enveloping politics. Adler’s solo charms paled in comparison to the ensembles she brought together. Two of her female students joined her in a delicious close harmony version of Mary Chapin Carpenter’s “Why Walk When You Can Fly,” suggesting a rockabilly country twang sentiment that fit her vocals and easy charm. Solo artist T. Oliver Reid joined Adler for a delicate duet on “Everywhere That You Are” (Benj Pasek and Justin Paul) from James and the Giant Peach, then Reid stopped the show with a solo “Isn’t It Romantic” (Rodgers and Hart), fitting the room and the view and the essence of cabaret to perfection.

Adler sent us out with a nod to (and a call to vote) in the looming election, suggesting love not despair, hope and dreams rather than hate, with Stephen Schwartz’s call-to-arms and possibility “Defying Gravity.” Adler and her twelve students raised their voices, stared down the future, and invited us along.