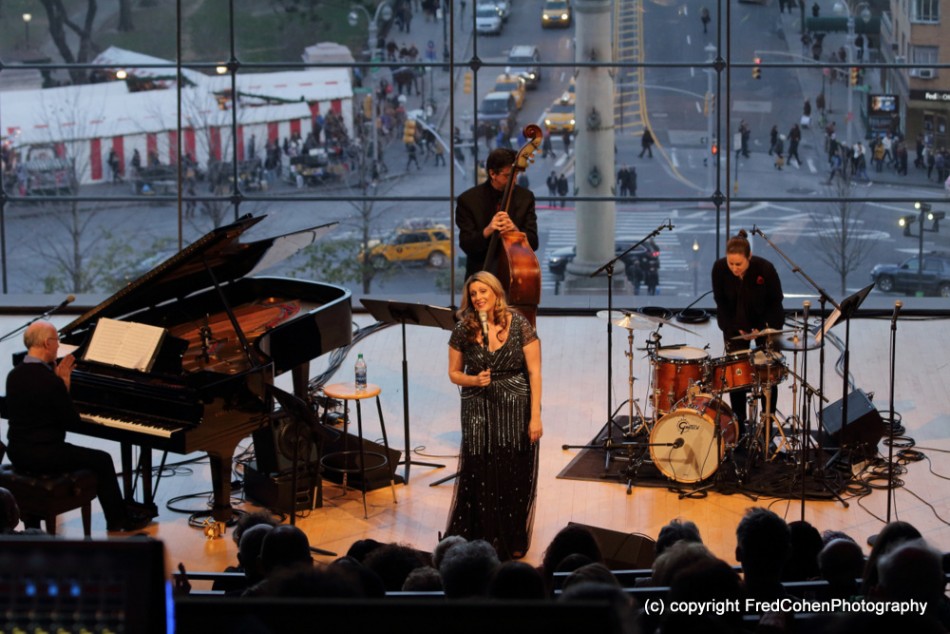 Wow! Everything else that follows is exegesis. I attended Adler’s Saturday evening show, High Standards, at the Metropolitan Room; this was my first exposure to Adler. I then attended Adler’s show in the Appel Room of Jazz at Lincoln Center the following afternoon. The former setting is an intimate and classical café environment; the latter is a shiny, grand and contemporary venue. The programs differed in appropriate ways; holiday songs were added, comedic songs were excised – but the level of performance remained exceptional. 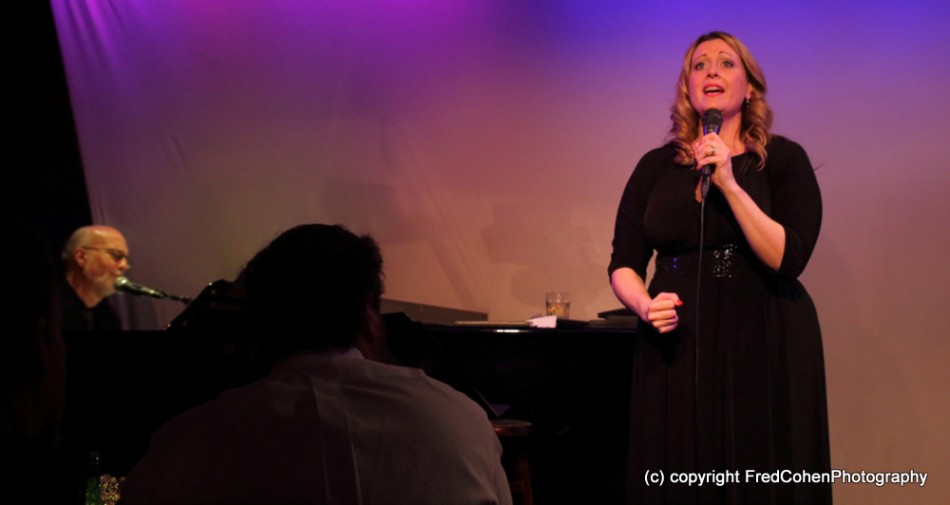 In both case,s it was clear that Adler is a professional in every sense apparent to an audience – the instrument (a meaty soprano with a bell-like clarity), the audience rapport, the humor, the program, the pitch and the performance, each intonation and gesture, is “right.” This is a singer in whose hands you feel secure. There can be a great and winning charm to rough edges in cabaret – but that is not the appeal here; here there is comfort and confidence in a sure and practiced hand. 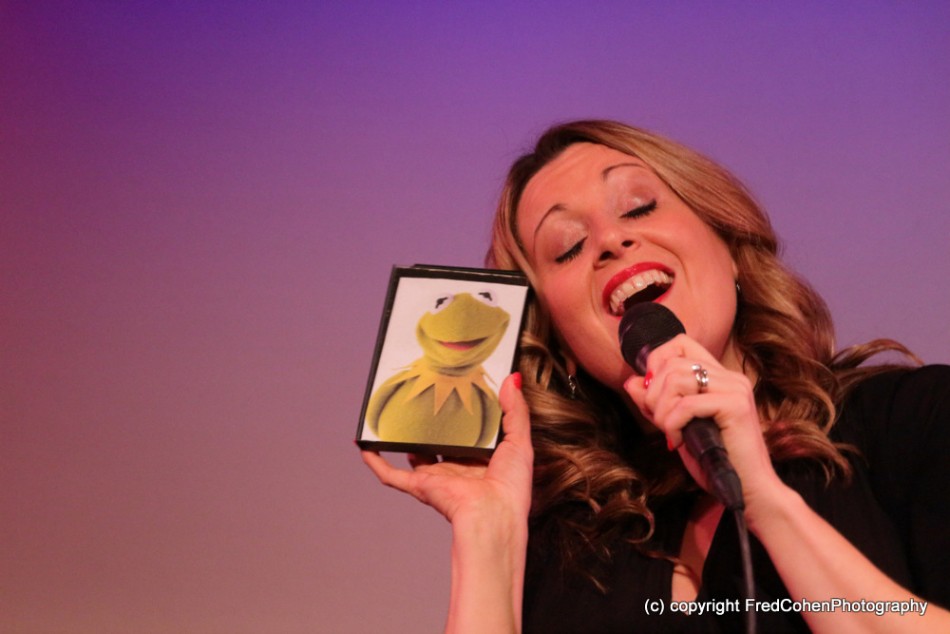 Adler entered the earlier show singing “All the Things You Are” (Kern/Hammerstein), not an excerpt or a hurried line, but a paced and loving rendition, while strolling among the café tables – before introducing herself from the stage. Nothing about the show is rushed; and nothing drags. The patter is generous and often self-deprecating: How do you put the sparkle in a soprano’s eye? Shine a flashlight in her ear. The spontaneous patter was equally funny, and remarkably quick. The musical material, too, provided an outlet for Adler’s humor: Victor Herbert’s “Art is Calling for Me” and Rodgers and Hart’s “To Keep My Love Alive” had the audience roaring. And she added a bit of sizzle to the laughter with Comden and Green’s “I Can Cook Too.”  These pieces were omitted from the Lincoln Center show where the humor might have been lost in the relatively cavernous space and with a multi-generational audience.

Many people find they cannot listen at length to a soprano; the voice tends to grow grating and stressful. That is not the case with Adler; she has a strong lower register, in frequent use. She articu­lates every word. She has a broad range, vocally and emotionally, throughout the show – delivering varied material (e.g., Billy Joel, Joni Mitchell, Stephen Sondheim, Kern & Hammerstein, Rodgers & Hart, John Lennon). There was no sign of audience impatience at any time; indeed, to the contrary. 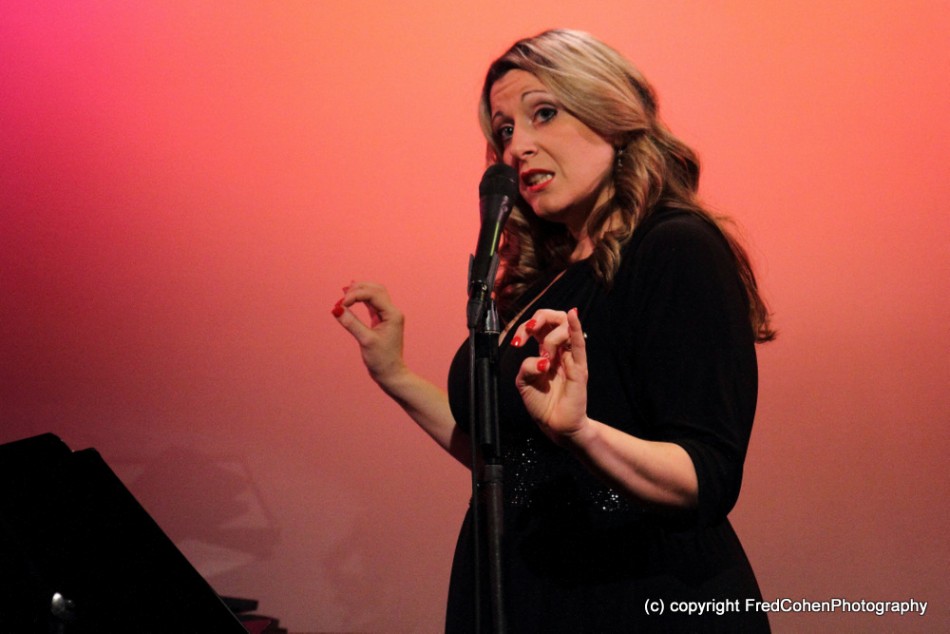 It was five songs into the Met Room show before Adler expressly invoked Barbara Cook as a role model; it took me about 1-1/2 songs to do the same. I have heard no contemporary singer who more readily evokes such comparison, and Adler does not come off a poor second but as an alternative. Young people who bemoan the inevitable loss of range and pitch control that come with advancing age of even the most iconic singers (e.g., Mabel Mercer and Frank Sinatra were popular entertainers well after they ceased to be impressive singers – on personal experience), saddened to have missed the prime of Ms. Cook, can take significant solace listening to Adler.

Adler is classically trained, but also experienced in musical theater. She has been singing since her pre-teen years and still studies voice – currently with James Carson. (And Adler, in turn, teaches voice, taking obvious pleasure in her students.) At the Met Room, Adler performed a wonderful “New York Medley,” joined in parts by her momentary musical director Larry Yurman. In the Appel Room, the medley was performed with five of Adler’s young, charming and talented students: Kevin W. Bergen, Grace Carlin, Zoe Gelman, Gerry Mastrolia, and Talia Wynzel, ably backed by Ritt Henn on bass and Colleen Clark on drums. 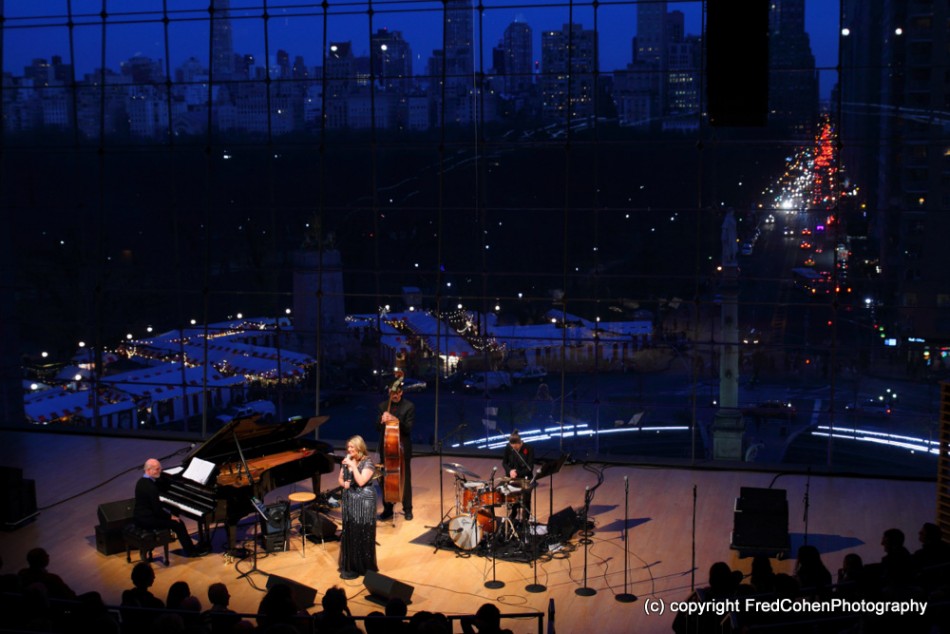 Toward the shows’ finales, Adler graciously thanked the audience, administrative personnel, personal staff and, at the Appel room, recognized musical luminaries in her audience; she also thanked her husband and manager, Nick Adler. (The Adlers have been married for 14 years, having met in the Wilke’s University theater. Nick had a theatrical role in which he was to kiss Corinna’s hand and wrist and work his way up the arm; he did not know when to stop.)

In both performances Adler was delightfully accompanied not by the earlier-scheduled (and excellent) Alex Rybek but by a late stand-in, Larry Yurman. Yurman not only seamlessly provided rich and adept accompaniment, but (as noted above, in the Met Room performance) some deft and challenging duet accompaniment (in the New York Medley), and filled the role of straight man as well.

Fred Cohen is a New York-based photographer and reviewer; you can see more of his cabaret photography here.