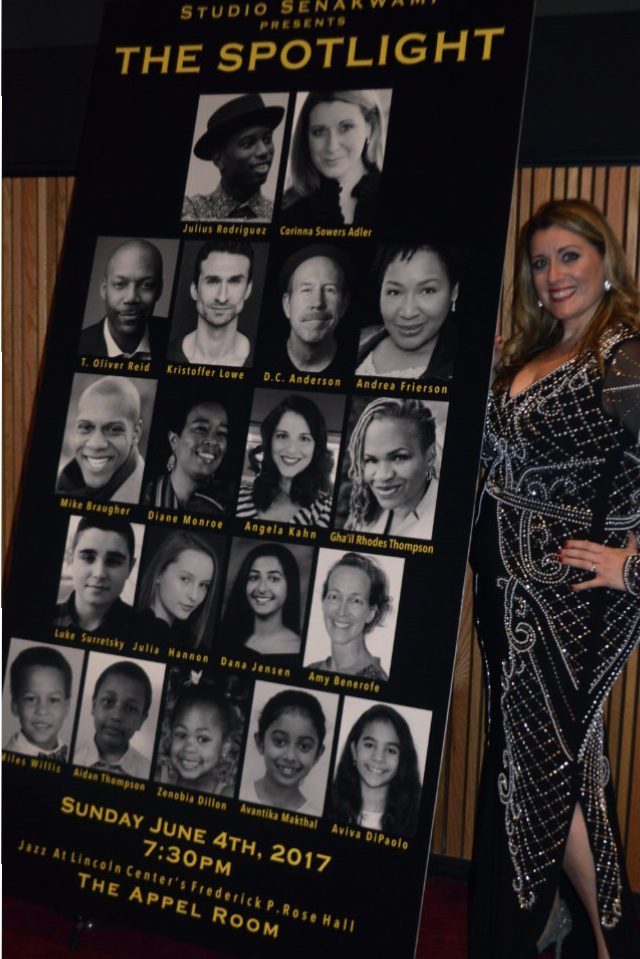 On an unusually damp Sunday evening of June 4, Studio Senakwami presented The Spotlight at the Appel Room of Frederick P. Rose Hall, hosted by three time Excellence in Theatre Education Tony Award nominee, Corinna Sowers Adler. Reminiscent of a luxurious Greek Amphitheater, the performers seemed to be free floating in mid-air—suspended in time against the breathtaking backdrop of an emerald green Central Park and the infinite Manhattan Skyline, while the audience hovered above the stage, engaged as surreal spectators. The Spotlight, an acclaimed Studio Senakwami production, returned to Jazz at Lincoln Center, featuring eclectically diverse performances from young emerging musicians and performers as well as seasoned artists. The noble mission of Studio Senakwami is to crack open the iron-clad doors in seeking out performance opportunities for artists/musicians and to cultivate young struggling musicians dedicated to their professional goals in an effort to remain steadfast in their aspirations of a musical vocation. Corinna Sowers Adler  gracefully announced the line-up of performers and musicians while hitting those high notes in her own musical renditions. She even took a crack at making the audience laugh with a few carefully crafted apropos jokes, fashioning a most enjoyable velvet night of jazz, musical theater, classical music repertoires with the aim of nurturing the most vital aspect of our future lives—the harnessing of talented children as they reach for the stars, enveloped in the glory of youth and anticipation. The student vocalists and musicians performed a medley of recognizable musical scores while the spectators overwhelmed by these courageous youngsters, gasped in admiration of a plethora of talent. This enchanting spiritual evening unveiled the truly musically gifted. The two-time Helen Hayes Award nominee Andrea Frierson crooned, swaying in heart-felt Ella Fitzgerald style to several melodic tunes. Ms. Frierson is also an accomplished writer and a Dramatists Guild Fellow. T. Oliver Reid, who has toured the country with his one man show, Drop me Off in Harlem, which one a Bistro Ward, is a fierce performer with the voice of a nightingale. He commands the stage as a virtuoso performer and perhaps most astonishingly sings like a lady of the opera equipped with the loveliest of voices. The provocative singer, Julia Hannon, a fifteen year old waif, delved into the most haunting of performances as she sang of aching love to the tune of terrifying captivation—falling under a lover’s spell. Another student performer, Luke Surretsky, wooed the audience and his parents with an homage to musical theater followed by a suave Frank Sinatra jingle. Diane Monroe, who boasts an extensive career in jazz with her long standing membership as first violinist of the Max Roach Double Quartet, mesmerized the audience by evoking the unique chords of folk, rock and blues from her violin. Ghai’l Rhodes Benjamin, performing her audacious, electrifying Talking Poems ignited the stage with a conflagration of the spoken word. Self-empowerment and positive reinforcement oozed from this award-winning Grammy nominated artist who has collaborated with the late grate Pete Seeger. Even Papa Marc was drawn to the stage, eyes wild and shinning, dancing about Ms. Rhodes to her harmony of words. Studio Senakwami, founded by the heart-warming John Senakwami, provides piano and vocal students with enriching, invigorating musical studies. With each performance, the young students, loftily perched at the piano, ran their tiny well-versed fingers across the ebony and ivory of dancing keys as an array of hopeful, elegant notes elevated the spirit and set the soul adrift. These performers, imbued with confidence, were praised by Mr. Senakwami, who is quite obviously a magnificent teacher and deeply cares about each of his pupils and their subsequent success in the arts. The children, pursuant to their performances, gently bowed in homage, since the evening was dedicated to Mr. Senakwami’s impressive piano teacher and beloved father, Papa Marc, who had turned ninety. Mr. Senakwami’s international background is evident in the varied range of music—from the classical composition of Nocturne Opus 9, No. 2 of Chopin and Sonatina in C, Op. 36, No. 1 by Clemente, to dreamy lyrical jazz, gospel and spiritual rhythms extending to Broadway’s Musical Theatre, thus capturing the universality of music world-wide. Ms. Adler and her soprano vocals were accompanied by the brilliance of the Julliard classically trained pianist, Orange Julius (Julius Rodriguez), who at the tender age of eighteen graces the stage with full bravado along with his exuberant band, the Big Beat. Particularly significant are the infused jazzy tones and subtly syncopated dance rhythms coupled with feverish orchestral colorings of ragtime. The Djembe, vibrant yet tamed in the capable bare hands of Mike Braugher, reinforced the saying of the Bambara people of Mali, “everyone gather together in peace” and solidified this drum’s purpose. David Rosenthal stroked the guitar strings as if he was in an ethereal trance and the virtuous Patrick Bartley passionately, evocatively elevated our hearts with his melodious saxophone. Spotlight concluded with the uplifting rendition of “Always be humble and kind” by Ms. Sowers Adler, and then an encore ensemble performance ensued leaving us captivated by the symphony of collaboration.