Corsage at the NYFF60 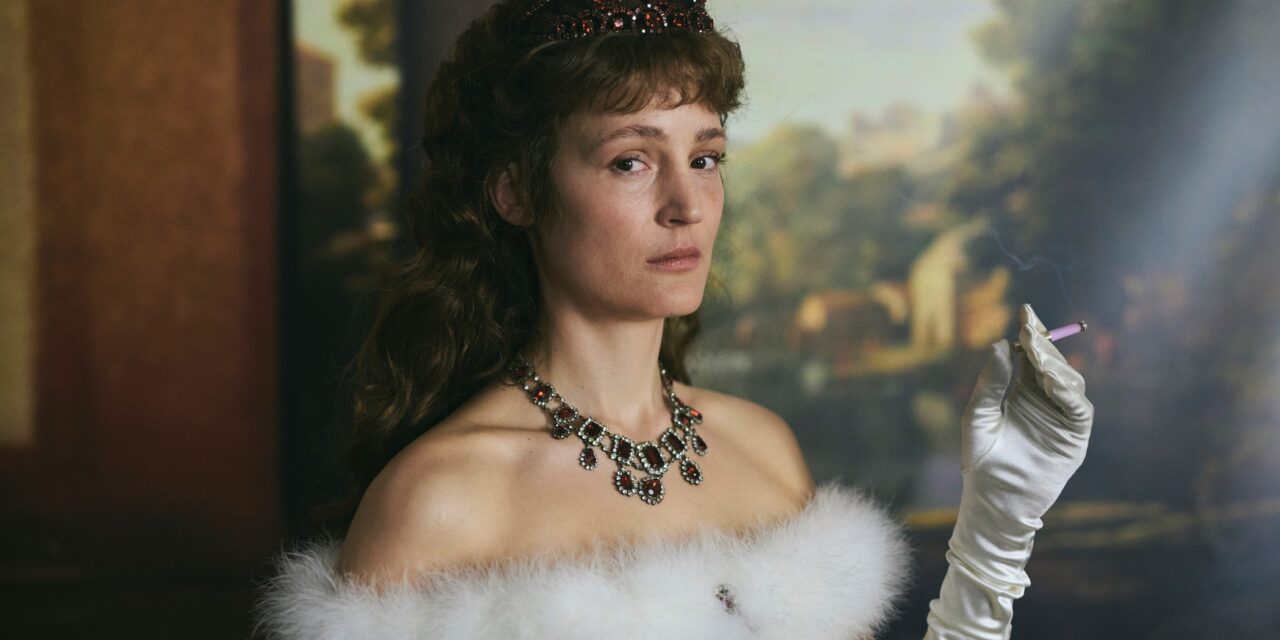 Once again, the New York Film Festival has an incredible slate of films created by global filmmakers who have been selected to present their work during the two-week long festival of screenings, red carpets and talk backs. The festival, which begins Friday, September 30 is in its 60th year and is in full swing after the vicissitudes brought by the pandemic of the last two years.

An intriguing film to watch out for is Corsage (corset or bodice in French), which was presented in the Un Certain Regard section at the Cannes Film Festival. Vicky Krieps (The Phantom Thread), won the prize for Best Performance for her luminous and inscrutable portrait of the subject of the film, the popular Empress Elizabeth of Austria, fondly nicknamed “Sissi.”

Vicky Krieps, who also produced Corsage, portrays Empress Elizabeth with nuanced range, ingenuity and vibrance, giving thematic depth to the film title which intimates concepts about gender restrictions, feminine identity, and the role of women as ornamentation in the royal society of the Austro-Hungarian empire in 1877. Kreutzer’s view of “Sissi,” is that of a unique, energetic, and brilliant woman constricted by her position and class, as her “corsage” constricts her breathing and mashes her organs together. The pain endured is so she may continue to be an icon of beauty, setting fashion trends and maintaining her public image by tightly lacing her “corsage” to achieve a tiny waist, that keeps her appearance youthful.

Kreutzer introduces us to Krieps’ Sissi in a bathtub where her maids count the minutes that she is able to hold her breath underwater. They comment that she scares them with her stunts, and they fear that she may never willfully come up for air and intentionally drown herself. It is a clue to her rigorous self-discipline. From this juncture on, we see Empress Elizabeth taking risks with her life and contravening the limits of her gender and social position. She refuses to act the demure lady, envisioning her royal position as imprisonment.

We learn that it is the eve of Empress Elizabeth’s 40th birthday. Her prime of life is over and in her own morose estimation, she is entering “old age.” Her role has been curtailed; she has no power or influence of her own, except to be an object to be gawked at and increasingly, as she ages, to dissolve into an invisible irrelevance.

Nevertheless, Sissi refuses to be “held in” by her husband, the Emperor Franz Joseph (Florian Teichtmeister), and her children, who criticize her for her improprieties. If she wishes to get up in the middle of a dinner that she refuses to eat because she must maintain her 16-inch waist, she violates protocol because she finds it to be meaningless. As she grows increasingly restless in Vienna, she tours Europe, visiting lovers and relatives, as she attempts to find a place of peace within herself, away from court life and its boundaries. She does this despite comments from her son and daughter. Also, she makes sure to find a mistress for her husband that he likes and frequents.

The film’s striking and beautiful scenic design is visually rich with gorgeous venues and lavish, opulent settings, revealing the lifestyle befitting the dual monarchy of Austria and Hungary. Kreutzer’s essentially truthful exploration of Sissi is always surprising and fanciful with crisp cinematic shots that launch into new events and places, as the Empress becomes involved in charitable work. Her visit to an insane asylum is an eye-opener. The scenes of Sissi’s visit to the war wounded reveal her empathy and her identification with those who suffer—she wants to help them and show her concern. Revealing this side of Empress Elizabeth’s personality, the director highlights her humanity and suggests that if she were not constricted by the folkways of court life, she most probably would have contributed more to bettering the culture and society.

In Kreutzer and Krieps inimical depiction of the Empress as a maverick and a feminist before the word was coined, we are transported back to that time so we might understand women’s frustrations at being confounded and oppressed by the patriarchy. The more vibrant, intelligent and imaginative the woman, like the Empress, the more devastated, the more cursed. Thus, to encourage herself, Sissi must resist caving to invisibility. She must constantly struggle to gain freedom to define her sense of self. The filmmaker’s and Krieps’ chronicle of Sissi’s resistance is authentically drawn with irony and power.

More than a lustrous costume drama of the late 19th century world within the Austro-Hungarian Empire, this interpretation of the amazing Empress’s inner life allows us to feel beyond the cardboard portrayals of royalty to understand Sissi’s quest to break free. She finally succeeds in the surprising conclusion. Though the ending is fictional, the director elevates Sissi to a heroine, who chooses a path which symbolizes her new freedom and statement to the world. Her choice is a reckoning with herself, her marriage and Europe, which she intuits is on the brink of transformation and modernity.

Look for Corsage on IFC and for tickets at the NYFF60 website: www.filmlinc.org/nyff2022/