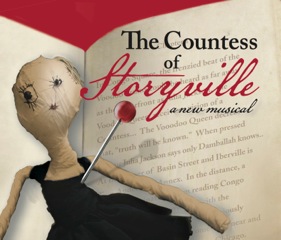 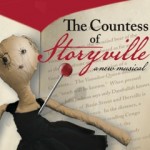 The Countess of Storyville tells the mystery-laden tale of “Countess” Willie Dupree, a celebrated Parisian prostitute, on the occasion of her 1910 return to New Orleans, the city of her birth, where her mother was executed for murder years earlier. Dupree is about to open a sumptuous new bordello in the Storyville red light district, the demimonde saturated in race and revolution, sex and secrecy – and voodoo.
The Countess of Storyville offers audiences a sweeping narrative of a fascinating era, a radiant score, and some very spicy characters,” says Amas Artistic Producer Donna Trinkoff. “I have been a fan of Joel Higgins and Martin Silvestri ever since their wonderful Johnny Guitar – The Musical played Off-Broadway several years back. Add R.M. Cohen’s taut storytelling and Lynne Taylor-Corbett’s expert direction, and this will be a show to savor.”
Joining Ms. Reed and Ms. Cox are Enrique Acevedo (Giant), Jeremy Benton (42nd Street), Lawrence Clayton (Bells Are Ringing), Peter Cormican (Lady in the Dark),Brittney Lee Hamilton (Cookin’), Jamie LaVerdiere (Memphis), Doreen Montalvo (In the Heights) and Paul Schoeffler (Rock of Ages). Additional casting will be announced at a later date.
The creative team is comprised of Dana Kenn (sets), Dustin Cross (costumes/props), Jason Kantrowitz (lights), Carl Casella (sound), Glen Kinnaird (technical director) andDave Pepin (musical director).
The Countess of Storyville will play the following five (5) performances: Wednesday February 12 at 7pm, Thursday, February 13 @ 2 pm & 7pm, Friday, February 14 at 1 pm, and Saturday, February 15 at 2pm. Tickets are free. For reservations call: 212-563-2565 or email boxoffice@amasmusical.org.
Amas Musical Theatre, now in its 45th year of continuous operation, is devoted to the creation, development and professional production of new American musicals through the celebration of diversity and minority perspectives, the emergence of new artistic talent, and the training and encouragement of underserved young people in the New York area. The most recent Amas Mainstage production, The Other Josh Cohen, received six 2013 Drama Desk nominations including Outstanding Musical, a 2013 Lucille Lortel nomination for Outstanding Musical, and a 2013 Off-Broadway Alliance nomination for Best New Musical. The production will open at The Paper Mill Playhouse in February 2014.