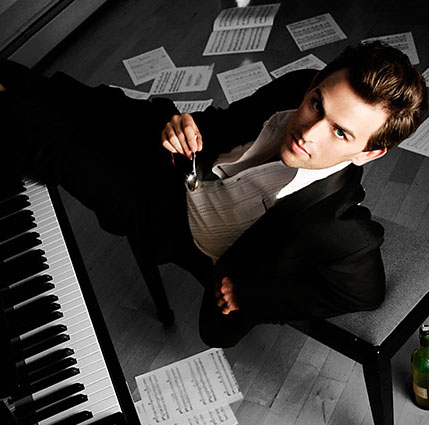 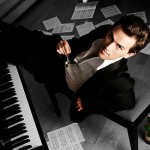 Daniel Reichard who made his Broadway debut playing and singing the part of Bob Guardio in the original cast of “Jersey Boys” and played in that mega hit for more than three years, made his  54 Below debut on December 10 in the best Christmas show of 2013, “Daniel Reichard’s It’s Christmas…Again!”

I first saw Reichard on stage in Goodspeed Opera’s live stage holiday production of The Muppets and Paul Williams “Emmet Otter’s Jug Band Christmas” which I raved about in my review for Cabaret Scenes.  Reichard played Emmet Otter and he was absolutely wonderful in his singing, acting and interaction with all those puppets and musicians on stage.

For 54 Below, Reichard assembled an extraordinary band under the direction of Adam Souza with Sean Driscoll on bass guitar, Steve Gilewski on bass and Adam Fischel on drums and percussion.  In the middle of the set suddenly three horns were added:  Jay Webb,  Greg Riley and Paul Arbogast!  Reichard, who has non-stop rhythm and superb body movements, opened with a boisterous and swinging “White Christmas.”  There was a wild Gershwin medley:  “Nice Work If You Can Get It” (with an interesting lyric slip) “I Was Doing All Right,” and especially swinging “S Wonderful!”  With a special verse about people at Christmas time not having any money for Christmas gifts, Reichard tenderly sang “I Can’t Give You Anything But Love,” enhancing that standard with beautiful sentiment.  He did “Have Yourself A Merry Little Christmas” with the original lyrics and his glorious voice was sweet perfection!  Another unusual selection was “Put On A Happy Face,” interacting with special members of the sold out audience which included his Tony Award winning co-star Christian Hoff.

Reichard’s version of “Christmas Song,” with a special trumpet solo, left no doubt that Reichard has the voice of an angel, especially when he effortlessly soars and holds the last note seemingly forever.

Reichard’s special guest was his co-star in “Forbidden Broadway,” award-winning comedienne Kristine Zbornik.  She appeared in the audience first, heckling him and was wearing a mini Santa outfit!  Together they did a hysterical version of “You Are Sixteen” and then Zbornik did her masterful Ethel Merman versions of “Away In A Manger” and “O Holy Night!”

Not to ignore those celebrating Chanukah during this season, Reichard rocked joyously through a sing-along “O Chanukah” getting the crowd to shout out “L’Chaim — To Life!” on cue which caused a standing ovation!

With full support of the great band, Reichard did some other very special rare Christmas songs but quieted down to sing, with piano only, a simple and reverent “Edelweiss.”  Seated at the piano, he sang another very unique song for his supportive mother who was in the audience.  Then the big band roared into action again for “Let It Snow Let It Snow Let It Snow,” appropriate for the cold weather outside.  After almost an hour, Reichard showed there was no fatigue in his very physical performance!  Another standing ovation.  What else could Reichard do but one of his hit numbers from “Jersey Boys.”  Everyone left this show full of Holiday Spirit no matter what the weather outside!

Daniel Reichard’s It’s Christmas… Again!, the best Christmas show of the season, is a benefit show for The Actors Fund, and repeats at 54 Below December 19 at 9:30 PM.  Reservations are strongly recommended for this great show.